You know what successful people do, Detective Bell? They get over shit. They move on. 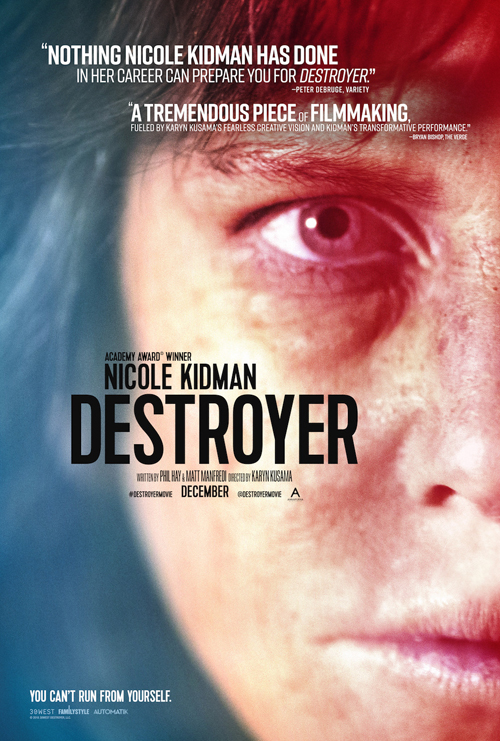 (SPOILERS) Karyn Kusama seems to get offered a steady stream of TV work these days, but her movie career has never quite taken off. Following the well-received Girlfight, Æon Flux was a well-documented disaster, and Jennifer’s Body was unable to capitalise on either Megan Fox or Diablo Cody, then both then in fashion, sort of. More recently, The Invitation proved a very pleasant surprise, one of those instant cult movies that, despite bearing a resemblance to other fare (I’ll say no more) managed to etch out its own distinctive furrow. She’s working from a screenplay by her husband Phil Hay (who writes with Matt Manfredi) again for Destroyer, but the results are less than compelling.

Hay and Manfredi also penned Æon Flux, which isn’t their fault either, but if you’re going to be charitable, then they’ve had a whole lot of bad luck that the likes of Clash of the Titans, R.I.P.D. and the Ride Alongs have turned out to be so inessential at best. Pairing with Kusama would appear to allow them to up their credibility rating, differentiating from more overtly commercial fare with something more dedicated to genre and allowing the writing and characterisation to shine. Except… well, with The Invitation, the concept was so strong, it carried the picture through any consequent rough spots. In Destroyer’s case, this is a character study first, granting Nicole Kidman her most striking face lift since actual face lifts and her nose job for The Hours, but managing to strike far too many clichés and indulgences en route.

Indeed, the most compelling elements are again ones based on plot twists rather than seeing a disintegrated soul on a last desperate quest for atonement. Thus, the reveal at the end of the identity of the body seen in the first scene is quite neat, and filling in that Kidman’s Erin Bell is so consumed with self-loathing and alcohol not only because her partner/lover Chris (Sebastian Stan) was killed during an undercover operation gone wrong, but also because she’d persuaded him that they should ditch their moral and ethical code and take their cut of the bank robbery for themselves. While the latter makes sense of the empty vessel Bell has become, the actual arguments her flashback self presents never really scan, perhaps because we aren’t presented with anything to show how she’d ended up in a place where she’d seriously consider that option.

As a result, while Kidman’s very good, one nurses the feeling throughout that there’s a lot of effort being put in for material that just isn’t up to the quality of the filmmaking. Destroyer further underlines that Kusama is one of the very best directors out there at the moment, whether it’s conjuring atmosphere, co-ordinating action or eliciting fine performances from her actors, but she really deserves that one classic screenplay that propels her into the big leagues. Too much of Destroyer, while framed as a serious, thoughtful character piece, is about genre posturing, whether it’s Bell getting all Dirty Harry on her contacts or doing a Keanu Reeves during a bank robbery and going in, automatic weapon blazing. Yes, you can point to the shape she’s in come the final scene, but that doesn’t retroactively make the rest of the picture more verisimilitudinous.

Talking of which, Toby Kebbell sports a ridiculous wig and never really quite comes across as a convincing criminal mastermind, while scenes like the Russian roulette one merely underline how indebted to tropes this is, rather than striking out on its own. There are strong supporting performances, and accompanying sequences, from Tatiana Maslany (as Kebbell’s girlfriend) and Bradley Whitford (as his cocky lawyer). But there’s also an entirely redundant and entirely rote subplot regarding Bell’s estranged daughter (Jade Pettyjohn) and the jerk older boyfriend Kidman tries to pay off (Beau Knapp). Indeed, it’s this more than anything, the part of the movie that’s supposed to underline how much substance it has, that ultimately exposes it as rather shallow in its workings.

I had high hopes for Destroyer after being so impressed by The Invitation, but I came away thinking it was just so-so. Hopefully its box office failure (another strike against Annapurna, although this one at least came cheap) won’t be a blow against Kusama making her next movie very soon.