You sucked my arm off! 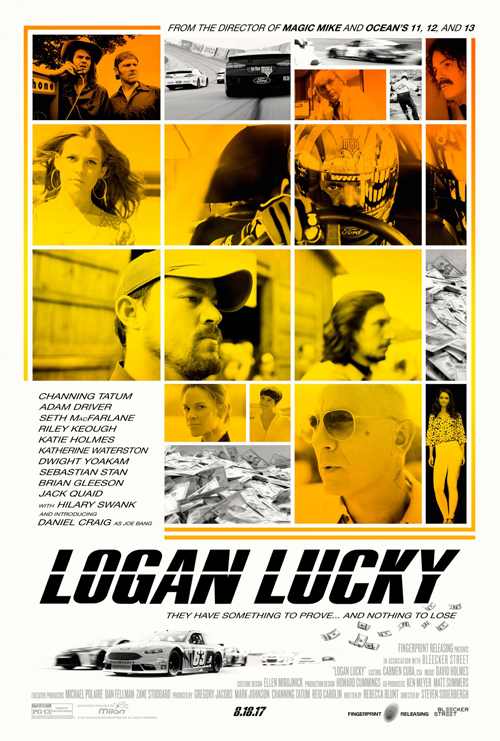 (SPOILERS) I suppose it’s quite sweet that love and devotion dictated Steven Soderbergh’s return to big screen moviemaking, if reports of the true identity of Logan Lucky’s screenwriter are accurate (his wife, Jules Asner, under the pseudonym Rebecca Blunt). I’d say I can’t see any other good reason for having made it, but I’d say that of most Soderbergh fare (including ones shot on an iPhone or with a handycam or even an instant polaroid).

Logan Lucky’s a heist picture, hence Soderbergh self-referencing the gang as “Ocean’s Seven-Eleven”, but it’s a heist that never really takes off, that you never really care about, despite his employing the usual sleight of hand and a jaunty David Holmes score accompanying the action. Ocean’s Idiots might have been a better moniker, given most of brothers Jimmy (Channing Tatum) and Clyde Logan’s (Adam Driver) accomplices are dim-watt bulbs. And they too, we are led to believe, aren’t so bright either. This, however, certainly in Tatum’s case (and it isn’t hard to believe Tatum is dim-watt), is a conceit, as revealed in de rigueur flashback showing how he got away with a robbing a tidy sum from the Charlotte Motor Speedway.

Nevertheless, much of the movie is predicated on how dumb the residents of North Carolina are, how dumb their accents are and how slow their mental processes are. You really need affection for yokel locals to make this kind of thing work, and even if casting likeable Tatum and Driver gives you a head start, Logan Lucky – a terrible backwards title, that did as much to put me off seeing it as Soderbergh’s presumed arbitrary selection process for material – has a director for whom affection for subject matter as never been in plentiful supply. Even as Soderbergh – apparently – wants you to sympathise with his heroes, he’s mocking Jimmy and his family for allowing their daughter to enter one of those grotesque child beauty pageants (because inbred fools like that kind of thing, as opposed to Hollywood paedophiles).

Without investment in the characters, it’s difficult to care much about the heist, which in any case has to work, reveal-wise, by concealing significant parts of it. We already know Jimmy can’t be that dumb anyway, since his plan to spring Joe Bang (a bleached-blonde Daniel Craig having a wild time) and then reincarcerate him is a pretty good one (if pretty unlikely – it would only work in a movie operating in a Danny Ocean reality). It’s a sure sign of how unrefined the material is that Hilary Swank and Macon Blair are wheeled on in the last twenty minutes to provide an investigation into the heist, and thus a vindication for Jimmy’s genius. Structurally, it makes the picture look like a prize booby.

I did like that one of the demands made by the rioting inmates was George RR Martin completing The Winds of Winter. And Dwight Yoakam makes an impression as the prison warden; elsewhere, luminaries wishing to work with the great Berg who is not Steven are short changed; besides Swank and Blair, that includes Sebastian Stan, Katherine Waterston, Katie Holmes, Riley Keough and acting dynasty guys Brian Gleeson and Jack Quaid. Also appearing, in a horribly unfunny role, probably because he’s horribly unfunny, is Seth McFarlane, sporting a horrible Cockney accent. He’s treading in the not-so-proud footsteps of previous Soderbergh veteran Don Cheadle there (either Soderbergh has a tin ear, or he really likes crap British accents).

Logan Lucky didn’t do the kind of business its director hoped for, particularly since he self-distributed. Still, he had a deal with Amazon Prime even before it hit cinemas. Now, of course, he has set up shop at Netflix. He’s attained the level where just having him work for you derives status, regardless of content.

Sir, I’m the Leonardo of Montana.

October 23, 2014
The Young and Prodigious T.S. Spivet (2013) (SPOILERS) The title of Jean-Pierre Jeunet’s second English language film and second adaptation announces a fundamentally quirky beast. It is, therefore, right up its director’s oeuvre. His films – even Alien Resurrection , though not so much A Very Long Engagement – are infused with quirk. He has a style and sensibility that is either far too much – all tics and affectations and asides – or delightfully offbeat and distinctive, depending on one’s inclinations. I tend to the latter, but I wasn’t entirely convinced by the trailers for The Young and Prodigious T.S. Spivet ; if there’s one thing I would bank on bringing out the worst in Jeunet, it’s a story focussing on an ultra-precocious child. Yet for the most part the film won me over. Spivet is definitely a minor distraction, but one that marries an eccentric bearing with a sense of heart that veers to the affecting rather than the chokingly sentimental. Appreciation for
Post a comment
Read more