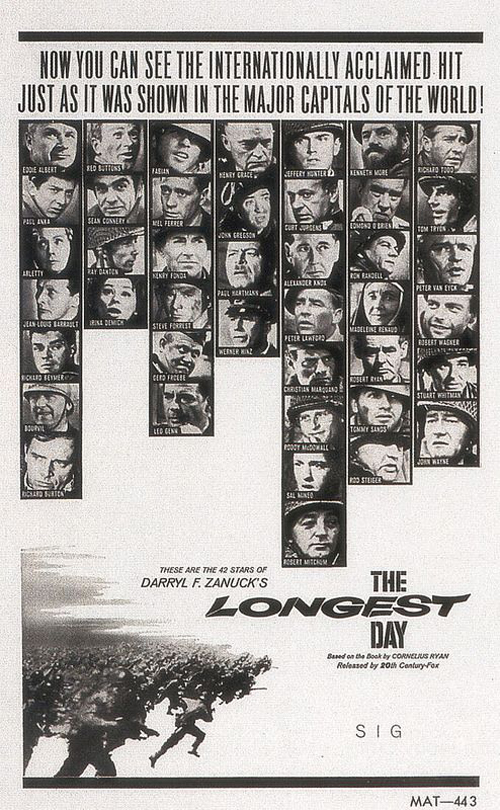 (SPOILERS) It certainly felt like it. Three interminable hours that even playing “spot the star cameo” couldn’t relieve. It’s salient to note that both this and A Bridge Too Far were based on epic accounts of epic wartime operations by Cornelius Ryan, but whereas William Goldman managed to turn the latter into a surprisingly remarkable screenplay and Richard Attenborough into a surprisingly good film, here Ryan, adapting himself (with additional material credited to four other writers), induces mostly lethargy. He never finds an effective means to thread the various incidents and beachheads and responses together into a coherent whole, so you’re left with material that feels rather formless and directionless.

Of which, there were three credited directors (Ken Annakin, Andrew Marton and Bernhard Wicki for British and French, American, and German scenes respectively) and two uncredited (Gerd Oswald and producer Darryl F Zanuck), which isn’t a case of too many cooks so much as the ones in charge of the menu picking flavourless dishes. Numerous pieces are set up in the D-Day landings, but without any sense of co-ordinating tension between them.

As problematic is that the star power on display is rarely in service of relatable characters, involved in a relatable way with the action. The likes of John Wayne (in a role Chuck Heston failed in his bid for), Richard Todd (playing a major in the bridge assault he was actually a part of), Henry Fonda (as Theodore Roosevelt Jr), Robert Ryan and Robert Mitchum play real-life figures involved in the landings but lend little impact other than “Oh look, it’s…” Kenneth More is alone among his peers as Captain Maud, on Juno Beach with his bulldog (Churchill, natch), complaining in highly oblivious, upper-crust British manner about incidentals (“The Sooner you people get off the beach, the sooner they’ll stop this blasted shelling! It’s very bad for the dog”).

Faring better are the invented troops, many of them grunts. Yeah, there are fairly non-descript and earnest roles for the likes of Richard Beymer (just off West Side Story), Robert Wagner and Jeffrey Hunter (not yet Captain Pike). But we also get Roddy McDowall providing some nervy honesty (along with Richard Burton, he took a break from the interminable Cleopatra to provide a gratis cameo, just to do something, anything) and Leslie Philips sporting a truly massive moustache. Gert Fröbe also shows up, as does Sean Connery, pre-Bond as a chipper work-shy Scot (“Yeah, it takes an Irishman to play the pipes”) and André Bourvil, in basically the same role he’d play in Anakin’s later Monte Carlo or Bust, is a pissed Frenchman.

Only a couple really stand out in the context of what the film is nominally trying to achieve, however. In fact, ironically, the MVP is Burton, who in about two scenes gives you a glimpse of how this could have been, if the makers had intended to make something other than mere empty spectacle. In the first, his fighter pilot explains where a pal, Johnny, has disappeared to (“At the bottom… of the channel”) and in the second, Beymer comes across him, bleeding out, his leg stitched together with paperclips (“I’m dying for a cigarette”). He asks Beymer if he has ever killed a man, before admitting of his felled opponent, “Neither had I, face to face”. You can only really make a claim to Burton, Connery and McDowall offering that bit extra to the standard fare.

There are heroics, of course, and blunders (be it Germans ignoring the obvious or US paratroopers mown down when the drop zone is overshot), and human touches, but very little exerts a dramatic hold. And there are memorable vignettes: a priest in search of his submerged communion set; homing pigeons heading in the wrong direction (“Damn traitors!”); nuns arriving to help the wounded but looking as if they’ve stepped out of a Python sketch. There’s also a genuinely fascinating scene regarding the fake paratroopers (“He’s um, a very extraordinary fellow, Rupert. He’s a sort of weapon – send them to hell”). But it amounts too little and fails to adhere.

According to Anthony Holden’s The Secret History of the Oscars, The New York Times levelled the charge at block vote-controlling studio moguls of behind the scenes “vote-swapping of outrageous proportions” with regard to the Best Picture nods for this and Mutiny on the Bounty: blockbusters that, rather suspiciously, had no nominations in the directing, acting and writing categories. Zanuck, unsurprisingly, defended himself against such claims. It’s quite believable, as this is clearly a nomination for size and expense (a price tag between $7.75 and $10m), not quality. The Longest Day won two Oscars (Cinematography and Special Effects), but a production so turgid should never have been in line of sight of the big prize.