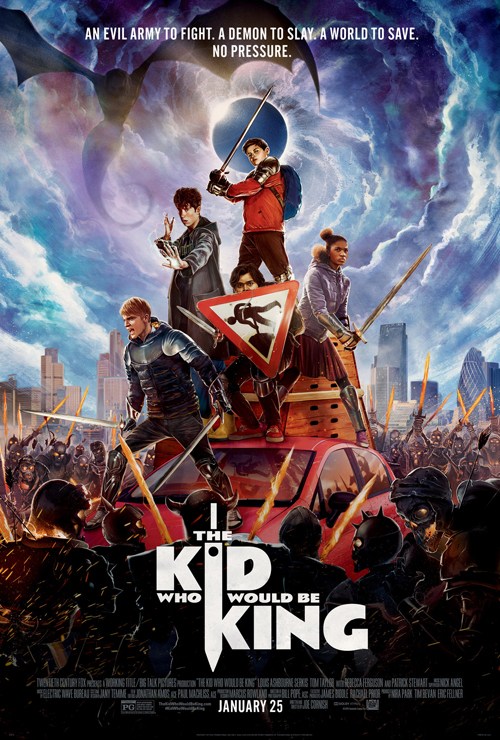 (SPOILERS) Joe Cornish generated such goodwill with Attack the Block – admittedly, I wasn’t its greatest fan – that I suspect no one really wanted to admit The Kid Who Would Be King, his belated follow up was a bit of a damp squib. This modern-day Arthurian retelling but with kids in the key protagonist roles may appear to have sufficient reconfigured cachet to appeal, but it’s mostly rather derivative, and that’s without even considering the patchy lead cast.

Because with a kids’ film – and perhaps the box-office kiss of death, this is definitely a kids’ film, rather than family fare – you’re stranded if you don’t have strong leads carrying you through rough patches of over-emoting and heroic junior challenges. Andy Serkis’ son Louis does his best, but he isn’t that lead (Alex), while at least two of his valiant knights (Dean Chaumoo as Bedders and Rhianna Doris as Kaye) also fail to bring much that’s memorable to the material.

On the plus side, Tom Taylor is a believably arrogant toff bully as Lance (with neat use of the legend’s rifts to turn him from aggressor to champion) and, MVP, Angus Imrie, Celia’s son, is an absolute standout as Merlin. He brings exactly the exuberance the whole movie needed – energetic, spirited, funny, slightly madcap – and when he’s onscreen, for the most part, Cornish’s slightly tired vision slots into place. That’s particularly true of the early passages, where Merlin announces himself as a pupil at Alex’s school (“And I am a perfectly normal British school boy”), casts spells on all and sundry, and offers appealingly archaic phrasings. Indeed, I could easily imagine Imrie being cast as Doctor Who in a few years. If there still is a Doctor Who in a few years.

Unfortunately, Cornish also decides to include what, on paper, probably seemed like a good move and financially a no-brainer: having an older Merlin (he ages backwards, nonsensically) turn up periodically. This is clearly designed as a dramatic anchor and showstopper, but entirely serves to undermine Imrie’s presence and the excellent work he is doing. And worse, lurch the proceedings into crashing dullness, because he’s played by no one’s idea of a sure wit, Patrick Stewart (if you need to recall, exactly, just look at who he was playing in John Boorman’s definitive cinematic telling Excalibur). It’s really quite rude to the young actor, in fact, particularly when the meaningful goodbye to Alex is reserved for Merlin the elder.

Cornish nurtured the germ of his idea for decades, which sometimes works out very well – Luc Besson and The Fifth Element – but in this case never seems like it had sufficiently striking ideas in the first place to justify its translation to screen. Excalibur’s found on a building site, Neolithic temples are transportation gateways, and the Lady of the Lake raises Excalibur in a bathtub (okay, the last one is pretty good). The visuals for the demon horsemen sent by Morgana (Rebecca Ferguson, not especially memorable) are decent design-wise, but the effects generally, including bat Morgana, aren’t supported by the budget.

Where Attack the Block managed to make a merit of its small scale, here Cornish’s reach exceeds his grasp, with the consequence that, more often than not, The Kid Who Would Be King feels rather twee, like a CBBC concept on a slightly more cinematic canvas. This reaches its most underwhelming realisation when the entire school are trained in battle manoeuvres ahead of the coming eclipse and the arrival of the demon hordes.

Cornish throws in various thematic arcs about honesty and trust (the “Chiv-alric Code”), but they take on no real meaning as his young leads can’t carry them. And while he his moments visually (he has Bill Pope on board as cinematographer, so he should), the picture lacks a sufficiently distinct stylistic tone to underpin the mythic present (he probably should have looked to The Fisher King, where ironically the mythic was only in the head of one of its protagonists).

One’s left with the feeling of a movie a parent makes for their kids – aside from a brief political swipe at the end, that “A land is only as good as its leaders and you will make excellent leaders” – rather than seriously considering how it’s going to work for a wider audience. Even if it does end with a small boy cutting a woman’s head off. I’m doubtful that, with a stronger lead, The Kid Who Would Be King would have landed, and it’s telling that the picture could more satisfyingly have ended at a point when there’s well over half an hour to go.