It’s a comedy and it's sex and it's action. It’s a total entertainment experience. 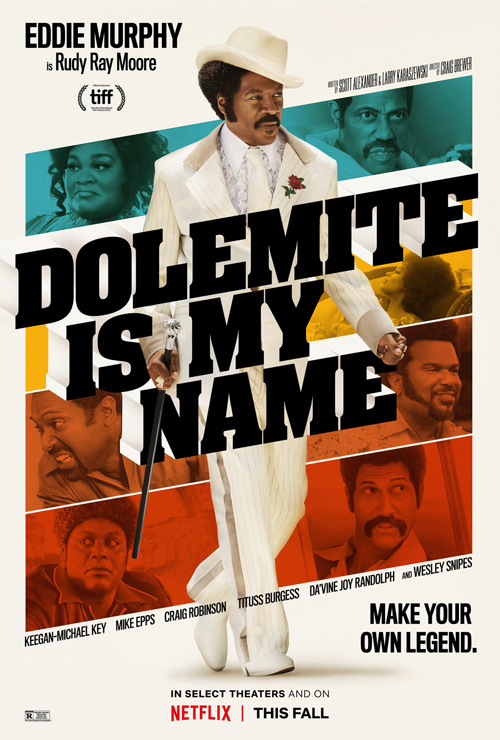 (SPOILERS) Eddie Murphy’s Rudy Ray Moore biopic, charting Moore’s rise to fame in Ed-Wood-who-could blaxpoitation movie Dolemite is breezy and enjoyable, brimming with performers clearly having a very good time and overseen by director Craig Brewer with an easy zest that bodes well for the forthcoming Coming 2 America. It’s the best thing Murphy’s done in years. But still, it never feels quite as turbo-charged or uproarious as it promises to be.

Writers Scott Alexander and Larry Karaszewski have past form in the unlikely biopic stakes, some top of the heap (Ed Wood) others more commonly nearly but not quite there (The People vs. Larry Flynt, Man on the Moon, Big Eyes). Dolemite Is My Name is definitely in the latter category, even though it shares with Ed Wood an enthusiasm for the enthusiast who rises above the “so-bad-its-good” nature of their “art”; it’s that kernel of self-belief that rings through for both. In Moore’s case that infectious flair is embodied by Murphy with such verve that it’s very easy to watch Dolemite Is My Name and just take in his gleeful performance, not caring too much that the movie isn’t enormously funny (it is great fun, however) and doesn’t have a great deal of narrative drive (scenes tend to happen one after another, and Alexander and Karaszewski haven’t really cracked the story beyond “Moore becomes famous”).

But you can get away with a lot if you repeat “Rat soup eatin' motherfucker” enough times. Brewer’s rendition of the early ‘70s is very much in the broad tradition of a faux-period comedy, with the pristine hair appliances, big collars and flares, rather than attempting to muster the seedy, run-down quality of the movie that inspired it. It’s also peppered with era-appropriate references to the likes of Bill Cosby and Billy Dee Williams, and at one point, Moore takes his entourage to see Billy Wilder’s remake of The Front Page, over the likes of Shaft, to collective disappointment (“Nobody even got naked”).

Ostensibly, Moore has rather let everything pass him by at the start of the picture, MC-ing in a club but not making it himself (“Hey, man. How’d my life get so damn small?”) But when he’s inspired to make a movie out of the Dolemite character, everything falls into place rather too effortlessly, even as we’re told of the challenges he faces (“Well, you understand, you’re not supposed to make a movie for the five square blocks of people you know”). He finds his director in actor D’Urville Martin (major credit: lift operator in Rosemary’s Baby), and even though the latter’s initial enthusiasm (“This is cinemagical reality”) and interest in the plot issues (“Wardens don’t investigate!”) quickly turn to disdain/disinterest, the home-made promotional element of the picture ensures that the single theatre it’s showing in soon attracts the attention of an actual distributor (Bob Odenkirk).

And when Dolemite gets that broader release and begins attracting reviews, even these can’t bring Moore down. “Perfect!” he exclaims of a verdict pronouncing “Dolemite isn’t fit for a blind dog to see. It is coarse, crude, rude and vulgar”. Murphy’s ably supported by Keegan-Michael Key (as the screenwriter) and Craig Robinson, although it’s Snipes who walks off with the honours as the vainglorious director. Kodi Smith-McPhee is Josef Von Sternberg’s son and the cinematographer (if you’ve seen Dolemite, you’d be forgiven for thinking there wasn’t one) and there are cameos from Snoop Dogg and Chris Rock.

What Dolemite Is My Name needed, I suspect, was some essential conflict or tension to sustain the laughs, as without it, it tends to the likeable but slightly too effortless. Maybe such a spur was in Alexander and Karaszewski’s original screenplay (it seems it was more a full biopic than focussing on the production of Dolemite), as there are certainly such elements in their other scripts. Dolemite Is My Name is very likeable, but most of that is down to Murphy’s relish for his role.