It’s easy, really, if you’re clever. An invisible man can rule the world! 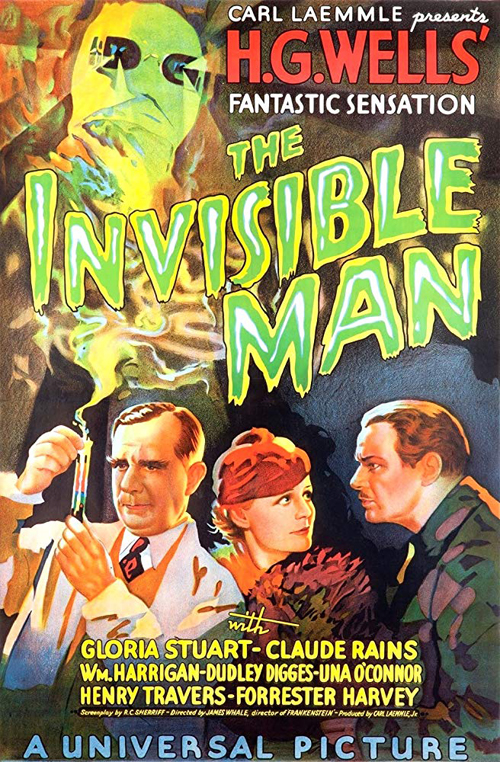 (SPOILERS) James Whale’s most celebrated features may be his brace of Frankensteins, but this, his other contribution to the Universal horror cycle (The Old Dark House presumably doesn’t get officially included as it lacks their classic monsters), ought to be mentioned in the same breath. Superbly spoofed by Joe Dante in Son of The Invisible Man for Amazon Women on the Moon (below), it doesn’t actually need that kind of undercutting, as its hearty – and twisted – sense of humour shines through throughout. Much of which can be attributed to a magnificently full-blooded performance from Claude Rains.

RC Sherriff furnished the HG Wells adaptation, with uncredited contributions from Preston Sturges and Philip Wylie; the latter’s The Murder Invisible was responsible for much of the madness infusing the movie. One gets the impression, however, that the most mirth-inducing contributions came from Whale (of whose oeuvre Ian McKellen awarded the overview “camp”). Certainly, the antically-pitched short fuse of Rains’ Jack Griffin is consistently the highlight of The Invisible Man, usually accompanied by condescending jibes or grim intentions. And diabolical megalomania. Wells reputedly objected to the picture taking his brilliant scientist and turning him into a lunatic (although he’s arguably a psychopath anyway in the novel, and undoubtedly goes mad), but really, that’s the entire reason the picture works so well (notably, Paul Verhoeven’s more recent take, the patchy-at-best Hollow Man, picked up on the side effect of the process causing derangement).

Griffin: Your father? Clever? Huh! You think he can help me? He’s got the brain of a tapeworm, a maggot beside mine!

Griffin’s ready line in insults is hilarious, brushing off the idea that fiancée Flora’s (Gloria Stuart, later of Titanic fame) father can be any help (above). Mind you, he may be on to something, since Cranley (Henry Travers) comes out with gems like “It’s a good thing to go away when you’re finishing a difficult experiment”. He also displays instant enmity towards the innkeeper (Forrester Harvey) and his wife (an uproariously overwrought Una O’Connor), leading to his throwing the former down the stairs. Indeed, his deranged violence is almost as amusing as his verbiage, so sadistically extreme is it; he puts an end to the chief of police with a stool (“A stupid policeman. Smashed his head in”); The constable is surprisingly sensible in contrast, instantly twigging what is going on despite his superior’s denials (“He’s invisible. That’s what’s the matter with him”). Later, Griffin ambivalently causes a train crash that costs hundreds of lives and throws a couple of individuals searching for him off a cliff.

Kemp: Straightforward scientists have no need for barred doors and drawn blinds.

It’s old colleague Kemp (William Harrigan) who’s reserved the lion’s share of the enmity, however, in contrast to the novel. We know he’s trying to muscle in on Flora (she tells him where to go), so our sympathies are limited anyway. Consequently, following Griffin’s rather tactless attempt to solicit his services (“We’ll begin with a reign of terror. A few murders here or there”), we’re not overly concerned to learn of his plan to take a terrible vengeance on Kemp. And in contrast to suitors in previous Universal horrors, there’s no escape for the character, who’s seen off with a particularly pithy “I hope your car’s insured, Kemp. I’m afraid there’s going to be a nasty accident in a minute. A very nasty accident” just before he’s sent over a cliff.

We learn that monocane has messed with Griffin’s mind (“The drugs I took seemed to light up my brain”), and when they aren’t causing him rages, they’re leading to frivolity, with him singing “Here we go gathering nuts in May” and “Pop goes the weasel!” (the latter on robbing a bank). He also steals a policeman’s trousers and runs around in them, frightening passers-by, laughing manically. In fact, Rains’ greatest claim to fame here is his magnificently insane laugh.

Whale’s direction is superb, ably supported by cinematographer Arthur Edeson’s atmospherics. The snowy opening shot is a thing of beauty, and if the English village is definitely Hollywood transposed, it’s also clearly possessed of an authentic eye. The picture moves along at a clip, even today, fast and funny, and that’s down to a combination of Whale’s sense of pace and the urgency Rains brings to his protagonist/antagonist.

Kemp: He meddled in things men should leave alone.

Naturally, there needs to be a moral coda, in which, having been burnt out of a barn (very Frankenstein), Griffin is shot by the police. Ironically, The Invisible Man then finds Griffin echoing Kemp’s words when he confesses “I’ve meddled in things that man must leave alone”. While there’s much to be said for not allowing science to advance unchecked, Kemp’s notion of responsible progress was developing new methods of preserving food, which as we know don’t do anyone any harm at all. So maybe Griffin wasn’t so bad after all.