This sucks! It sucks the biggest mega balls in the history of shitty ball-sucking! 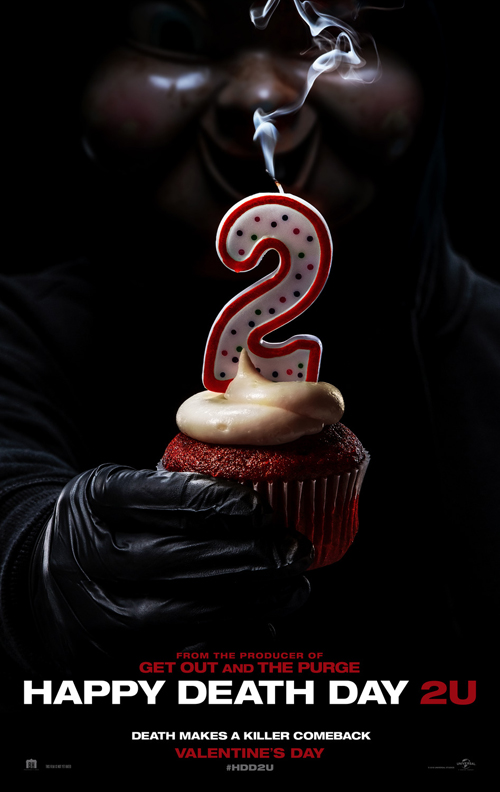 (SPOILERS) The biggest failing of this sequel to the surprisingly witty 2017 Groundhog Day horror is that it stops short of fully embracing the out-there potential of invoking Back to the Future Part II. Instead, writer-director Christopher Landon opts to coast somewhat on a what-if scenario in which returning protagonist Tree (Jessica Rothe) gets to experience an alt-reality where her mum never died, and she must decide whether to give that up to get back to her own universe.

Which is agreeable enough, but hardly trailblazing in terms of plotting. As before, Happy Death Day 2U is at its best when utilising Rothe’s winning comedic skills, and the first 45 minutes or so provide a rush of ideas and gags on a par with the original. Tree’s fury at find herself back in a time loop is hilarious, but the potential of revealing Ryan (Phi Vu) as the murderer – trying to kill himself in order to stop the experiment that activates the loop – is never fully explored once the alt-world is entered. Instead, we’re provided mere variations of established relationships (Israel Broussard’s Carter is now going out with Rachel Matthews’ vacuous Danielle, Ruby Modine’s Lori is not Tree’s murderer at all) and a race against time/ deaths to solve the equation that will send Tree back.

Landon is at his best in a montage death sequence invoking Groundhog Day but with added twisted relish, as Tree, in an attempt to avoid Babyface despatching her every day, opts to off herself by bathtub electrocution, drain cleaner, diving into a tree shredder and leaping out of a plane in nothing but her skimpies.

By its more playful nature, this is less demonstrably a horror movie than its predecessor, which may ultimately have damaged its box office; it came in cheap, as is invariably the case with Blumhouse fare, but it made half the original’s gross, which appears to have put the kibosh on a third instalment. In place of scares, we get a higher humour quotient (“Shut up, fake Ryan”; “Do I look like someone who knows what a multiverse is?”; "All I know is, acting blind is probably harder than actually being blind”; “Your hand smells like cheese”) and more emotional content, but at the sacrifice of freewheeling tension; if Landon was going to replace the shocks with anything, it needed to be that brand of Back to the Future Part II breathlessness.

The credits scene is curiously acidic, however, given the movie’s doing its best to show Tree’s softer side. Which means that, while I’d spent much of the second half hoping for more of Tree’s raging splenetic side – easily her most entertaining emotional state – her volunteering Danielle to DARPA as a test subject, so condemning her to a time loop, is pretty twisted. I’m not sure, on this evidence, that Landon really had the material to justify a Happy Death Day 3, but I don’t doubt he’d have made it breezily watchable.