And my father was a real ugly man. 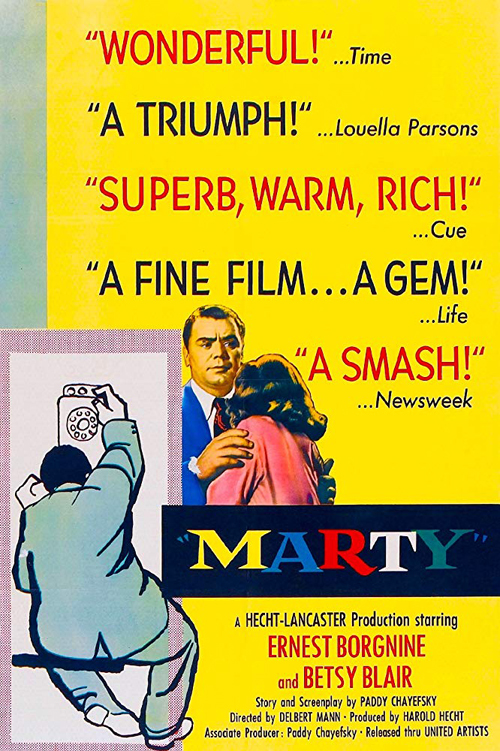 (SPOILERS) It might be the very unexceptional good-naturedness of Marty that explains its Best Picture Oscar success. Ernest Borgnine’s Best Actor win is perhaps more immediately understandable, a badge of recognition for versatility, having previously attracted attention for playing iron-wrought bastards. But Marty also took the Palme d’Or, and it’s curious that its artistically-inclined jury fell so heavily for its charms (it was the first American picture to win the award; Lost Weekend won the Grand Prix when that was still the top award).

Perhaps it was the way Marty carried with it an upfrontness, and unabashed sense of honesty, as epitomised by its title character, that felt fresh. That, and its (TV) play origins, of a mere two years earlier, pitched as “a guy who goes to a ballroom”, are never in doubt. It’s an interior, character-driven piece of one-on-one conversations, regardless of the exteriors director Delbert Mann (also the director of the Philco Television Playhouse production) brings to the material. Rod Steiger led the TV version – there are different accounts of who didn’t want him in the film, Steiger himself or producers Harold Hecht and Burt Lancaster – which ran a half hour shy of the feature version, but Marty the movie nevertheless ranks as the shortest Best Picture winner.

That’s a blessing, in that it doesn’t outstay its welcome, but I have to agree with Tony Schwartz’s New York Times critique of the TV version’s “stilted subplot about his mother’s attempts to convince a sister to move into their household”. However, that element, also found here, does serve to emphasise the bind of Marty Piletti’s situation, 35, living with his mother and constantly being harangued that he “should be ashamed of yourself” for not being married; when he does find someone, everyone it seems, from his best friend to his mother, suddenly wants him to be exactly the Marty he always was, which offers them a familiarity and a safety zone. For his part, every romantically-inclined social interaction is painful: “I’m just a fat, ugly man” and “Whatever it is that women like, I ain’t got it”. He’s entirely matter-of-fact about his lot, but gets on with his (lack of) life anyway, and as such, you can’t help but sympathise with him.

Marty’s turning point when it comes is genuinely touching, meeting Clara (Betsy Blair, Gene Kelly’s wife and then blacklisted), who has already been snubbed at the ballroom by someone upset at finding himself with “a dog”. “Dog” evidently meant something of what it means now then, although I suspect it was slightly less derisory, or we wouldn’t have such blunt dialogue as “You see, you’re not such a dog as you think you are” and “See, dogs like us. We ain’t such dogs as we think we are”.

Blair, who was also nominated, gives a very understated, keenly self-aware performance, as downtrodden as Marty and just as resigned to her situation. The scene in which, having returned to his house, she resists letting him kiss her, is quite shocking in its way (“All I wanted was a lousy kiss!”), suggesting an undercurrent of rejected rage even as Marty epitomises the mild-mannered lug, instantly regretting his outburst (Chayefsky argued there were intentional undercurrents in his play, of both Oedipal and latently homosexual nature, the latter of which he considered worthy of a study in the “normal” American male; those elements, particularly in respect of best pal Ange’s annoyance and the manner in which his pals are all talk, remain resonant in the picture).

One of the main rumours you’ll read about Marty is that Lancaster and Hecht had expected to claim the movie as a tax write-off, so convinced were they it would lose money. But it has other notables to its name also, including being the first American film since World War II to be shown in the Soviet Union. It’s perhaps debatable whether Borgnine would have snagged the Oscar with the benefit of hindsight, since Frank Sinatra, Spencer Tracy and most of all a posthumous James Dean were in the running, and given that his subsequent career was very much not that of a lead player.

As for its Best Picture win, it remains innocuous, a blue-collar Joe movie à la Rocky, but without that film’s get-behind-him, path-to-glory element. Another adaptation, Mister Roberts, is the better known and probably more loved nominee today, although Pauline Kael could be relied upon not to like either much; Marty was “small-scale, overly celebrated” and victim to Chayefsky’s “insistence on the humanity of “little” people, and his attempt to create poetry out of humble, drab conversations”. I think she’s too harsh on it; whatever faults it has are writ large in the indulgent scenes between the mother and her sister, but the performances of Borgnine and Blair ensure the picture remains genuinely affecting.