Do forgive me for butting in, but I have a bet with my daughter that you are Hercules Porridge, the famous French sleuth. 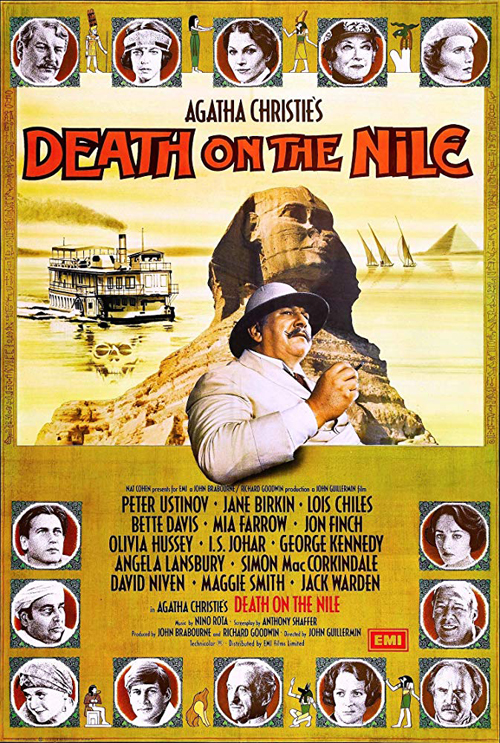 (SPOILERS) Peak movie Poirot, as the peerless Peter Ustinov takes over duties from Albert Finney, who variously was unavailable for Death on the Nile, didn’t want to repeat himself or didn’t fancy suffering through all that make up in the desert heat. Ustinov, like Rutherford, is never the professional Christie fan’s favourite incarnation, but he’s surely the most approachable and engaging. Because, well, he’s Peter Ustinov. And if some of his later appearances were of the budget-conscious, TV movie variety (or of the Michael Winner variety), here we get to luxuriate in a sumptuously cast, glossy extravaganza.

I’m not sure you’d label John Guillermin as one of the directing greats, and certainly later in his career such dubious follies as King Kong and Sheena bore testament to this, but with a screenplay from Anthony Schaffer, who had previously done the duties on Murder on the Orient Express and would adapt two further Christies, cinematography from Jack Cardiff and Nino Rota writing the score, he has surrounded himself with talent. If nothing else, the picture is a magnificent travelogue, albeit once things get murderous we’re paddle steamer bound for the duration.

It’s been said (by Brian Aldiss) that Christie only decided who the murderer was in her novels based on who remained most unlikely when she reached the last chapter. She’d then make the necessary alterations to ensure they fitted; Christie biographer John Curran disputed this. Nevertheless, Death on the Nile could be argued to operate by the “least likely” scenario, to the extent that Poirot has ruled out the perpetrators, and if you were to go by PD James’ supportive assessment that it was always the least likely who dunnit, the shoe would fit. Accordingly, while the plot allows for the unlikeliness of the murderers’ plan succeeding by having not one but two other parties witness their deeds, it does little to alleviate the notion that they settled on the most convoluted and precarious method to dispatch their victim.

Structurally these stories are pretty much of a piece, with Poirot duly plying the established ensemble of motivated suspects with scenarios whereby they had inclination and opportunity to do the deed. The fun is usually seeing the supporting cast put through their paces, and that’s doubly so in this instance, with Ustinov pushing and prodding them in between having his nationality impugned (“Belgian upstart, please madam”; “Belgian. Belgian heavesdropper, sir”; “We are not in Paris now”: “Brussels, sir!”) That’s never more so than here, after Lois Chiles’ rich heiress receives a bullet in the brain.

David Niven provides smooth sidekick duties as Colonel Race, '70s disaster movie specialist George Kennedy brings his ensemble flair to bear, and Bette Davis provides the old pro cred that Lauren Bacall did in Murder on the Orient Express. Swap that film’s Vanessa Redgrave out for an amusingly ill-tempered Maggie Smith, add in a supremely hammy Angela Lansbury (“What a perfectly dreadful woman” observes Niven acutely), Jack Warden taking a stab at a Swiss accent as an unorthodox doctor (“I prescribed a course of armadillo’s urine”) and Mia Farrow playing a character tailormade for anyone on Woody’s side, and there’s no shortage of attention seeking. Chiles, Jane Birkin, Jon Finch, Olivia Hussey and Simon Manimal MacCorkindale are relatively subdued in comparison, but everyone makes an impression. And IS Johar duly delivers the prerequisite stereotypical comedy foreigner (“A cobra? Oh cripes! Never have I seen such a reptile in a first-class cabin. Never!”)

With Anthony Powell’s Oscar-winning costumes boasting the 1930s, it would be easy to forget this was a ‘70s production, but for the tell-tale bright red blood – possessing a closer consistency to paint than the real thing – splattered across limbs and leaking from head wounds. It adds a splash of the lurid to an otherwise Bank Holiday afternoon staple. Of course, we’ve got a new Death on the Nile to look forward to, as Kenneth Branagh’s disappointing and massively moustachioed Poirot scores a follow-up jaunt. I suspect his version stands even less chance of eclipsing Ustinov’s than his Murder on the Orient Express did Finney’s. 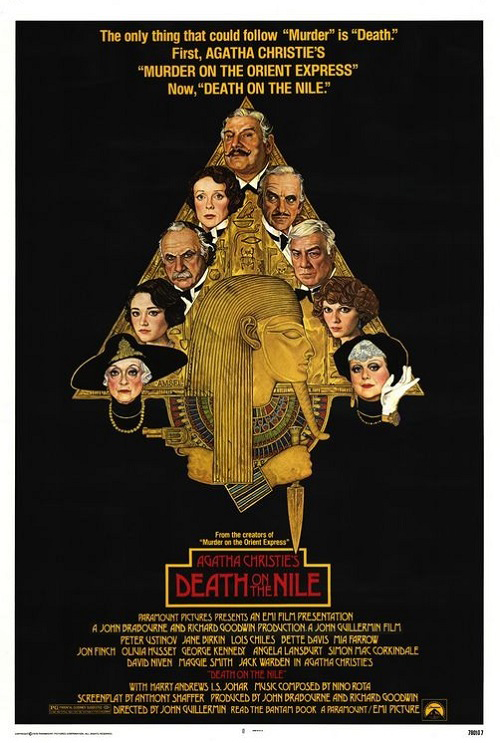 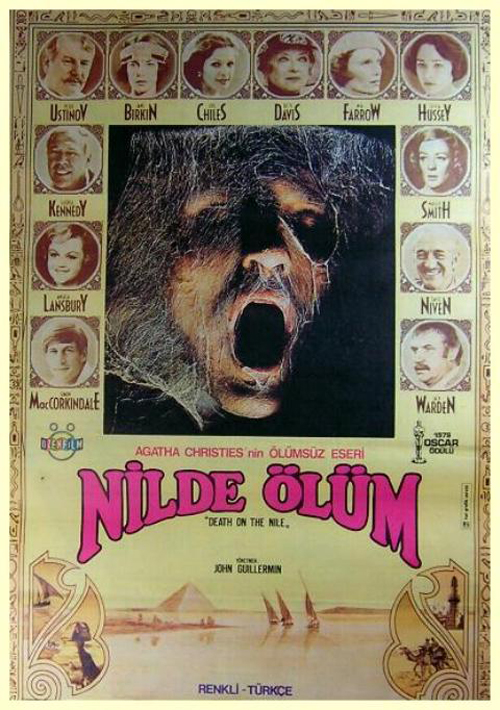