I have brought you here to charge you with the following crimes. 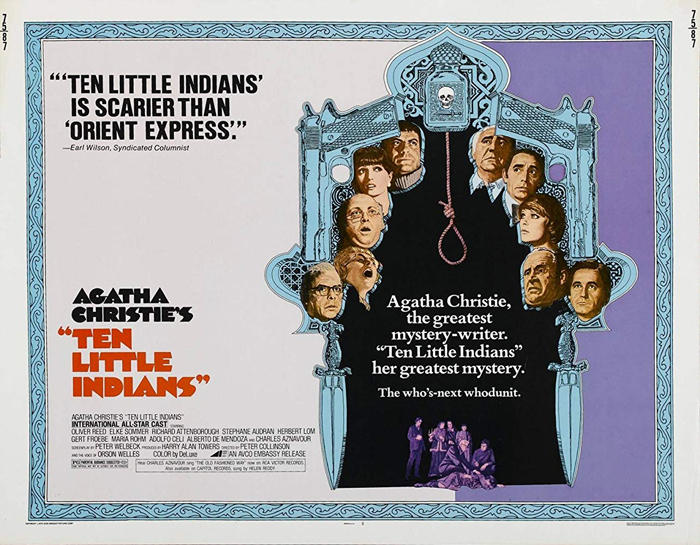 Ten Little Indians
aka
And Then There Were None
(1974)

(SPOILERS) In respect of the novel, the latter title, And Then There Were None, didn’t become the UK standard until the mid-1980s, having been taken off the bat by the US in preference to the original UK title, Ten Little N*****s; Ten Little Indians was used for the US paperback, making it curious that a title changed due to its racist language was replaced by one also likely to cause offence (the novel’s original title was also used for the film in some territories, per some of posters viewable on IMDB). It’s both Agatha Christie’s best-selling novel and the best-selling crime novel of all time (and the sixth best-selling novel of all time). Impressive credentials, and Ten Little Indians has duly been adapted many times and with various degrees of fidelity (commonly bearing the more upbeat ending of the stage play version). This is the film version I’m most familiar with, and commonly the most derided, it seems. Perhaps because I came to it first, though, I do actually regard it quite fondly.

That’s despite the various plot holes flaunting themselves quite brazenly. You might have reasonably thought they’d be ironed out, what with this being producer Harry Alan Towers and screenwriter Enrique Lovet’s second bash at the property. Such inconsistencies as the guests readily accepting the invite in the first place, to such a remote location. Then there are events and fates that seem randomly effective at best (wandering into the desert to die).

Mostly, though, it’s the location that has always stuck with me, and it still does an enormous amount of heavy lifting in making the picture stand out. The desert exteriors were variously shot in Iran and Spain, while hotel is found in the former country. It’s striking in cavernously empty form: vast, atmospheric and opulent.

Peter Collinson may not have ever really capitalised on the early promise of the supremely well-oiled The Italian Job, but this remains probably the highest profile of his subsequent projects, many of which were outright duffers. If he can’t extract uniformly great performances from the Europudding cast, he nevertheless ensures the picture looks very polished. Add to that a memorable score from Bruno Nicolai, and there’s something irresistibly 1974 – fashions included – about the whole concoction. On the whole.

Charles Aznavorre is entirely resistible as a drunk Frenchman with a contractually obligated – I presume – song included. Ex-Bond villains Adolfo Celi and Gert Fröbe (the latter not allowed his best face, a humorous one) are merely serviceable. The same is true of Stephane Audran and Elke Sommer. But Oliver Reed, Richard Attenborough – replacing James Mason as he embarked on a long quest to secure funding for Gandhi – and Herbert Lom are all highly watchable, the latter two in particular providing an easy rapport. Plus, there’s the treat of Orson Welles’ indelible tones portentously setting the scene via a tape recording (Towers and Welles being associates from way back, and Welles having appeared in Towers’ production of Treasure Island a couple of years earlier).

There’s apparently a longer cut showing the guests arriving by plane, and a subplot featuring spies searching for the ten little Indians centrepiece that is progressively broken up as the guests are knocked off. I can see how that would be cut, as it sounds entirely extraneous. Few would claim Ten Little Indians is a classic, but by the same token, it’s difficult to see quite where the opprobrium comes from; as Christie adaptations go, it’s both memorable and effortlessly watchable.