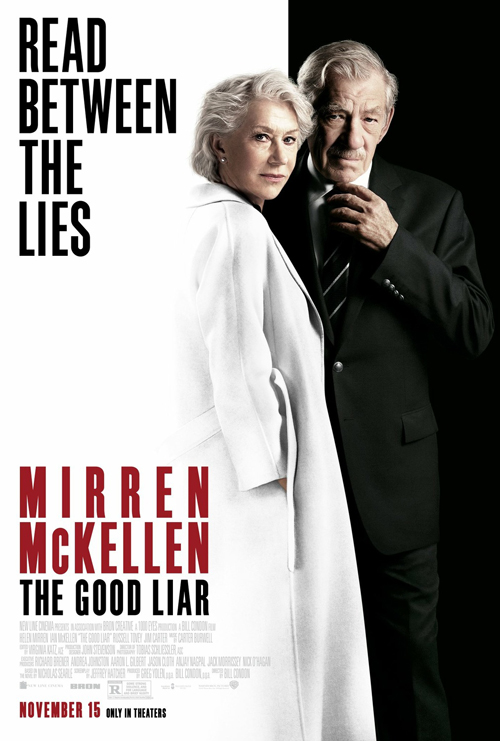 (SPOILERS) I probably ought to have twigged, based on the specific setting of The Good Liar that World War II would be involved – ten years ago, rather than the present day, so making the involvement of Ian McKellen and Helen Mirren just about believable – but I really wish it hadn’t been. Jeffrey Hatcher’s screenplay, adapting Nicholas Searle’s 2016 novel, offers a nifty little conning-the-conman tale that would work much, much better without the ungainly backstory and motivation that impose themselves about halfway through and then get paid off with equal lack of finesse.

It’s evident very early on that Mirren’s Betty McLeish is pulling a number on McKellen’s Roy Courtnay, whom we have already been shown scamming a couple of businessmen. He is simultaneously attempting to fleece lonely widow Betty of her savings, meeting up through a lonely-hearts website and inveigling himself upon her such that she invites him to move in: next stop, a joint account, despite the protestations of her grandson Steven (Russell Tovey). So far, so undemandingly agreeable, in a sub-Mamet, sub-House of Games way. McKellen and Mirren are consummately watchable, and if there’s nothing especially choice about the plot dynamics, Hatcher grants McKellen the occasional grandiloquent turn of phrase. Director Bill Condon does a good, steady job, having previously teamed with McKellen and Hatcher to pleasing, autumnal effect in Mr Holmes, and makes it clear that Roy is a ruthless bastard beneath the charm, most transparently during a subway confrontation with a con victim, duly stabbed and pushed in front of an oncoming train.

But then the action moves to Berlin, and Roy’s dodgy past demands attention out of nowhere as Steven confronts him. Roy admits he was the German translator for the real Roy Courtnay, assuming his identity in 1948 after he was killed. Initially, this twist serves to wrongfoot the viewer – let’s face it, every viewer – who has concluded Betty is playing her own game, because how can exposing him serve her end game? And it seems, ultimately, that it doesn’t, since Steven later apologises for what is presumably this outburst… Which means the episode makes no sense, that Steven (not her actual grandson, but the boyfriend of her grandson), having planned everything out with Betty, should nearly fumble it so spectacularly (one might also ask why Betty even needs to drag Roy to Berlin, and as for her visit, wouldn’t it have made more sense to go searching for her locket before setting the wheels of her plan in motion?)

It’s evident structurally why this excursion is there, as suddenly unspooling Betty’s story in a rush of exposition at the end, hitherto unannounced, wouldn’t fly. But truth be told, it doesn’t fly this way either, and comes across as no less awkward and unprompted. Shoehorned in as it is, Betty/Lili having been raped by Roy/Hans as a teenager, with consequent events triggered by Roy leading to the loss of her entire family, somehow serves to undermine her character rather than bolster it. Betty becomes just another revenge-seeking victim, having nursed her grievances for sixty years (despite saying she forgives him). How much more effective if she and Roy were simply mirrors of each other? She another con artist, but better and craftier. You could easily take out the backstory and end up with a more satisfying, less cumbersome tale.

Perhaps Searle didn’t think that was weighty enough. Perhaps, on the page, the historic dynamic between them plays out better. Condon and Hatcher would have been wise to hone the relationship down to bare essentials, though. As it is, The Good Liar is handsomely made and impeccably performed, but ends up unnecessarily over-contrived.