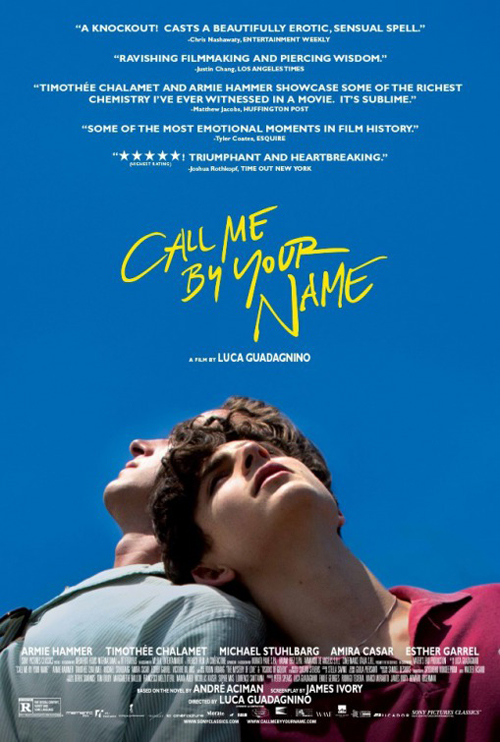 (SPOILERS) Critically lauded but curiously unaffecting endeavour on the parts of director Luca Guadagnino and screenwriter James Ivory. Call Me by Your Name, an '80s Italy-set summer romance was surely intended to captivate through making us privy to the passions between Timothee Chalamet’s seventeen-year-old Elio and Armie Hammer’s 24-year-old Oliver, a grad student working with Elio’s father (Michael Stuhlbarg). But the relationship is singularly devoid of chemistry and intensity, leaving actors going through the motions of infatuation.

More than that, however, and it appears to be something of a prejudicial minefield to debate the matter, there’s a skew to the age gap between the lovers that never feels satisfyingly bridged. I’m not pointing towards any suggestion of a predatory angle within the material, although that’s something one can’t help but be conscious of. Rather, whatever merits André Aciman’s 2007 novel may boast, as translated to screen they’re hindered not only by the rather mechanical interactions between the pair, but also by Hammer looking thirty-plus, and Chalamet a very tender, boyish seventeen or younger still.

If you’re not sold on the connection between the two, the whole film crumbles. Chalamet’s a talented actor, but I haven’t found him sympathetic yet in a performance (so maybe his talent has limits), and I don’t really believe Elio’s obsessed with Oliver. More than that, I can’t remotely see why Oliver’s obsessed with Elio. It’s as much of a non sequitur as his dancing. Hammer convincingly portrays the confident, self-assured figure of the early sections of the film, but he’s much less effective trying to telegraph his devotion to the younger object of Oliver’s affection.

Their burgeoning and initially tentative romance is set against the backdrop of Elio’s parents actively encouraging Oliver’s furtive groping, but this too seems a bit too easy-liberal (again, this comes down to the maturity Hammer brings and immaturity Chalamet suggests, the knock-on being a fundamental sense of inequality to their relationship). Stuhlbarg offers a sensitive speech at the end, expressing how he wishes he had taken the same opportunities his son has, and not withstanding whether he should be quite so vicariously keen on his son’s dalliances, it’s one of the very few spots in the picture that actually carries emotional resonance.

There’s also the considerable beef that Call Me by Your Name is a long, long, long picture, one that seems content to stir and repeat. Not unlike Suspiria in that respect, but with fewer grisly entrails. You feel you’ve experienced an endless summer of monotony with this family. One of multitudinous suffocating bike rides and dips. And dissatisfied would-be girlfriends building their hopes up to no avail. And Hammer dancing horrendously. On the plus side, some of the location work is quite idyllic, and there’s a decent tune or two from Sufjan Stevens.