There’s a wolf in the henhouse. We let him in! 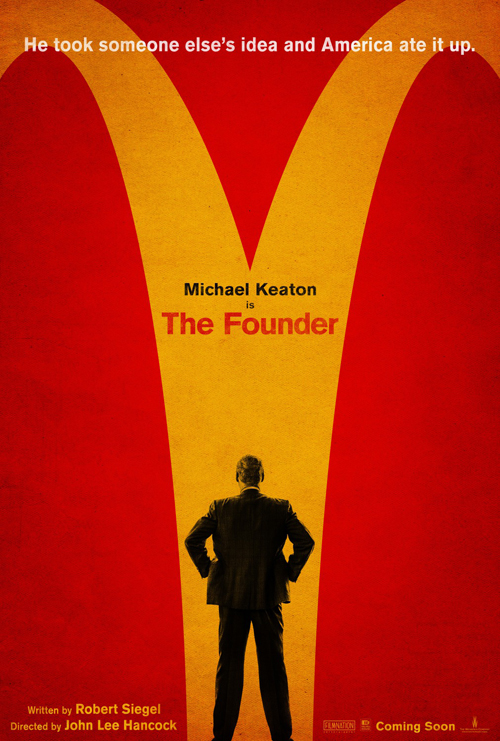 (SPOILERS) I’d had this on my watchlist for an age, balancing the positive of a Michael Keaton showcase against the vanilla prospects of a John Lee Hancock joint. I should have been less cautious, as The Founder, the tale of the rise of Ray Kroc and his wresting control of McDonalds from the brothers who started it, is hugely engrossing. It may even be that Hancock’s inconspicuous directorial presence benefits the material on this occasion, allowing Robert Siegel’s screenplay and Keaton’s performance to be exactly as persuasive as they should.

There’s surprising nuance to this depiction of the American Dream in all its undersided glory. Ray achieves everything it stands for, but does so by stomping on the little people who put principles over profit (he says as much at one point, that this is why they’re only running one restaurant). The dexterity of the material is not dissimilar to The Wolf of Wall Street in its own, less showy way, bringing you along for the ride of Kroc’s eventual success and perversely encouraging you to root for him, while at the same time recognising that he opts for a ruthless, take-no-prisoners course.

On the one hand, the brothers, superbly played by Nick Offerman and John Carroll Lynch, are less than sympathetic in their rigidity and choices, ones that effectively leave Kroc financially paralysed. On the not inconsiderable other, when he eventually pushes them out of their own business and takes their name away, he has the audacity to propose a handshake deal for their one percent in perpetuity profit share (incredibly, they agree, and unsurprisingly, he never pays up). The slippery manner in which Kroc succeeds in ousting the brothers’ control, at the suggestion of financial consultant Harry Sonneborn (BJ Novak), is cleverly inserted at a point where Ray’s in a make-or-break situation, so putting our sympathies with the monster rather than those stomped on (“You’re not in the burger business. You’re in the real estate business”, he is told, so establishing the Franchise Realty Corporation, to the brothers’ impotent indignation).

Keaton is a blast as Kroc; it’s a juicy role played to the hilt by a great actor, and a reminder of how few such roles there seem to be these days. All you have to do is let him go, and he does everything you’d expect. Keaton’s so energetic, it scarcely matters that he’s a decade too old for the guy.

As for the director, to be fair to Hancock, he’s entirely able to capture Kroc’s sense of wonder at the brother’s unprecedented “instant” service approach. There’s a whole sequence where the brothers recount their rocky path to success to a rapt Ray, and you’re as rapt as he is. The path to ensuring a “quality” product in a mass franchise is fascinating too, perhaps the one aspect (aside from the fast-service) where Ray upholds the brothers’ ideals. Notable too, if somewhat apocryphal sounding, is his claim that the key in his acquisition, above all else, is the name (“It sounds like America”).

You could argue the movie’s is too impressed with Kroc, giving the brothers short shrift and not showing much sympathy for Laura Dern as his slightly shrewish first wife (the only thing he won’t budge on in their divorce settlement is refusing her McDonald’s stock), but I think that actually serves the illustration of a figure who makes such a monumental success of themselves, by whatever methods. If you come away on Ray’s side – which I doubt you will, but it’s there – it isn’t because the picture has left out the negatives, it’s because his sweeping charisma has worked an effect. I’m generally unimpressed by the linear nature of biopics and their workmanlike approach, and you could accuse Hancock of exactly this, but with The Founder, he has two key ingredients on his side: the appeal of a classic success story, regardless of the morality of the protagonist, and Keaton, who didn’t gain Birdman level attention here, but definitely deserved it.