Well, he hasn’t actually written a word of it yet. But he says, it’s the non-fiction book of the decade. 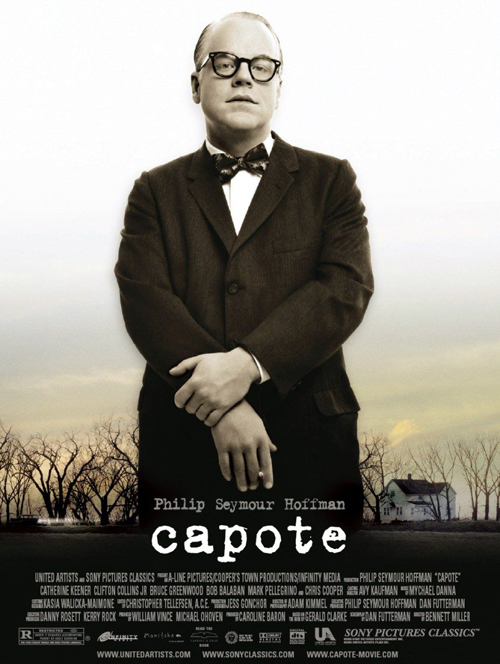 (SPOILERS) Another (relatively) recent Best Picture Oscar nominee I missed first time round, and then subsequently didn’t really feel very compelled to chase up. Perhaps it was the vying Truman Capote pics (I’ve also yet to see Infamous) putting me off, or possibly just being underwhelmed by everything Oscar that year (which hasn’t changed). I can certainly see why the late Philip Seymour Hoffman received the Best Actor award for Capote, though, since the eccentrically mannered title character is precisely the kind of studied, showy performance the Academy laps up.

Hoffman duly holds the attention, as does Catherine Keener, contrastingly underplaying as Nelle Harper Lee. “And how’d you like the movie, Truman?” she asks at a screening of To Kill A Mockingbird, after the perma-self-absorbed Capote, sat drinking alone at the bar, has finished a self-indulgent outpouring about how Death Row inmates’ appeals are all about him: “It’s torture. They’re torturing me”.

But Capote’s actual content, focusing on Truman’s cold-blooded manipulation (and then shunning) of murderers Smith and Hickock in pursuit his story and resultant book, rather than the acts and aftermath themselves, feels as distracted as its title character. Perhaps that’s by necessity, and it would be pointless to retread the ground of In Cold Blood – already made into an acclaimed documentary-style feature by Richard Brooks a year after the novel was published – but I expected to find Capote, the natural raconteur, transfixing, rather than mildly diverting.

That may be part and parcel of director Bennett Miller’s low-key approach, which can work superbly (Moneyball) or leave results feeling somehow lacking (Foxcatcher, like Capote written by actor friend Dan Futterman). The proceedings are chock full of examples of Truman twisting events to his advantage or outright lying when it suits him (or unconvincingly telling himself lies). But in his close relationship with Clifton Collins Jr’s Perry Smith (who eventually admitted to the killings), there is initially an effective blurring of lines between his professed empathy for and close connection with his subject; his partner Jack Dunphy, played by Bruce Greenwood, is convinced Capote is in love with him. Yet Truman’s inherently over-dramatising nature manufactures such circumstances around him, exemplified by his melodramatic protesting of Smith’s continuing attempts to contact him.

Later, Capote plies Smith with bare-faced lies, both minor (that the title for In Cold Blood didn’t come from him, and wasn’t even finalised) and major (“I did everything I could. I truly did” he protests, having done absolutely nothing to help their appeal). And so one concludes that his sociopathic tendencies, feeling nothing for anyone but for himself, evidence the strongest link with the man towards whom he professes empathy (as Capote analogises, he went out of the front of the house “they lived in” while Smith went out of the back, and their paths duly lead where they did).

Ultimately, I felt Miller was probably the wrong director for Capote; the greater achievement of telling this story would have been to make the viewer complicit with Capote’s actions, repelled by his behaviour yet willing him to succeed for all his base motives. The postscript simplistically implies Truman’s failure to complete another novel following In Cold Blood was a consequence of his behaviour in respect of the case, yet this Capote has been characterised by blithe bluntness (announcing to Chris Cooper’s detective he has no interest in who committed the crimes), self-glorification (permanently “factualising” the fiction of their own life story), procrastination and nascent alcoholism throughout.