A penguin. It doesn’t have to be alive. 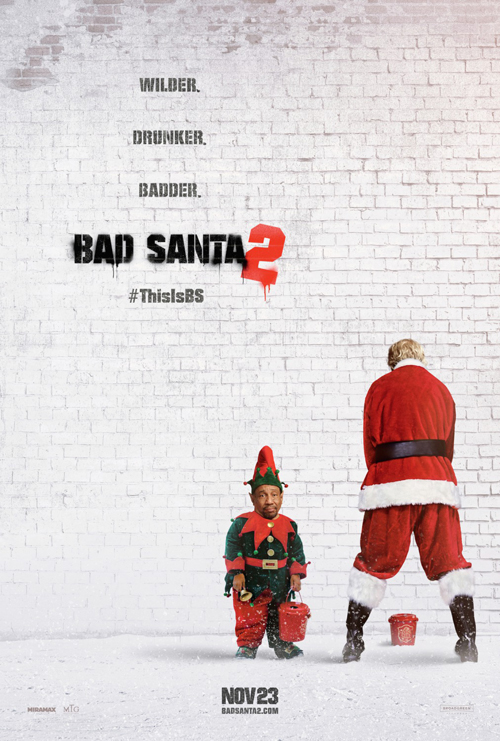 (SPOILERS) Unasked for and uninspired attempt to milk a franchise that didn’t need milking, the only surprise with Bad Santa 2 is that it occasionally does manage to raise a smile amid the rather tired attempts to replicate the first movie’s laughs, which entails looking everywhere for ways to shock and be transgressive. You’d be forgiven for thinking the movie was on the former Weinsten Company’s slate for dusting off properties with the vaguest potential, but no, the brothers weren’t involved this time. Which puts Billy Bob Thornton squarely in the frame for its eventual materialisation.

You can’t blame him for attachment to a plum role, only for the foolishness of thinking it could in any way be a worthy revisit (the same goes for John Turturro and his Jesus Quintana movie). Writers Johnny Rosenthal and Shauna Cross conspire to dredge up a reunion with Tony Cox and Brett Kelly to boot (even Octavia Spencer, for reasons best known to herself, has agreed to reprise prostitute Opal). Cox’s return as Marcus Skidmore makes sense, given there’s an inevitable robbery at the core of the plot, and he’s duly as coarse, crude and splenetic as before, albeit as with everything in Bad Santa 2 – naturally, there’s a repeat of the “What do you want for Christmas little boy/girl” sequence – there are steeply diminishing returns.

And bringing back Kelly as Thurman Merman is a major misstep; the choice to make him an identical adult version of the boy he was thirteen years earlier pushes the picture firmly into the realms of affected self-parody and serves to underline that Bad Santa 2 has nowhere to go but in a circular motion. Thus, we have Christina Hendricks replacing Lauren Graham as Willie’s love interest but never really convincing us that she’d be into Willie (who is now a sexual dynamo, rather than an incontinent shambles) – she’s a recovering alcoholic and the co-founder of the charity Willie plans to rob, but also a dirty girl who likes to fuck against dumpsters.

The big change comes with Kathy Bates, Willie’s Parkinson’s-suffering mother Sunny and mastermind of the robbery scheme, whom he punches when he first meets her – not the hilarious moment it might have been – and who joins in and then some with hurling swathes of abuse at him (calling him “shit stick” and suggesting he looks like “a fucking albino scarecrow” being the least of it). She had Willie at thirteen, the consequence of the one time his father “didn’t fuck me in the ass” (“Hell, I didn’t even know I’d gived birth until I tripped over him”). Bates attacks the stream of filth with gusto, and it’s inevitable that some of the lines raise a chuckle, but despite the attempts to out-gross itself, there’s a flatness here that comes from treating the material as a formula. It’s just another scatological filth fest. The Coen brothers purportedly suggested the reedited original had been turned into American Pie, but it’s this sequel that carries such arbitrary fingerprints. It does, after all, proudly flourish Cox with a nutsack dangled in his face over the end credits.

Director Mark Waters provides Bad Santa 2 with a typically anonymous signature. He has definitely seen better days, mainly working with Lindsay Lohan, so a very long time ago, and was most recently made failed Young Adult fare Vampire Academy. This is only a marginal step up, and he surely knew it was a poisoned chalice; I might have suggested his brother Daniel would have been a better choice to handle Bad Santa 2, but he provided the screenplay for Vampire Academy, a long way from his glory days of Heathers. Bad Santa, in its own perverse way – perhaps less so in the Zwigoff cut – was appreciably infused with the Christmas spirit. This sequel, while replete with iconography – seas of Santas, shagging in a Christmas tree lot – and more overt in its sentimental streak, is much less so. It might even lead one to believe the season was calculated, manufactured and unnecessary.