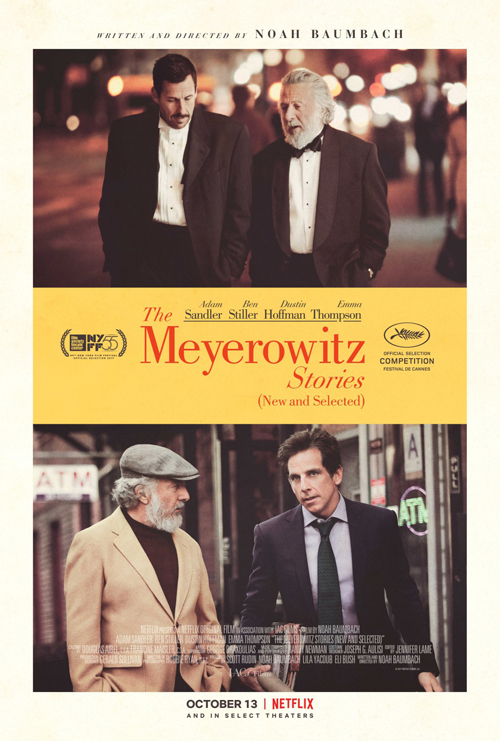 The Meyerowitz Stories (New and Selected)
(2017)

(SPOILERS) I find there’s a take-it-or-leave-it with Noah Baumbach’s films, such that this has been sitting on Netflix for two years without my feeling much urgency to visit it; only the arrival of Marriage Story and the attention it’s been receiving finally nudged me. The berth I gave turns out to have been warranted, since it’s a mainly tiresome, laboured piece of work, The Meyerowitz Stories (New and Selected)’s structure seemingly arrived at by whatever bright idea came into Baumbach’s head at that moment regarding the titular family.

As usual, the writer-director slips into a sub-Woody Allen groove, just without the appealing characterisation or plotting that marked the best of the latter’s New York period. It’s also identified by the most exasperating of ouroboros fascinations, of artists producing art about producing art, such is their own irresistible inclination towards naval gazing. Baumbach borrows structurally – loosely – from Hannah and her Sisters, compete with title cards for the individual shifts in sibling stories, but his concoction has none of the freshness and contrasts of that picture. There’s also a touch of buddy Wes Anderson’s The Royal Tenenbaums, but devoid of that films’ colourful pop-soulfulness.

The Meyerowitzs are an unappealing bunch, aside from monotone, buttoned-down sister Jean (Elizabeth Marvel, of House of Cards), who only merits the briefest of “chapters”. Dustin Hoffman’s Harold is a self-involved, inattentive patriarch who never really made it as a sculptor, despite peer respect, but infested his children with the importance of his work to their consequent neglect and denigration. Hoffman’s fine, but Harold is a collection of clichés on elderly aloofness and at once obsessing over and ignoring their offspring.

Adam Sandler only fares better to a degree as Danny, perpetually unemployed, struggling with a hip problem and leaving largely untapped a musical talent his father ignores (instead focussing on his uncreative younger son). Sandler has already proved himself a solid straight actor, of course, and early on, you think he might be able to overcome Baumbach’s affectations of character and introspection. Unfortunately, he’s inevitably dragged down. On top of which, he’s given a rage that has already been an established feature of the actor’s comedic work, so the final performance isn’t really such a revelation. Stiller’s doing the usually pained Stiller awkwardness medley as Matt, the financial advisor his father dotes in conversation just as he ignores the other two.

Also featured are Grace Van Patten as Danny’s daughter, a film student whose work mainly consists of stripping off and embodying Baumbach’s “satirical” (lazy) take on student political statements (Pagina Man). Emma Thompson plays Harold’s current wife, but is so hammy she may have been under the illusion she was in another Harry Potter. Rebecca Miller and Judd Hirsch both make positive impressions, probably because Baumbach doesn’t spend enough time with them to deflate their characters.

While the various chapters provide loosely contrasting perspectives, they nevertheless form a linear narrative, one in which the discontented siblings’ grievances are voiced, feeding a misanthropic melange that is very much in keeping with the director’s oeuvre (particularly so without Greta Gerwig’s tempering voice). There’s little excitement to be gained from the various pairings of performers, because Baumbach’s obsessions and characterisations all occupy a similarly disenchanted emotional sphere. Harold becomes ill, mortality looms, Danny and Matt engage in fisticuffs at an exhibition of their father’s work, and there’s an excruciating tearful breakdown by Matt. None of it is especially touching, or funny. And it all seems overwhelmingly familiar. The detour into the more consistently serious-minded Marriage Story may have come at the right moment, because the rambling idiosyncrasy of The Meyerowitz Stories finds Baumbach cross over from inessential to tedious.