I have a cow in the backyard. 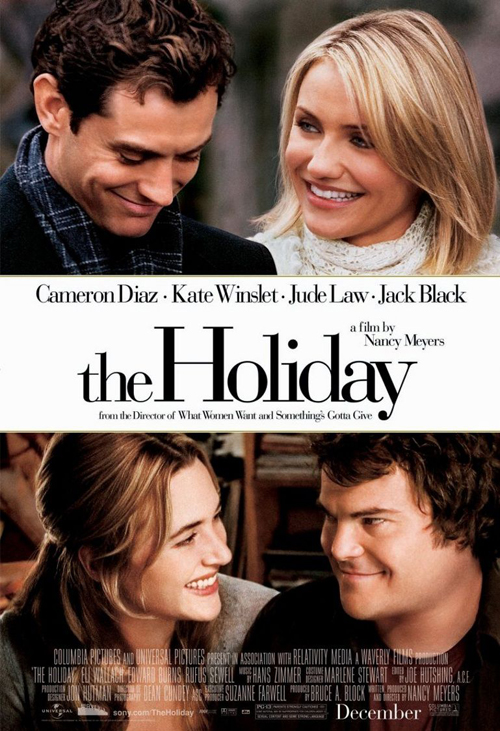 (SPOILERS) The Holiday is a half-decent festive romcom. Which is to say, one of the two romantic plotlines are decent, and the other is a mostly turgid bust. Nancy Meyers’ typically anonymous – think sub-Nora Ephron – lighter-than-lighter confection is entirely reliant on its cast for effectiveness, and as such, she gets things half right.

That half is Cameron Diaz’ movie-trailer maker (there’s a raft of entirely anodyne industry commentary in The Holiday, even to the extent of James Franco and Lindsay Lohan appearing in a witless trailer for fake move Deception). Diaz takes her leave of tiny-eyed philanderer Edward Burns (seriously, there’s a reason Burns never had legs as a leading man, and that’s his tiny tiny eyes) and swaps homes for Christmas with Kate Winslet’s Daily Telegraph – yikes – columnist. Ensconced in a picture-postcard Surrey cottage, she soon happens upon Jude Law’s affable widower and father of two.

The plotline works because Diaz – sadly missed from the big screen, having announced her retirement last year –is a great physical comedienne. She has the kind of natural comic timing you just can’t learn and thus can lift any scene and duly does so, making the Hollywood-ised clichés of rural England likeable rather than irksome. Paired with Law, who tends to sink or swim depending on his casting and rapport with his fellows (he made a good Watson to Downey Jr’s Holmes), she lifts his game and chills him out. If the issues standing in true love’s way – a long-distance relationship, Law’s initial reticence about revealing his family to her – are trifles, they’re carried enjoyable by the duo, and Diaz in particular.

In contrast, Winslet proves decisively that lighter roles are not her forte. She thrives on trauma and angst, and trying to sink into something effortless betrays her as painfully forced (likely she realised this, as you won’t find any romcoms on her CV subsequently). Whether its miming to air guitar – see Diaz dancing to The Killers for a conclusive contrast – or trying to suggest she finds Jack Black’s musical mugging amusing, she’s high and dry.

Her plotline is rather desperate too, finding Eli Wallach’s aging screenwriter absolutely fascinating (she’s the only one) and gingerly entering into a chemistry-free romance with Black’s composer (for movies, natch). Both Black and Winslet have exes to contend with, Black rather unbelievably dating Shannyn Sossamon and then more believably having her cheat on him, and Kate being messed about by roguish Rufus Sewell. So on that score, however you look at it, all Black’s Christmases have come at once. Ostensibly, he’s in a more subdued, charming role, but he can’t resist dialling it up to full Jack Black eleven at various points.

Essentially, if Meyers had cut The Holiday down into one story and so lost the dead weight (at 135 minutes, it tests the patience), it would have been more appealing. That said, the final scene finds all four leads getting together for New Year’s Eve, and you could quite believe a romcom with Black and Diaz would also have succeeded. Just don’t let Winslet near one ever again.