Is it filled with a pox? 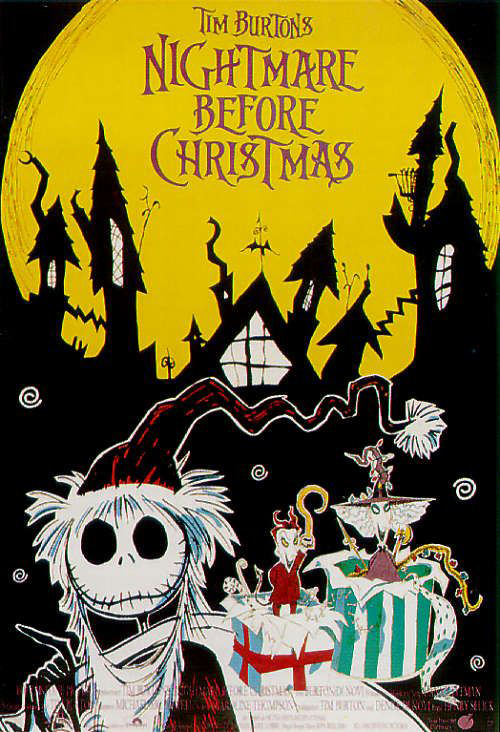 The Nightmare Before Christmas
(1994)

(SPOILERS) The Nightmare Before Christmas is one of the steadily dwindling number of Tim Burton films – yes, I know it’s really directed by Henry Selick, but it’s Burton’s story and sensibility, and he’s always taken all the credit, probably quite rudely – that are upheld as unalloyed classics. And yet, I’ve never felt all that partial to it. Like Edward Scissorhands, also scripted by Caroline Thompson, it’s a tonally one-note affair: fine as far as it goes, but it doesn’t actually go that far.

Pauline Kael complained of Edward Scissorhands that “Beetlejuice would have spit in this movie’s eye” and there are visuals in The Nightmare Before Christmas that come straight from Burton’s mock-hellish afterlife there. But the grotesquery is curiously static, bolted down by the stop motion rather than unleashed as per Aardman fare, the results as formal as Danny Elfman’s over-enunciated and under-lyrical tunes.

The conceit, wisely for an animated movie, is in miniature, so that, on getting a whiff of Christmas Town, Jack Skellington (Chris Sarandon) the Pumpkin King of Halloween Town, only manages to go so far in serving himself up as a faux-Santa. Tragically, in his blithe twistedness, he can’t distinguish nice gifts from nasty ones. Because, to him, they’re the opposite way round (it may be Brad Pitt’s nightmare, but Burton’s yuletide fantasy is to get a severed head in a box).

Jack isn’t so much a Grinch as a misguided goth, who only needs to come to terms with his patchouli-stained status in life and not strive for something beyond his abilities. At least, that’s one reading. The positive is that Jack doesn’t nurse sour grapes about his failure and quickly makes amends, while rekindling his sense of purpose in life – scaring kids – and finding love with a typically scarred, patchwork Burton heroine (Catherine O’Hara’s Sally).

Jack’s townsfolk still live in a miserably grey, overcast, funereal realm, even with the sprinkling of snow Santa brings, but they like it that way, just as Burton does in his black-draped, sepulchral home. I’m not sure they’re missing out that much, however. It isn’t as if Christmas Town isn’t still slightly sinister, along with Santa himself. This is Burton’s vision, so no one looks wholly wholesome. Mostly, I have a feeling that Burton in full animated mode is an unnecessary doubling down, and so becomes too much (also Corpse Bride and Frankenweenie). In contrast, the best in this stop-motion style, Selick’s Coraline, has the luxury of a textured Neill Gaiman story as its basis.

Burton pushes through all manner of dark Disney nasties here, which is obviously to his credit, from the varied sadism of Doctor Finklestein (William Hickey), who has created Sally as his vassal, to the tortures of Oogie Boogie (Ken Page). The design work impresses, of course, and there are witticisms and asides throughout. The mistaken capture of the Easter Bunny and the funereal dirge version of Jingle Bells particularly amuse. But there’s no real charm, no facets to the characters or verve to the execution. Generally, I admire the craft of The Nightmare Before Christmas much more than the content.