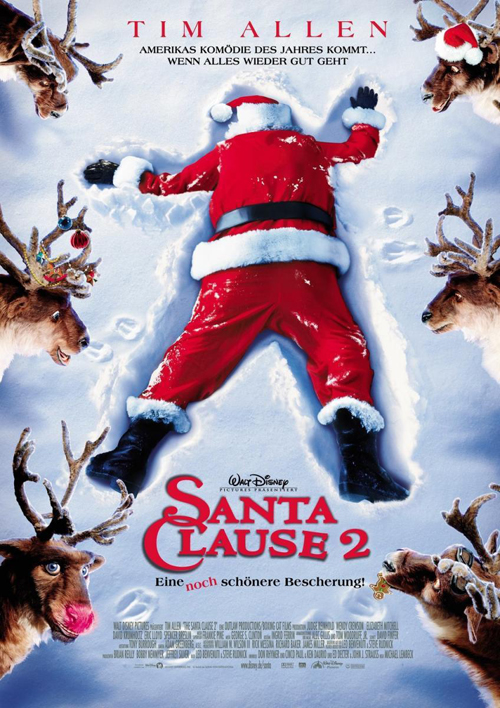 (SPOILERS) A definite surprise in this foray into Christmas movies – admittedly, most of them are revisits – is that Tim Allen’s Santa Clauses are actually okay (well, I can’t speak to the third one yet). The general aesthetic isn’t pretty – Allen in a fat suit and a nauseating North Pole that would have any legitimate Kris Kringle pulling his snow-white hair out in despair – but Allen’s intrinsic lack of cosiness ensures the sentimentality on display can only soil the proceedings so much. The Santa Clause 2 might even be more palatable than its predecessor.

Much of that is down to the romantic subplot, whereby Allen’s Scott Alvin, having had the Mrs Clause invoked, must find a wife before Christmas Eve or he loses his Santa-ship for the duration. It’s a convenient excuse for Allen to eschew submerging himself under layers of uncomfortable prosthetics as he gradually reverts to normal-sized Scott. The object of his affections turns out to be his son’s school principal, the rather wonderful Elizabeth Mitchell (of Lost, V and more recently The Expanse). By rights, she should have refused to speak to Scott again after he rather rudely commandeered a meeting to discuss son Charlie’s (a returning Eric Lloyd) behaviour, but I think we’re supposed to appreciate the scene because it’s Tim being anti-authoritarian.

That she doesn’t means the movie drops down a register, going for gentle romantic comedy and succeeding for the most part, making for a nice contrast to the hyperactive Christmas-ness elsewhere. Things go very well between them, thanks in part to Scott livening up a comatose staff Christmas party by bringing out all the presents from childhood they most loved/didn’t get. Things only turn sour when she refuses to believe he’s Santa, but help is at hand.

The subplot involving Charlie isn’t up to much (he’s graffitiing as an act-out of not being able to tell anyone what his father really does), but there’s an occasional laugh to be had from Scott’s Santa “clone” Toy Santa, installed while Scott attends to business, turning the North Pole into a military dictatorship (“It’s Christmas Eve. I have coal to deliver”). The Council of Legendary Figures has largely untapped potential (also untapped in the later, similarly themed Rise of the Guardians), but it’s nevertheless nice to see Peter Boyle as Father Time.

The “action” finale isn’t perfunctory, but The Santa Clause 2 generally furnishes enough gags that land to tide you through: “Have you ever helped anyone?” Scott asks his ex’s shrink husband Judge Reinhold, continuing a theme from the original; the unsettling prospect that “I see you when you’re sleeping, I know when you’re awake”; Toy Santa’s appropriation of Christmas songs – “Crashing through the snow, in a strip-mining machine”. Overall, this one elicits a pleasingly low humbug response.