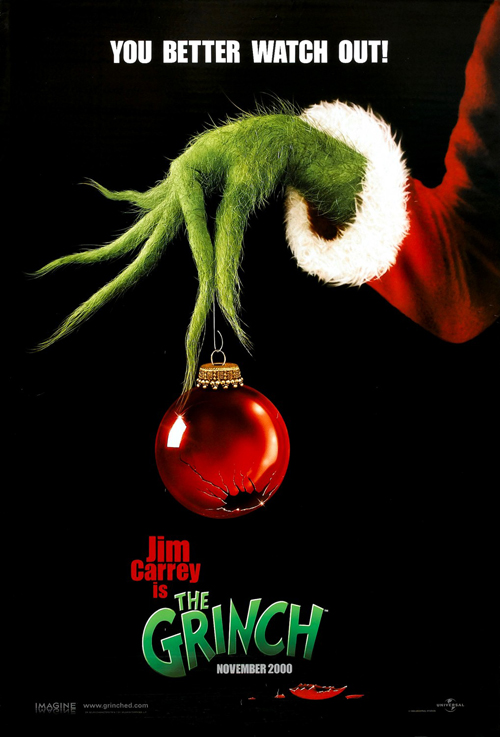 How the Grinch Stole Christmas
(2000)

(SPOILERS) Or How Little Ronnie Howard Committed a Celluloid Atrocity. Away from the inescapable horror of witnessing it on the big screen, How the Grinch Stole Christmas isn’t quite as relentlessly nightmarish, but it remains a hideous monstrosity of a production on almost every level, starting with the direction and then moving on to performances, costumes, music, prosthetics and art direction. The oddest thing about it is how it manages to be simultaneously grotesque and saccharine, but in neither regard with anything approaching flair or sincerity.

The blame surely rests with Howard, the most workmanlike of Hollywood name directors and lacking a truly imaginative bone in his body. Romantic fantasy – Splash, Cocoon – he can just about handle, but ask him to steer a course requiring a degree of creative acumen – this, Willow, the Dan Browns – and he falls flat on his face. His response to the demands of a live-action version of Dr Seuss’ most famous work, give or take a cat in a hat, is to create a queasy, plasticised Whoville, cramped and claustrophobic and decorated with Dutch angles, even speeding up sequences, while ensuring its residents resemble a cheese melt phantasmagoria. Except for “adorable” Cindy Lou (Taylor Momsen, now a rock chick), requiring a line about how she “hasn’t even grown into her nose yet” to enable her to remain a normal looking moppet.

Somehow, Seuss’ seventy-page picture book and the thirty-minute cartoon version have been engorged into a listless, enfeebled, dramatically sterile 105-minute movie, with swathes of dead-air filler regarding the Whoville inhabitants’ emphasis on the mercenary rather than the true meaning of Christmas, and little Cindy Lou appealing to their better natures. And the Grinch’s too, his having been retconned as an abandoned What (what?) who resents them the town’s inhabitants for his childhood mistreatment (Hollywood Backstory 101).

All of which is a bit rich coming from a movie expressly designed to make megabucks, not least through the merchandising, for both Universal and the keenly grasping Audrey Geisel and her agents. As the Grinch laments at one point, “The avarice never ends!” It’s okay, though, as Geisel was principled about content, and had script veto, even if quality itself was moot; her say-so didn’t prevent such elements as key parties slipping through and the Grinch landing in Christina Baranski’s cleavage.

Jim Carrey is as good casting as anyone as the Grinch, but the problem is that, as per the saggy, unfocussed film generally, he’s allowed a free hand to riff endlessly – probably the most he has in a movie outside of Ace Ventura – and the results are more frequently about frenetic gesticulating and mugging than eliciting genuine laughs. There’s a touch of WC Fields in there at times, and Carrey’s elasticity, accompanied by decent – but nevertheless emphasising that live-action wasn’t the way to go – effects from Rick Baker, serves the overall effect, but it’s all rather strained and exhausting.

Inevitably, there’s a synchronising at times of the Grinch’s disdain and the viewer’s distress, particularly when the Grinch is made to suffer a series of indignities when enthroned as “Holiday Cheermeister”, in the course of which he wins a sack race against Who tots to the Chariots of Fire theme. And when posing as Santa, and Cindy Lou asks plaintively, “Santa, what’s Christmas really about?” the Grinch responds instinctively “Vengeance!” before rephrasing.

With the title character’s redemption on the table, a worse villain needs to be established in the form of Jeffrey Tambor’s mayor; Tambor gets a few good lines, but the prosthetics, in tandem with the screenplay from Jeffrey Price and Peter S Seaman (more in Wild Wild West than on Who Framed Roger Rabbit form) kill most of his enthusiasm (various members of the Howard clan also make up Whoville numbers).

Anthony Hopkins provides a touch of clashing class as the narrator (a good year for him pocketing lucrative wads for very little effort, with this and Mission: Impossible II). Ironically, the best part of How the Grinch Stole Christmas by far doesn’t involve prosthetics or the sick-making set. Max the dog is an absolute star, be it holding a Christmas party while the Grinch is away or being forced to pull the sleigh of stolen presents up the Grinch’s mountain. Of course, Max would now be CGI (see Call of the Wild), and so the entire marvel of the performing pooch would be lost.

Has How the Grinch become a Christmas favourite? It’s a fixture of schedules, but then, so is Santa Clause: The Movie. With a TV version – which did become a favourite – and a recent Illumination CG take, its deserved status as an unbecoming desecration of a classic children’s text may yet cement itself. For now, it continues by default to garner more respect than the live-action The Cat in the Hat of a few years later. My recommendation for a decent movie Seuss: Horton Hears a Who.

That Freud stuff’s a bunch of hooey.

June 10, 2012
Spellbound (1945)
Spellbound is something of a stumbling follow-up to Rebecca, producer David O Selznick’s previous collaboration with Hitchcock. Selznick was a devotee of psychoanalysis, and the idea of basing a film on the subject was already in the mind of the director. To that end, the producer’s own therapist, May Romm, was brought in as a technical advisor (resulting in Hitchcock’s famous response when she pointed out an inaccuracy, “My dear, it’s only a movie”).

August 11, 2020
Star Wars The Saga Ranked
This is an update of my 2018 ranking, with the addition of highly-acclaimed The Rise of Skywalker along with revisits to the two preceding parts of the trilogy. If you want to be generous and call it that, since the term it makes it sound a whole lot more coherent than it plays.
Post a comment
Read more