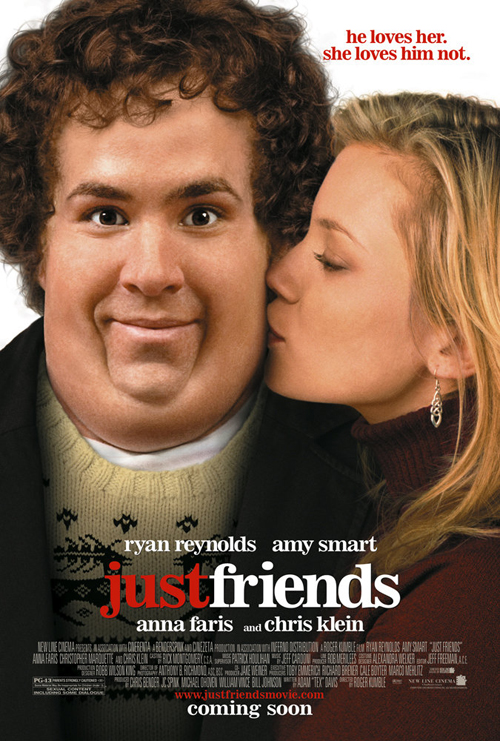 (SPOILERS) By virtue of setting – icy New Jersey – Just Friends features more bona fide Christmas trappings than many fellow Yuletide yarns. And yet, they simultaneously feel more incidental than the festive fare in many of those yarns. Essentially, this is a late-period There’s Something About Mary variant, in which the protagonist’s high school humiliations – in particular, romantically – are revisited a decade on, and he discovers, for slapstick’s sake, that he hasn’t outgrown that period nearly as much as he’d hoped.

Reynolds, still a decade shy of a true star-making turn, which perhaps not incidentally was one he’d have to wear a mask for, is reliably energetic in the Ben-Stiller-but-handsome role of Chris Brander. Chris is a former fatty, as we see in an extended prologue where he’s parading a prosthetic George Lucas neck chin. He’s smitten with bezzie friend Jamie – Amy Smart, whom I have to admit I drew a blank on, even with her having been in Justified – but since she’s pretty and shallow and into jocks who don’t treat her right and nothandsome guys buried in prosthetics, she’s not interested. Chris leaves town, swearing to show them, and the next time we see him he’s turned into Ryan Reynolds, a smooth-operating ladies’ man working for an LA record producer (Stephen Root, given a single scene in leather trousers, which represents criminal underuse). Tasked with shepherding bat-shit crazy pop artiste Samantha James (Anna Faris) to Paris, events conspire to leave them both stranded in Chris’s New Jersey hometown over the holiday period.

This might have been effectively lower-key, more observational and reflective, but Just Friends opts instead for broad-brush hijinks at every turn. Which is okay, and reasonably entertaining up to a point, but the recipe ends up tasting familiarly stodgy. Chris wants to pay Jamie back for ignoring him all those years by treating her like another conquest; inevitably, this flounders, and he’s soon reduced to the inept status of his teenage longings – “You’re back in the friend zone” – retainer included.

Eventually, following repeated indignities, foiled plans and frustrated freak outs on Chris’s part, true love finds a way. But taking this route means Jamie remains a love object rather than a character (much like Diaz in the more transparently flippant There’s Something About Mary). There’s no evidence that director Roger Kumble’s and screenwriter Adam “Tex” Davis intended to make this romcom actually romantic, and it misses out on most of the opportunities for interaction and compare-and-contrast of better return-home movies (Grosse Point Blank).

Just Friends does have a number of incidental pleasures to help it along, however. Christopher Marquette is awarded a particularly one-note hormonal teenager role as Chris’s brother, but he and Reynolds have an infectious rapport that ensures the juvenilia between them lands more often than it doesn’t. Julie Hagerty is, as ever, a gift as Chris’ slightly daffy mum. Chris Klein is surprisingly solid as another former nerd operating a similar predatory game to Chris and also pursuing Samantha. And there’s an effective, National Lampoon’s Christmas Vacation-style destruction of Jamie’s dad’s Christmas display, much to his ire.

Star of the show is easily Faris, though, who if there was any justice would be her generation’s Goldie Hawn (I understand she’s currently starring in a hugely successful sitcom, so that’s something, certainly better than being forced to endure numerous Scary Movies). She steals every scene she’s in, getting the chance to act spoiled, lunatic and obnoxiously entitled, coming up with inspired song lyrics – “Mall people they come and go, small people they just don’t know” – being tazered and then dosed up with Vicodin (“I’m gonna make bobble” she announces, blue slop leaking uncontrollably from her mouth). It’s even worth sitting through the end credits for her full rendition of Forgiveness.

Like most Reynolds fare then, this is agreeable but missable. His miming in his fat suit over the end credits is quite indicative in that regard; Reynolds might be best delivered in small doses, preferably cameos, as he can quickly become exhausting (albeit, when he’s in straight roles, particularly action fare, he tends to be strangely anonymous). As far as Christmas picks go too, Just Friends can safely be considered inessential.