Open holidays only? How many of those are there? 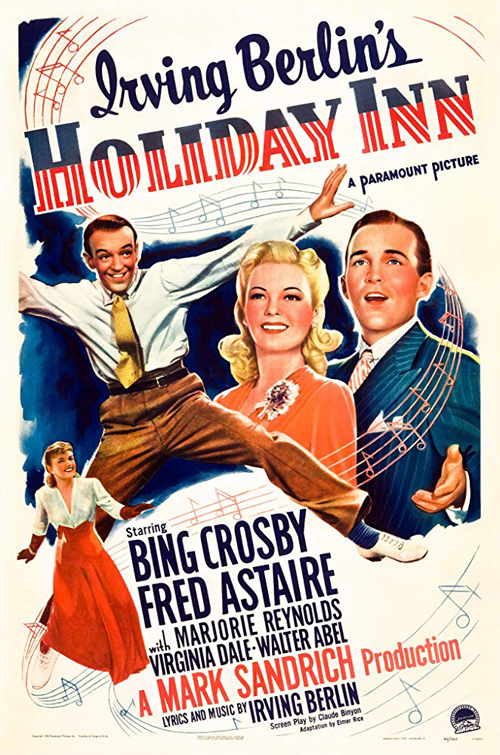 (SPOILERS) A slender premise that sustains itself surprisingly well, most obviously because, unlike the later White Christmas, which reuses Bing Crosby and the famous song first sung here and that more-dependable-than-the-real-stuff asbestos snow, there’s a degree of conflict ensuring Holiday Inn isn’t just a collection ineffectual interludes between Irving Berlin numbers.

Linda: I don’t know. It sounds like something you’d dream about at night and it would be wonderful. And then you’d wake up in the morning and realise it wouldn’t work.

Much of the effectiveness of Holiday Inn comes from Fred Astaire’s willingness to play such a louse; on those grounds, it would make sense that he turned down White Christmas, there being no such tension between the leads. When Crosby’s Jim Hardy announces his decision to retire to a Connecticut farm with Virginia Dale’s Lila Dixon, the third member of the act, Astaire’s Ted Hanover persuades her that he loves her and she should continue to perform with him “The two of us, dedicating our lives to making people happy with our feet”. The stinker. Crosby takes it on the chin and before long has turned the ailing farm into an inn, which, in appealingly indolent fashion, is open only on the holidays (“That gives me about 350 days a year to kick around in”).

Astaire, being voraciously predatory and a low-down dirty philanderer – he’s seriously shameless – then can’t resist stealing away the next woman to work with Crosby, Marjorie Reynold’s Linda Mason. Now admittedly, Bing, rather backed into a corner, is less than straight up with Astaire and Reynolds and attempts to put a spanner in the works, but you can’t really blame him for wanting to stomp on the little weasel. My sympathy’s all with Crosby when, on hearing Reynolds is to be whisked off to Hollywood and his holiday inn idea is to be appropriated – albeit not by a hotel chain, yet – responds sullenly “I can see now that I’m the only one who could be happy here”.

It all ends happily, naturally, thanks to Louise Beavers, his wise black housekeeper (most of Beavers’ roles were maids or housekeepers), who gives him an earful, but somehow, there’s absolutely no justice for dirty Fred. Indeed, he gets hitched to Dale and doubtless subsequently embarks on numerous extramarital affairs. It’s especially notable that no other side to Astaire; he’s entirely, shamelessly, scheming and duplicitous. There’s nothing to lend him a more likeable veneer.

Well, aside from his dance numbers; his tap solo punctuated by firecrackers is probably the best musical sequence in the picture; his drunk dance is pretty good too. The least auspicious is the especially tailored – post Pearl Harbour, which happened during the production – war effort promo with Bing singing Song of Freedom in a daft hat. Talking of which, you’ve got to hand it to Berlin for a lyric like “I could write a sonnet, about your Easter bonnet”.

The version I saw had its blackface number Abraham edited out, Channel 4 presumably being over sensitive to criticism after Theresa May announced it as her favourite Christmas film (much as I’m disinclined to throw the weight of my support behind the ex-PM, the way The Independent reported her admission, you’d think it's her favourite Christmas film because of the blackface. Which I’m sure isn’t the case).

Bing and Fred aren’t quite Bing and Bob (Hope), although it would have been nice to see Crosby one-upping Astaire the way he frequently did Hope in the Road movies. Holiday Inn's funniest scene, however doesn’t feature either lead. Having been delayed in her drive to the inn by hired hand Gus (Irving Bacon), who stops his car in the creek, leading to her getting very wet, Reynolds is given a lift by Dale. Learning why the latter is there – Crosby has connived to bring her together as Astaire’s partner again – Reynolds offers to drive, as she knows a shortcut to the inn. Instead she stops in the creek again, so leaving Dale stranded. Very crafty.