So let me get this straight, Santa. You mean, when I grow up, if I want to be Santa Claus, all I gotta do is push you off a roof? 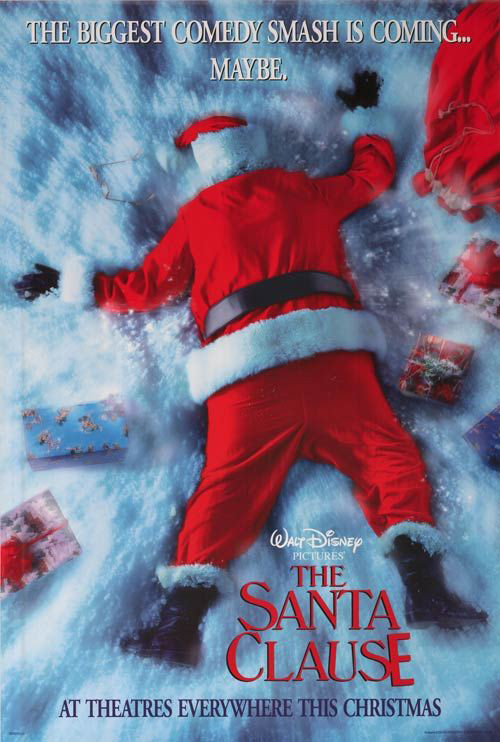 (SPOILERS) Tim Allen’s status as a big screen star really starts and ends with The Santa Clause, in which he’s frequently buried under prosthetics. After all, you can only hear him as Buzz Lightyear and the rest of his hits are fairly random (Wild Hogs), with only one bona fide, much loved critical darling among them (Galaxy Quest). Maybe that’s because, much like say Jerry Seinfeld (albeit not so much politically), he always comes across as a TV guy. Which isn’t necessarily such a bad thing, as it’s only his deadpan Home Improvement persona that keeps this movie’s more sickly-sweet, cotton candy impulses in check.

Purportedly, Disney made an exception to a no-criminal-convictions rule among employees for ex-drug dealer Allen, which doesn’t prevent his Scott Calvin commenting of flying “It’s alright, I’m used to it. I lived through the sixties”. That out-of-it past might explain why Scott doesn’t appear to dwell on having killed Santa (who rather benignly twinkles out of existence). Not so much why no one else – including Santa’s elves – does either. So it’s a promisingly twisted opening for the picture – the titular clause requiring Scott to take over– which has to be balanced against his insipidly earnest Hollywood kid insufferable son (Eric Lloyd).

Generally, though, The Santa Clause is one of those Christmas comedies that attempts to navigate a treacherously thin line between the saccharine and the derisive. There’s a degree of amusement to be garnered from Scott’s unchecked weight gain and hair growth, difficulties making deliveries and response to the arrival of his list in the post (Armand Assante). There’s also Scott explaining his job (toy salesman) to Eric’s class while his son insists he is Santa.

Balance against that a quite revolting-looking North Pole filled with little urchin elves (though David Krumholtz is a relief as more street-wise Elf Bernard), a horrifying musical interlude set to ZZ Top, and a subplot regarding the magic of allowing kids to have active fantasy lives, namely masquerading under the illusion that Santa is real – which is pretty much de rigueur for Christmas movies – and there’s more than enough to leave you slightly nauseous. On the plus side, psychology is presented as deeply unhealthy, in the form of Judge Reinhold’s stepdad, determined to dissuade Charlie of believing in Santa. Yet Reinhold turns out not to be as evil as in that actual Christmas classic Gremlins. His deep-seated Christmas problem is never getting a weeny whistle as a child.

And perhaps surprisingly, this isn’t a Christmas movie about reuniting families rent asunder – much of the third act revolves around the police pursuing and imprisoning Scott for child abduction, Reinhold stays married to Wendy Crewson, and Scott, despite the picture making pains to suggest otherwise, will likely see even less of his son in the future. Certainly, he’d be advised to avoid him like the plague, given Eric’s toe-gnarling bleat of “I love you Santa Claus” at the end.

But as festive fare goes, The Santa Clause is one of the more serviceable entries. And yet, one has to presume the Santa clause in Allen’s contract wasn’t getting to make two sequels, at least not at first, since it took nearly a decade for the first to arrive. All three movies showed the comedian’s appeal to be largely on home turf, even with the Christmas factor thrown in (75% of the gross came from the US).