Tell me, in all your calls has anybody ever impaled themselves? 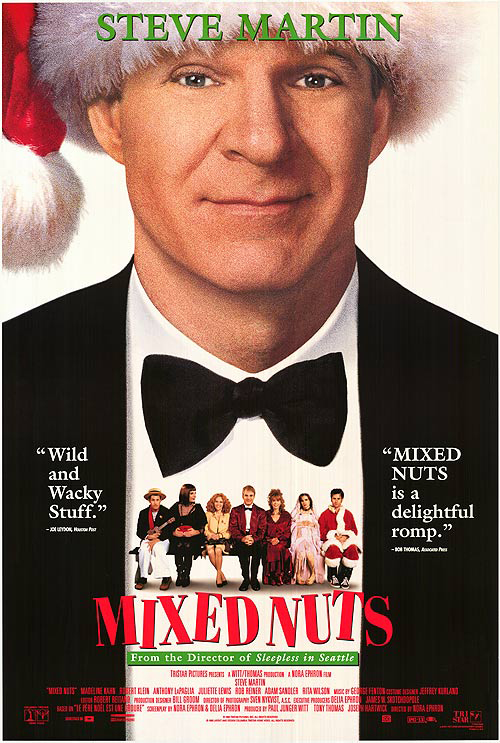 (SPOILERS) The faintly desperate title says it all. Farces are deceptively difficult to get right, which is probably why so few writers try them anymore. That Nora Ephron should have deep-dived into this Christmas black comedy immediately after one of her most celebrated romcoms (and certainly the most celebrated she directed herself) only makes her errors of judgement look that much worse. Indeed, the only bits of Mixed Nuts that vaguely land are the ones with romantic twinge.

Much of Ephron’s writing here (with sister Delia) appears to mistake humorous for noisy, frenetic and laboured, compounded by a mismatch of comedy styles from the various cast members that rarely leads to anything creatively salvageable. Mixed Nuts is an adaptation of 1982 original Le père Noël est une ordure, itself based on a stage play, so one can merrily blame the French if one so wishes. Or simply a Hollywood machine that never seems to learn with remakes. One might commend Ephron for attempting to introduce an edge to Yuletide fare, but on this evidence, black comedy really wasn’t her forte (and let’s face it, the same year’s hit The Santa Clause opens with Santa being killed by the lead character, while a decade earlier Gremlins was one of the biggest Christmas movies ever, so twisted Christmas flicks aren’t that rare; Bad Santa remains one of the most enduringly popular).

To that end, Ephron cast by-that-point-increasingly-less-wild-and-crazy-guy Steve Martin – not content with their previous collaboration My Blue Heaven being a hot mess? – as lead character Philip, head of suicide-prevention hotline Lifesavers. He’s distinguished by an unsettling dye job (did someone persuade him it made him look younger?) and – ho ho ho, because he mans a suicide hotline, right – really bad people skills. At one point, fellow worker Rita Wilson tells him he isn’t good in person, but there’s precious little evidence he’s other than bad on the phone also.

It’s Christmas Eve and the team – which also includes Madeline Kahn, who can’t be bad in anything, but even she’s tested here – is facing eviction from Garry Shandling’s landlord. Shandling is awarded a good line (the title quote), but he’s only cameoing so there’s really nothing else for him to chew on. And what is it with characters buying Christmas trees in movies on Christmas Eve? That should ring instant alarm bells.

Also in the cast are pregnant Juliette Lewis and ex-con boyfriend Anthony LaPaglia, the former about as irritating as she is in every one of her movies that decade, the latter giving her a run for her money. They’re tenuously linked to the main action, as is Adam Sandler (he lives in the same building as the hotline). Sandler’s '90s shtick of gurning man-child was never my favourite, and he’s on particularly resistible form here… until he meets Liev Schreiber’s transgender Chris, who earlier called the hotline and managed to elicit the address from Philip. Sandler sings her a song that’s surprisingly sweet and amusing, for all it being in keeping with his goofy character. But then, the only half-decent scenes in the movie are ones featuring Schreiber (in his movie debut). The aforementioned, and one prior to that where Chris dances with Philip, and the overstrained, wacky hijinks abate for several minutes.

Other business involves Kahn getting trapped in a lift, a fruitcake changing hands, a trip to Rob Reiner’s vet – the effect of LaPaglia taking pet meds is, well… skip Mixed Nuts for Kramer doing likewise in Seinfeld episode The Andrea Doria – and a subplot concerning the Seaside Strangler. I’m tempted to give a backhanded credit for Shandling turning out to have been the Seaside Strangler all along, revealed after he’s been accidentally shot in the head by Lewis and his body has been disguised as a Christmas Tree (which may sound funny, but don’t be misled). Except that gets everyone off their criminal behaviour, and it isn’t as if they haven’t got form; a misunderstood instruction by Wilson early on (“Click! Click!”) led to Steven Wright’s depressive blowing his head off.

The climax finds Philip rediscovering his “help others” vocation when he talks LaPaglia down from a roof, so Ephron keeps her foot in the heart-warming festive fare camp, I guess. I’ve seen it suggested that all the characters are Christmas archetypes (hence Lewis giving birth at the end), but I shudder at the very thought of such analysis bearing fruit. Enough Christmas movies go great guns at the box office despite being abjectly awful that it may sometimes seem as if they’re a guaranteed goldmine (how else do you explain Surviving Christmas, Fred Claus or Christmas with the Kranks?). You only need one Mixed Nuts to evidence that even the public can’t be suckered every time, however.