When I think of all the energy I spent visualising you as a radiant spirit. 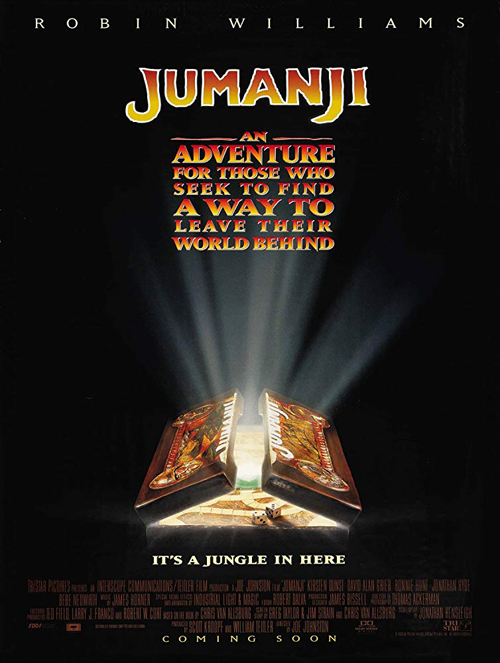 (SPOILERS) My main recollection of this original Jumanji-verse outing was that it was overly reliant on shoddy CGI. There is a hefty wodge of that, in particular the monkeys, but there’s also a significant physical effects element in Joe Johnston’s characteristically serviceable-but-nothing-more-than-that movie. Otherwise, while the actual environment is very different to the recent computer game-ised incarnations, it’s structurally fairly similar, in that the best of Jumanji is in the set-up, faltering somewhat once all hell breaks loose.

But while the new movies have comedy antics on their side – yes, I know this one has Robin Williams, but he’s in relatively restrained mode, and far less engaging once he gets rid of the whiskers quite early on; David Alan Grier probably gets more laughs – this undoubtedly has a better grip on the gameplay element. In that, while the mid-section of the picture sags significantly, you do actually get a sense of stakes. Nominally, the Jake Kasdan-helmed movies give you that with the three lives and varying limitations of special skillz, but the actual “plotting” of the game the players find themselves is on the indifferent and inconsequential side. In Jumanji, each roll of the dice unleashes some new torment or punishment, and if some of them come up short – Jonathan Hyde isn’t especially effective or amusing in his secondary role as big-game hunter Van Pelt – the later attempts to ensure all four players continue to take part while beleaguered by such impediments as being trapped in a floor work quite effectively.

Structurally, the picture singles itself out, offering not one but two prologues – so one less than John Carter – a brief one in 1869 in which the box containing Jumanji is buried, then an extended 1969 episode introducing us to young Alan Parrish (Williams’ character) and his fateful unearthing of the game. So the film proper begins about fifteen minutes in and 26 years later. There are some nice touches, such as adult Alan, now emerged from the game and teaming with its new players, youngsters Kirsten Dunst and Bradley Pierce, finding he must track down and persuade his childhood friend Bonnie Hunt to take part; previously, she fled the house pursued by bats rather than take her turn. These incremental parts are in their own way quite engrossing, so making the effects-fest that consumes the picture proportionally less so.

The conclusion is also perhaps a surprising choice, one I didn’t remember. In Jumanji: Welcome to the Jungle, Colin Hanks’ character escapes and is revealed to have grown up in full knowledge of his experiences, a twist on The Wizard of Oz “It was all a dream” scenario; here, due to the real-world impact, history itself is reformed, butterfly effect-like, and the present-day kids never even get to play (so creating a paradox). Such magical “business” is further emphasised by the festive setting of the final scene, as if to invoke A Christmas Carol, in which the players are reunited, yet only two of them are aware of their history together. The “It all works out nicely for all” requires rather a bit of leap for Alan’s dad, from detached and overbearing to suddenly empathic and understanding, but Hyde, in his other, bookended role, just about pulls it off (for what it's worth, which isn't much, there are limp thematic gestures in respect of the importance of one's parents, Dunst and Pierce having lost theirs, regaining them at the end, and Williams fretting that "26 years in the deepest, darkest jungles and I still become my father". It's probably for the best that none of this is very resonant). It’s also nice to see Bebe Neuwirth, even if it’s in a typically-for-her-thankless movie role.

Jumanji’s something of a messy affair, never quite giving the sense that its three writers have thrashed the source material – Chris Van Allsburg’s 1981 book – into a satisfyingly functional narrative. Nevertheless, it’s easy to see why it was reinvented and modernised, although it took almost twenty years of development hell to get there (a sequel had initially been planned for release in 2000). At the time, it felt like Jumanji was just another in a line of fantasy-tinged Williams pictures (The Fisher King, Hook, Aladdin, Toys, Being Human), so his presence held at least equal weight with the concept. You couldn’t say that of the current incarnation, even if those playing the avatars have become intrinsic to its success (indeed, all you really have to do when the concept inevitably gets stale is introduce some new comic faces to take over).