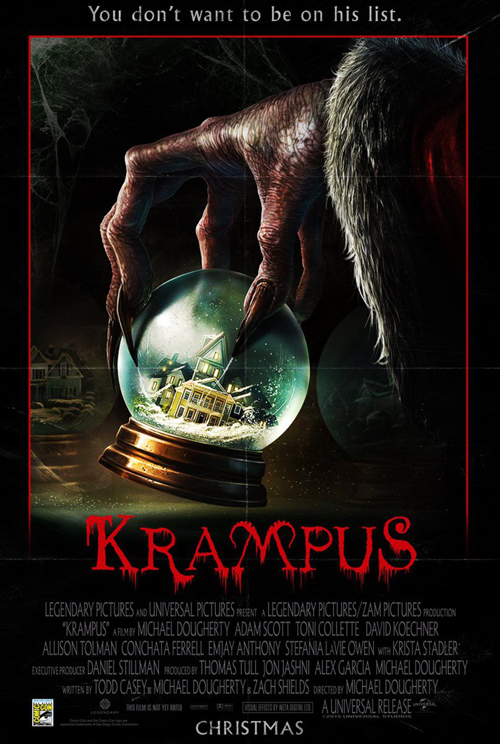 (SPOILERS) On the evidence of Krampus, you can see why Legendary Pictures might have considered it a bright idea to enlist Michael Dougherty to direct a Godzilla movie. Much less so why they’d also ask him to write one. This horror tale, based on the anti-Saint Nick, posits the title character as the punisher of those who have lost that Christmas feeling (rather than, per se, children who have misbehaved): “It’s not what you do. It’s what you believe”. Dougherty does a solid job with the setup, but unfortunately, he then lets it all go to waste.

Max (Emjay Anthony) tears up his letter to Santa and casts it to the waiting wind when his obnoxious relations descend on the family home and make his life a misery. In particular, poking fun of him for still believing in the portly fellow. A blizzard promptly appears from nowhere and cuts off their town, knocking out the power and phone lines. On further investigation, neighbouring houses and vehicles have been gutted. As Max’s sister (Stefania LaVie Owen) goes missing – we know the horned demon figure haunting the rooftops has got her – the hatches are battened down and an all-out assault on Max’s house begins.

There’s more than enough potential here, but after promising much in establishing how loathsome Max’s cousins and their parents are – David Koechner’s dad has reared gun-loving, red-blooded Republican kids, especially the daughters – Dougherty rather drops the tonal ball. He’s evidently striving for something in the vein of Joe Dante’s Gremlins, and the assault of gingerbread men and animated toys is in that ballpark, but he lacks an ounce of Dante’s wit or satirical sensibility, which means Krampus quickly devolves into a standard siege horror where the characters are picked off one by one. It looks very nice, and Dougherty creates an authentically desolate, creepy atmosphere, but the familiarity of the plot – just substitute a bad Santa for your standard supernatural slasher villain – entirely lets the side down.

There are decent performances from Adam Scott as dad, Toni Collette as mom, Allison Tolman as Max’s aunt and Conchata Ferrell as his great aunt. Krista Stadler is the German gran with a (animated) tale of a previous encounter with Krampus, but it underlines that Dougherty has backed himself into a corner whereby he’s unable to have sufficient fun with the idea. Even the twisted, fake-out denouement – it looks as if it was all a bad dream, only for a last-shot reveal that Max and his entire family are trapped in a snow globe in Krampus’ workshop – can’t make up for Krampus' descent into largely one-note scare tactics. If you want a darkly comic Yuletide horror, you’d be better to check out Rare Exports: A Christmas Tale instead.