Do you have a piece of cheese about you? 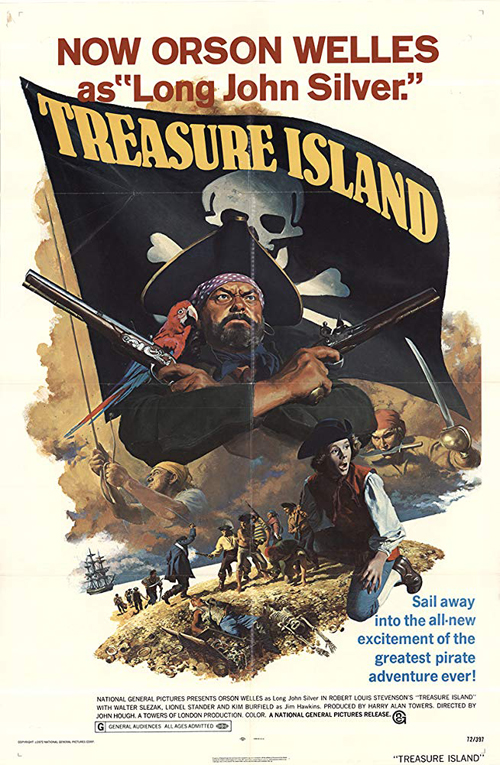 (SPOILERS) Originally planned by Orson Welles as a means to secure financing for Chimes of Midnight, his production of Treasure Island fell through only to be revived by old Welles associate Harry Alan Towers seven years later, but with the multi-hyphenate now demoted (mostly) to thesping duties. More ignominiously still, one of the most legendary voices in cinema suffered the fate of being dubbed by Robert Rieti.

Welles is also credited for the screenplay, but under the pseudonym OW Jeeves on the basis of the butchery his adaptation suffered (seven other writers were involved, including those writing dialogue for different language versions). John Hough meanwhile, whose next film would be the classic horror The Legend of Hill House, makes a rather patchy impression, leading one to wonder why he was so resolute that it was solely his work on screen, with no involvement from Andrea Bianchi and Antonio Margheriti; he said they were being credited for tax reasons.

If all that suggests a ramshackle affair, that’s how it feels. Lionel Stander shows up as Billy Bones in the first scene, and one instantly forms the impression he’d be perfect… in The Muppet Treasure Island. The rest of the dubbed cast includes Spanish (Angel de Pozo as Doctor Livesey), Austrian (Walter Slezak as Squire Trelawney, Towers’ wife Maria Rohm as a very comely Mrs Hawkins), Italian (Rik Battaglia as Captain Smollett) and French (Jean Lefebvre as Ben Gunn) actors. Kim Burfield is Jim Hawkins – Hough wanted Mark Lester – and is actually more serviceable than he looks in the part. As for Welles, he brings a twinkle, but he isn’t really allowed the chance to grandstand for the reasons outlined, and since he should be the fun core of the film, the whole ship sadly runs aground.

Most of the filming took place in Italy and Spain – I was surprised to see England listed, as there’s little doubt the opening inn scenes weren’t shot there. The general feel is of a missed opportunity. With a more stylish director or coherent script, this Treasure Island might have passed itself off as a spaghetti Stevenson or distinctive slice of euro pudding. Instead, the results are largely forgettable, the big man’s presence aside.