I don't want to be in that bubble for my entire life. 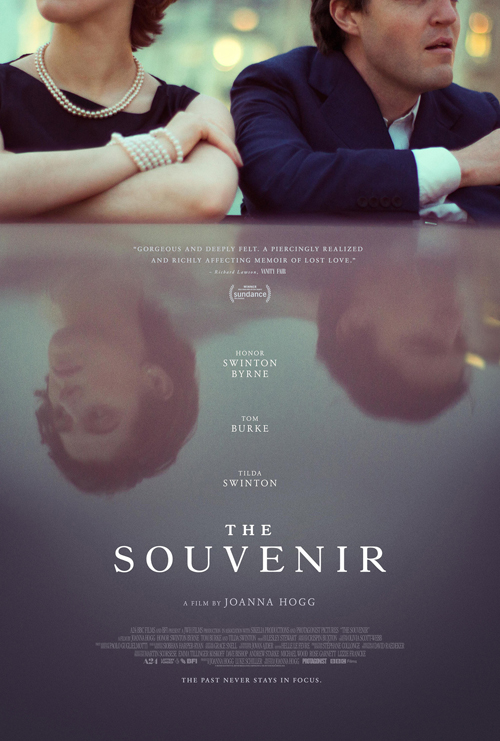 (SPOILERS) Joanna Hogg’s autobiographical drama has been appearing on many best of 2019 lists, but I found myself resolutely unpersuaded by The Souvenir and her low-key, interior approach to “herself” as a young woman and the dependant relationship she gets into with an older man.

Hogg’s style is simultaneously docu-drama in its naturalism – the photography is so flat, you sometimes wonder if it might have been shot on video - and lacking in the immediacy and intimacy of character that might bring. That’s clearly intentional, part of the milieu she is depicting, but it means it’s very difficult to engage other than passively with her characters. I never felt as if I was watching a whole person on screen, so uninterested is Hogg in digging beneath the upper-middle-class veneer of form and behaviour she finds in herself.

I’ve seen complaints made about The Souvenir purely on the basis of the class status of Julie (Honor Swinton Byrne, Tilda’s daughter) and how her privilege is further distancing, but that kind of inverse snobbery really indicates more about the viewer’s prejudices than the picture itself. There’s a meta discussion going on in the film, of the artist as a young (naïve) woman feeling she should be making a film about Sunderland dockers, “ashamed of her own privilege” as she is and told she should “make a connection between your experience and the experience you’re trying to film”, and her adult self, Hogg recognising that the only way she can be true to who she is an artist is to discuss those experiences that are her own, even if they run the risk of appearing exactly what they are (privileged, elitist, exclusionary).

I don’t think any of that’s a problem with The Souvenir per se; the likes of Whit Stillman and Woody Allen has been accused of such remote self-indulgence and still produced highly engaging films. The Souvenir’s problem is that, as a film, it feels as ineffectual and unassuming as Julie herself when her “muse” (in terms of this film) Anthony (Tom Burke) isn’t the focus.

He, at least, in all his unvarnished assuredness and assumed sense of insight, is a magnetic presence, in no small part due to Burke’s marvellously measured, persuasively commanding monotone. We see clearly how he gives off the confidence of “knowing” and so imbues a sense of self-worth in others (Julie); “You are lost and you’ll be lost forever” he tells Julie after informing her how special and fragile she is, much to her doubt that she is anything other than unexceptional (in response to which we, as viewers, find ourselves nodding vigorously). Anthony works – he says – for the foreign office, and there are engaging vignettes when he’s on screen in all his airy pomposity, such as a conversation with Julie’s parents (one of whom is Tilda herself) about the IRA. On the other hand, Richard Ayoade’s cameo as a vaguely obnoxious filmmaker is too broad and self-conscious for the picture Hogg has fashioned.

And the “reveal” (it’s only a revelation to Julie) that Anthony is a junkie serves to underline the impasse of unspoken normalcy that precedes any real interaction in the picture. This distance, I suspect, is intended to resonate with the viewer, whereby one reads deeply into what isn’t said, isn’t shown and the lingering intervals where nothing much at all happens, but my response was mostly that this lack was all Hogg had to say. The kind of lack of anything to say that leads to a deeply autobiographical tale of how one doesn’t have anything to say (and only gets that through the influence of another, larger than life persona). The frame of The Souvenir is one of the oldest there is, and the only variant Hogg offers is to deflate everything that usually makes such tales of manipulation and addiction and obsession so compelling.

I wasn’t completely down on The Souvenir by any means. I admired the performances, even though I’m not sure if you can tell from this if Swinton Byrne will be a chip off the old block. There is something to be said for the capturing of reserve, particularly combined with an improvised approach, and the film does at least in part offer up some astutely-observed nuggets, but I can completely see why others compare Hogg’s films to watching paint dry. A film like this shouldn’t so much grip as mesmerise, but Hogg’s is quite resistible.