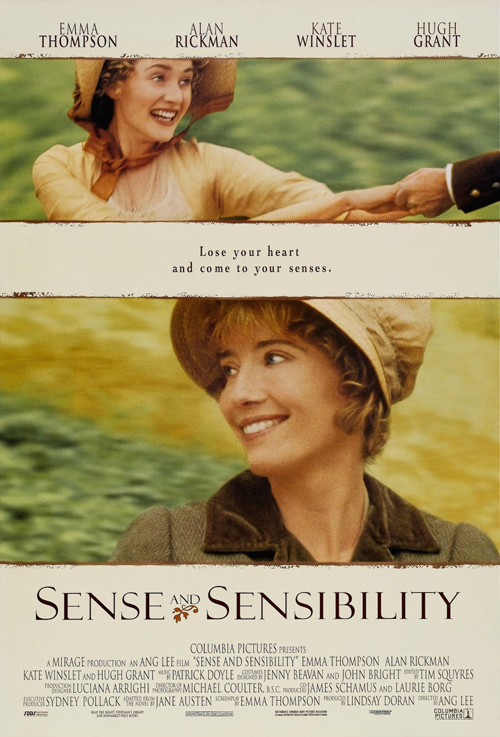 (SPOILERS) It’s probably a coincidence that Sense and Sensibility arrived just as Merchant Ivory had peaked, with back-to-back Best Picture nominations for Howards End and The Remains of the Day; they’d never have it so good again, having successfully earmarked a regular awards slot for the sumptuous literary adaptation that Sense and Sensibility duly snapped up. On one level, its success is entirely understandable, screenwriter (and star) Emma Thompson taking pains to make the material accessible in a romcom vein while avoiding the indifference of treatment that characterised subsequent Austen Emma. On another, it’s still rather formal and reserved, despite the choice of Ang Lee as director; I’d argue that Joe Wright delivered a more engaging big screen Austen overall with Pride and Prejudice.

Apparently, Thompson and producer Lindsay Doran didn’t want the story to seem as if it was about a couple of women waiting around for men, which is of course, exactly what it is; whether Elinor (Thompson) and Marianne (Kate Winslet) Dashwood’s polar introvert/ extrovert personalities and interactions offset this is down to personal mileage. For me, coming to the film without a foot in Austen’s prose, the various entanglements and intimations are merely diverting rather than engrossing, and mildly amusing rather than masterclasses in wit.

Essentially, Lee’s film is likeable but unpersuasive as anything more than agreeably lightweight period fluff; while “hard up”, the Dashwood sisters’ most pressing concern is still romantic, rather than survival-based, so the stakes are determinedly low key. Not a problem per se, but Sense and Sensibility lacks that something extra to qualify as a first-class feature in its own right, rather than merely a perfectly respectable (film or TV) adaptation. The performances are all thoroughly decent, with Hugh Grant doing his patented stuttery diffident thing, Alan Rickman is his brand icy, honourable reserve (but without the villainy), Elizabeth Spriggs and Robert Hardy being uproarious, Harriet Walter being a right cow, Hugh Laurie being a caustic bugger (putting out feelers for House), Greg Wise a swoonable cad and Imogen Stubbs being… remember Imogen Stubbs?

It’s notable that Lee – who, alas, has been making more rather than less dodgy movies of late – criticised his film for lacking energy, as that’s exactly the charge I’d lay at its door. Sense and Sensibility feels almost functional at times, lacking the extra cinematic touch that would distinguish it from an accomplished BBC adaptation. That said, given the other nominations for Best Picture Oscar that year, it makes for perfectly sufficient competition, with only a wee porker as a clear frontrunner. And let’s face it, some of the restraint exhibited by Thompson wouldn’t have gone amiss in Randall Wallace’s screenplay for the night’s winner.