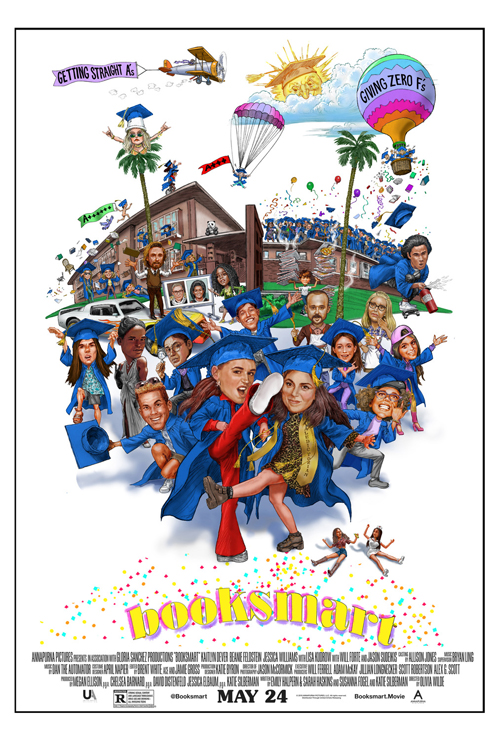 (SPOILERS) Expectations were high for Olivia Wilde’s directorial debut, but Booksmart ended up underperforming at the box office, for reasons post mortems couldn’t quite decide. Some have suggested a gender-reversed Superbad simply wasn’t going to find an audience, because the audience for those types of comedies is predominately male. Others that it was too “woke” for its own good (that cinemagoers generally aren’t interested in the progressive obsessions of the Twitterati). Whatever the reason, it deserved a wider audience, as Wilde takes an inventive screenplay and attacks it with style and humour. They should be throwing Charlie’s Angels projects at her, not Elizabeth Banks.

I’m slightly surprised the screenplay is as good as it is, given there are four credited writers (Emily Halpern and Sarah Haskins penned it and it was then rewritten first by Susanna Fogel and then Katie Silberman). That often spells trouble, but the joins are remarkably seamless in this tale of bookish best friends Amy (Kaitlyn Dever) and Molly (Beanie Feldstein), the former a budding lesbian and the latter class president, who learn that many of the classmates they looked down on for partying during school have nevertheless also managed to gain places to prestigious colleges. Aghast and outraged, they decide to use their last night before graduation to go to a party themselves (“I am going to experience a seminal fun anecdote and we are going to change our stories forever”).

It’s a serviceable set up for strange and wacky encounters en route, the kind of template that has been fruitful for a variety of quest comedies (Harold and Kumar Get the Munchies springs to mind), and those encounters and detours are often agreeably inspired, including a deserted party on a rich kid’s yacht and a murder mystery event where they discover they were earlier spiked with hallucinogenic strawberries. There are random encounters with their principal (Jason Sudeikis) and a pizza delivery man (Mike O’Brien), who later turns out to be the dreaded Valley Strangler. Eventually, they reach the party they’ve been striving to attend, where prospective romantic liaisons are dashed and others develop.

The essential good-heartedness of Booksmart reminded me more of John Hughes than the acidic gross-out of the Apatow oeuvre, which is to its credit. Sure, there’s vomiting and the kind of dialogue Hughes would have backed nervously away from (“You know what, my vagina is stuffed with diplomas”), but the rites-of-passage element, of friends looking out for each other, arguing and making up, and of tentative liaisons, is very much the kind of material that was Hughes’ bread and butter. And Wilde’s visual style, aided by cinematographer Jason McCormick, takes the kind of larger-than-life approach Hughes increasingly favoured and runs with it, most redolently in its marriage of image to soundtrack, which is funny, furious and freewheeling.

Apparently, Wilde’s guiding principal was that high school is war, but she has created a movie where no one leaves as truly damaged goods, and even the professed nerds are extremely articulate and desirable (to someone). Everyone who’s cruel or malicious to someone else has their own story to tell, and is probably just misunderstood when it comes down to it. Which some might call overly optimistic and massaging the actual horror of school, but isn’t that exactly what Hughes tended to do?

Leads Dever (of Justified) and Feldstein (of Jonah Hill sibling status, and previously Lady Bird) have great chemistry, but Feldstein inevitably steals the movie in the same way her brother is prone to, great with the sarcasm and rage and also with the sincerity. There are some lovely supporting turns here too. Billie Lourd has a nothing role in the Disney Star Wars trilogy, but she’s very funny as vitamin-snorting, out-there-somewhere Gigi, who somehow manages to reach each successive destination before the lead duo, despite their having left her behind (“How are you dry?” they wonder after they last saw her diving into a harbour). Skyler Gisondo offers the movie’s closest approximation to Pretty in Pink’s Duckie as rich kid Jared.

Wilde’s major plot addition was apparently the trip sequence, a very amusing excursion into animation as the girls see themselves as plastic fashion dolls. It’s the closest Booksmart comes to the anything-goes attitude of Harold and Kumar and possibly shouldn’t really fit, but Wilde’s done such a bang-up job of creating a heightened vibe by this point, through visuals and supporting characters, that it slots right in. Booksmart had a lot of hype surrounding it, but unlike many such movies of 2019, it’s one that entirely lives up to the good press. It’s an uplifting, poppy, feel-good movie that leaves you on a high.