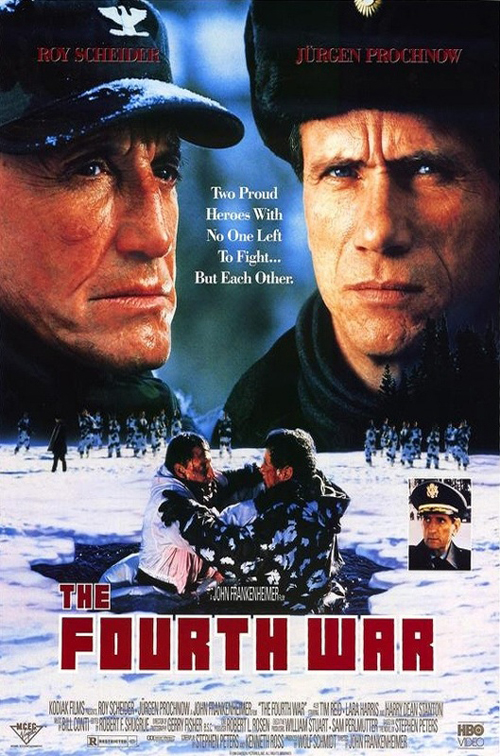 (SPOILERS) The appeal of John Frankenheimer’s only just Cold War thriller (it’s set in November 1988) is all in the title. Not that the idiosyncratic plot doesn’t have a certain appeal, but it wasn’t a broad one; The Fourth War came out three weeks after a Cold War thriller people wanted to see (The Hunt for Red October) and duly bombed.

Roy Scheider’s colonel, a troublemaking Nam vet, finds himself posted to West Germany, overlooking the Czech border, where he instantly begins provoking the Soviets, and most especially his like-for-like in attitude opposite number Jürgen Prochnow. What starts as lobbed snowballs quickly escalates to cross-border incursions, leading Soviet soldiers in a chorus of happy birthday (at gunpoint) and blowing up vehicles and lookout towers. Roy’s a very naughty boy, basically.

On that level, even if it isn’t a subtle one, the screenplay by Stephen Peters (based on his novel; he’d later pen Wild Things) and Kenneth Ross (solid spy fare The Day of the Jackal, The Odessa File, Black Sunday) displays a venerably unvarnished sneer towards the military mindset, whereby overgrown boys who don’t really perceive the carnage they’re inflicting play games that should have been left in the schoolyard. The trouble is, The Fourth War isn’t clever enough to be a satire and it’s too leaden to work as a thriller.

The title, though, is dynamite, conjuring an image of a movie you’d really want to see (indeed, ever since I saw the trailer back in the day, I thought it must at least be worth a look). You can imagine it being greenlit on that title alone, based on the Einstein quote, here relayed by Harry Dean Stanton’s general, that while he couldn’t predict how a Third World War would be fought “I can, however, predict that the Fourth World War shall be waged with sticks and stones”. Which is how Scheider and Prochnow end up duking it out.

Along the way there’s an apparent defector (Lara Harris) and a put-upon lieutenant colonel trying to deal with Scheider’s unruliness. Stanton is hilariously miscast, unless Frankenheimer was intending for him to provide a woefully inept impression of a general. As for the director’s work on The Fourth War, it’s competent, but he hadn’t wowed anyone since the mid-70s. He’d still have Ronin in him, though, so there’s that.