Just imagine having a stuffed werewolf staring at you from the wall! 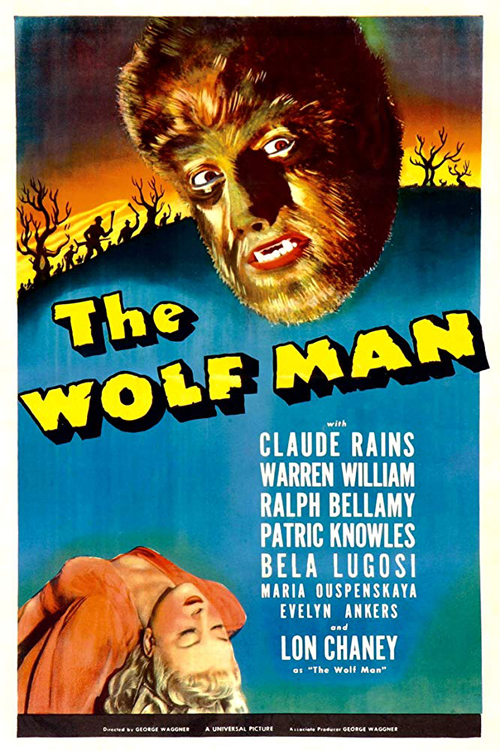 (SPOILERS) By and large, visiting or in some cases revisiting Universal’s Essential Collection of horror classics has been a rewarding experience. That comes rather unstuck with The Wolf Man, directed with little in the way of style and panache by George Waggner (he end up in TV) and suffering a personality bypass in the form of leading wolf man Lon Chaney Jr. I’ve mainly been familiar with the film for its legacy in werewolf lore, and it’s definitely one that’s better cited than experienced.

The Chaney Jr aspect is perhaps surprising, since anecdotally, he seems to have been a bit of a character –apparently, Universal gave his dressing room to co-star Evelyn Anker after he smashed up studio property while drunk – a practical joker and a stroppy so-and-so. And he was rather good in The Defiant Ones, a decade and a half later. But Larry Talbot is such a wet blanket, you’re begging for the locals to do him in. There’s some strong support from Claude Rains as his dad (the height genes must have skipped his generation) and Maria Ouspenskaya as a doom-mongering gypsy (Bela Lugosi also appears briefly, infecting Larry), but it isn’t enough to shift focus.

The Wolf Man’s at its best in the whispering (or shouting) campaign enacted against Larry by the Welsh townsfolk, noting that murders only seem to have started since he returned from seventeen years’ absence. They’re not far wrong, to be fair to them. It seems screenwriter Curt Siodmak’s original draft was very much suggestive rather than explicit, that the wolf might all be in Larry’s mind, and a fragment of this certainly survives in Rains pleading rationality to his son. At one point, he even accuses Warren Williams’ Dr Lloyd of “talking like a witch doctor” in indulging Larry’s fantasies.

Indeed, given how inauspicious the whole production is – the werewolf makeup is laughable rather than threatening – you’d be forgiven for wondering how the sub-genre ever developed any teeth, let alone credit that The Wolf Man proved such a success, Chaney returned to the character four more times during the 40s, but then, he became a horror mainstay, earning the dubious distinction of playing all Universal’s star monsters during that period.