Mind your business, turkey. I’m having a moment. 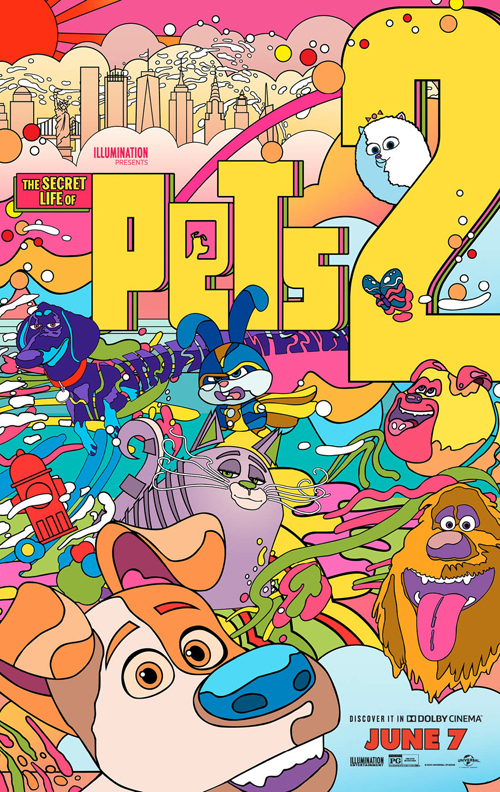 (SPOILERS) It says something regarding the misplaced confidence Illumination had in this would-be second franchise that they included Minions and Pets in the animated logo preceding The Secret Life of Pets 2. While this sequel took a not-to-be-sneezed-at $433m, it was rather shockingly (not least to Universal) less than half the original’s global gross. Tellingly, no third instalment has been announced. It shouldn’t be a surprise, as this movie, following a decent but unremarkable predecessor, is patchy at best. Or patchwork, more accurately, attempting to juggle three separate plotlines and rather rudely mash them together for a breakneck but unengaging finale.

Of course, one might put the sequel’s failure down to the absence of lead actor and prodigious masturbator Louis CK as the voice of Max, replaced by the much more loveable and less prone to exposing himself Patton Oswalt. Who knew Louis had so many fans, vowing to boycott their favourite animated film’s follow up? The inconspicuous change does, at least to my ears, rather illustrate the fallacy of casting name performers in animated fare. Particularly so when the lead dogs of Pets (which includes Duke, much less prominent this time) are so lacking in charm. More interesting supporting characters isn’t unusual in an animation, but in an anthropomorphic animation there’s nevertheless less excuse.

The Secret Life of Pets 2 hasn’t so much been split into three as returning writer Brian Lynch has failed to come up with a plot that stretches to ninety minutes. So he sends Max and Duke off to the farm, following a false alarm that Illumination would take a dump into Pixar territory with the addition of a child to the family unit. There’s a moral to this, expounded at the end (“Everything changes, nothing stays the same for long… run for it, or run at it”) as Max, in substitute parental responsibility mode, gives himself a nervous disorder (scratching) due to his incessant worrying over the welfare of the little family urchin.

It takes the wisdom of Harrison Ford’s Welsh Sheepdog Rooster to set him straight, the former’s tough-talking (borderline reactionary?), ways of nature turn enabling Max to discover his hero within. Ford’s really good, actually. Maybe it’s just that Rooster’s an old grump, but it might be his most convincing performance since Presumed Innocent. And as a CGI dog (I’m sure there’s a Call of the Wild joke here somewhere, since he’ll be acting against one in that).

This storyline is only so-so, though, which is at least more agreeable than the desperate and lazy one featuring Kevin Hart’s super bunny Snowball, who contrives to aid Tiffany Haddish’ Shih Tzu Daisy in rescuing a white tiger cub from a circus owned by an evil Eastern European (Nick Kroll). Only to be pursued by wolves, which is where everyone’s paths converge for the redundant train chase climax.

The thread that does work, however, involves Jenny Slate’s Pomeranian Gidget. Persuaded by Max to look after his toy bumblebee, and seeing it as a romantic gesture on his part, she promptly loses it in an apartment full of cats and must masquerade as one in order to retrieve it. The sequence shows Illumination at their best when indulging the overtly cartoonish rather than more tied-down character work, and there’s a decent extended gag involving a laser dot.

Other elements in The Secret Life of Pets 2 also raise a smile. Lake Bell as obese tabby Chloe, purposefully knocking ornaments to the floor. A sequence at the vet, where Max witnesses a variety of ailments (“I bring her a dead mouse – right in the garbage!”) But Dana Carvey’s Basset Hound training pups to upset humans (pooping where they shouldn’t) stretches the joke too far. Chris Renaud is Illumination’s co-mastermind, and co-directs here with Jonathan del Val, but one rather gets the feeling they’re running short on the inspiration that once made them stand out. They only have more Minions and another Sing on their upcoming slate, which is the kind of hole DreamWorks dug for themselves.