Mr Denby, I'm not ignorant, and I'm not selling my land. And I'm not giving my children over to anyone else to raise. 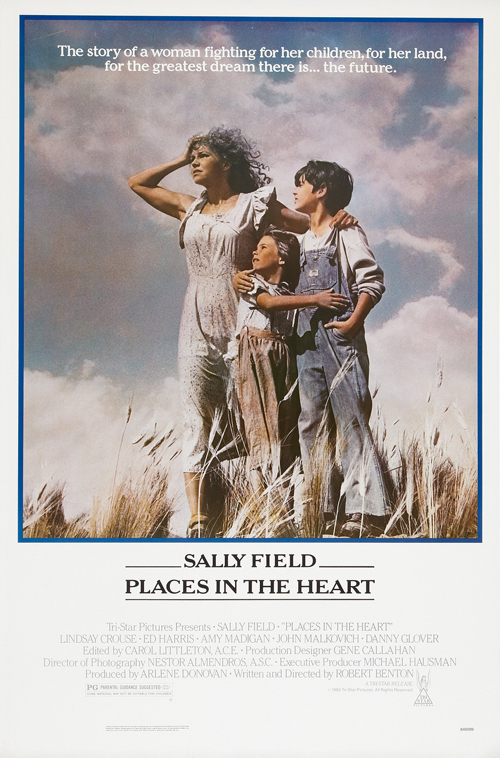 (SPOILERS) The one that’s more famous for Sally Field’s Oscar acceptance speech than the film itself. Which is to say, despite its Best Picture Oscar nomination, I suspect few really loved Places in the Heart, they didn’t really love Places in the Heart. It’s a slight, pleasant American period (Great Depression era) picture that contrives to put forward an “It’ll be alright” homespun, righteous quality, despite the horrors going on at its fringes. Which can be affecting when done well (The Shawshank Redemption), but here, it tends to wither in the face of a lack of real backbone.

That’s a tendency with Robert Benton’s films, though, most noteworthy when there’s a strong character at the centre (Kramer vs Kramer, Nobody’s Fool), but too often slightly stolid. Field, as Places in the Heart’s steadfast widow Edna Spalding, resolute that she won’t lose her house and family, and operating as an institution for outsiders or the disenfranchised (Danny Glover’s drifter Moses, John Malkovich’s blind veteran Mr Will), is fine but so wholesome she’d be shoe-in for permanent residence on Walton’s mountain.

Accordingly, there’s much more life to be found in Glover and Malkovich’s supporting roles. They’re very much playing types – thief with a heart of gold, recluse who thaws out when confronted by a family – but succeed in breathing life into the familiar. Pauline Kael caustically suggested “Benton has conceived Mr Will as if blindness purified him and drove out ordinary faults; blackness does the same for Moses”. There’s something in that, but nevertheless, the actors make the parts compelling. Faring less well are the redundant extended family members (Ed Harris, Lindsay Crouse, Amy Madigan, Terry O’Quinn), fine performers all, but given subplots that fail to amount to very much and only mildly stir any interest, if they’re lucky (Crouse and Malkovich were both Academy Award nominated for their efforts).

The main thrust of the plot finds Edna attempting to grow and pick a cotton crop to prevent foreclosure by the bank, in the face of a tornado and assorted naysayers. Naturally, she prevails. Cynicism duly stated, there are nevertheless a couple of curious elements here, for a picture that’s so undilutedly “nice” (how could it be otherwise with Field starring, though Jessica Lange was apparently the first choice). The opening, where Edna’s husband (Ray Baker) is accidentally shot by drunk black boy Wylie (De’voreaux White, later Argyle in Die Hard), subsequently sees vigilante justice enacted; Wylie is tied to a truck and dragged behind it, his body then hanged. Later, Klansmen attempt to lynch Moses. In another film, Edna might have been required to stand up to this, but Benton has her seeing but oblivious – or too focused on her grief – in the first instance, and wisely resisting speechifying in the second (Moses elects to leave the farm, as he knows this will not be the end of it).

Then there’s the symbolic ending, which with the presence of O’Quinn, and the gathering of the living and the dead, in a church, was surely an influence at some point – possibly a very desperate point – on Damon Lindelof. Virtue and essential goodness are eternal and blessing awaits us all, or at least those of us exhibiting such qualities, in the beyond. An appealing sentiment, but still a little odd to find it so blatantly bannered across the final scene. Talking of bannering, the poster was always one that struck me; in combination with the thematically portentous title, it’s far more evocative than the actual picture.

Places in the Heart was evidently a labour of love for Benton, based on his great grandmother’s experiences, whose husband was also shot, and it’s a thoroughly decent, high-minded affair, which is surely why Kael suggested “All it lacks is Lassie”. Did it stand a chance at winning Best Picture? Not with Amadeus and The Killing Fields in the running (against A Passage to India and A Soldier’s Story, possibly more of a shot). As for Field, she was probably as good a winner as any that year, although I suspect, had A Passage to India really been David Lean’s last great hurrah, rather than slightly disappointing, Judy Davis would have been duly recognised.

Out of seven nominations, Places in the Heart won two statuettes, the other being for Benton’s screenplay (his fourth writing nomination out of five, and his second win in that field); it was a year with some curious possibles for scripting (Beverly Hills Cop surely coasted on Murphy’s improv, not the screenplay, while Splash deserved its nod, but still represents something of an outlier). The film is destined to rank as one of those half-remembered nominees, more engaging for revisiting a cast who have gone on to more illustrious things than its somewhat staid storytelling.