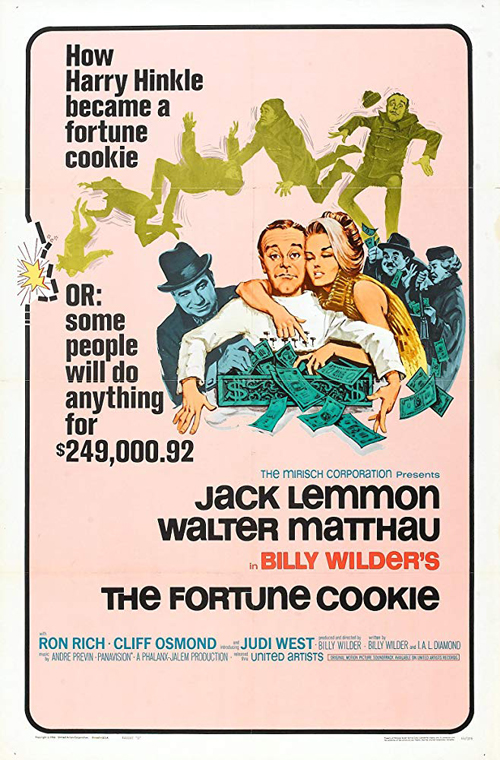 (SPOILERS) Despite its pedigree – director and writer Billy Wilder reteaming with Jack Lemmon, the first teaming of Lemmon and Walter Matthau, a clutch of Oscar nominations – The Fortune Cookie isn’t up there with the best of Wilder’s Lemmon collaborations. Which were, at this point, in the past.

It finds Lemmon as Harry Hinkle, a cameraman accidentally bowdlerised by Ron Rich’s footballer Luther “Boom Boom” Jackson, pretending, at the behest of his shyster lawyer brother-in-law Matthau (William H “Whiplash Willie” Gingrich), to be much seriously injured than he is in order to win the insurance money. Boom Boom befriends Hinkle meanwhile, and Hinkle’s ex-wife Sandy (Judi West), with whom he is still besotted, comes back on the scene, being the gold digger she is.

The best parts are all Gingrich’s bloodhound cynicism, trying to stick it to the big law firm (situated in the same building – an amusing scene sees him invite them down to barter) and pulling the wool over the eyes of the private investigator snooping on Harry. But there’s something thin about the greater whole, and Lemmon’s patented brand of exasperated loserdom is really rather trying (he’s forty at this point).

We’ve seen him do this before, but there’s a lack of emotional core and insufficient zest to go with it this time. One might argue, rather like Hitchcock, Wilder peaked with the attention his film of 1960 received, and (to a lesser extent than Hitch) it was all downhill from there. Harry’s relationship with Bang Bang is winsomely benign, such that, in an era-friendly turn, his already reluctant deception falls apart when he is roused to ire by racist language used regarding Jackson (the message being: see what a good a guy Harry is, deep down?)

Wilder was nominated for his screenplay, which tries to underline it’s “distinctiveness” by adding arbitrary chapter titles throughout, as were the art direction and cinematography, but it’s telling that it was only Matthau, as Best Supporting Actor, who was rewarded. More telling still that this was the last time Wilder would receive even that lesser level of awards attention. Basically, The Fortune Cookie is an agreeable enough, over-extended Sergeant Bilko scam plotline, but without that series’ sharpness borne through brevity.