They seem to be attracted to your increasing nudeness. 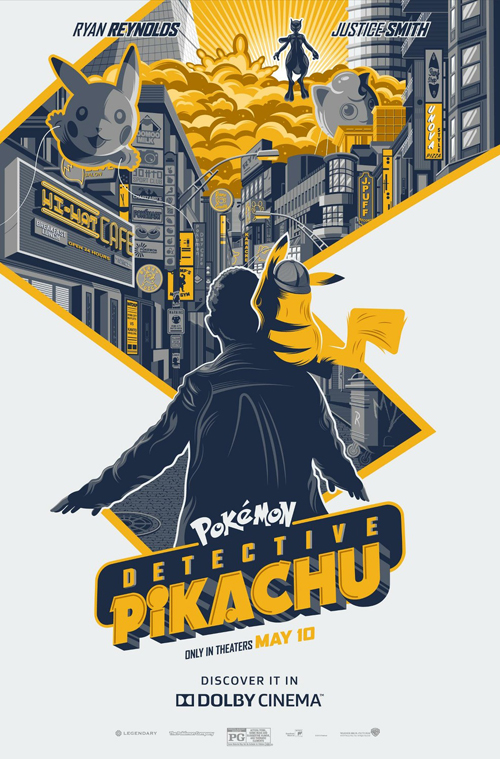 (SPOILERS) I was put in mind of Shazam! watching Pokémon Detective Pikachu, another 2019 tentpole that somewhat underperformed based on expectations. Not particularly due to any plot resemblance, but because both movies fall apart under the weight of an overblown and underwhelming finale. In the case of Shazam! that may be more damaging to its prospective sequels (if they keep the team of super-adult kids), whereas Detective Pikachu will simply have to struggle with a whole heap of unnecessary expositional baggage attempting to imbue the proceedings with emotional resonance.

Which it doesn’t. Detective Pikachu is much more fun when Tim (Justice Smith) is working with his dad’s Pikachu partner, whom he can mysteriously understand via the voice of Ryan Reynolds. I neither knew nor cared about any of the accompanying Pokémon lore, mostly because Rob Letterman manages to operate in appealing quasi-Who Framed Roger Rabbit territory, introducing us to this world via its main characters embarking on a detective case; as a result, the background details tend to be integrated relatively seamlessly.

Reynolds delivers the expected quips as assuredly as one who has recently done the same for Deadpool, only less crudely here (“Talk, you stupid mime!”; “I think he just peed a little. Oh no, that was me”; “I can stop whenever I want of his coffee addiction”; and a Seinfeld quote). His presence, and Smith making a likeable partner, keeps this chugging along agreeably as Tim tries to find out what happened to his father and determine the source of some mysterious vials, the gas from which causes Pokémon to become enraged. Kathryn Newton also provides engaging support as junior reporter Lucy, whose Pokémon Psyduck is in permanent danger of exploding if it gets stressed out.

Unfortunately, the more plot is revealed, the less satisfying the whodunnit becomes. Bill Nighy is on worst autopilot form as Howard Clifford, the genius of Ryme City, where Pokémon and humans co-exist in harmony. He plans to use a Mewtwo – a slightly sinister-looking cat thing – to fuse humans to their Pokémon (doing this to the Mewtwo has enabled him to escape his wheelchair). In the course of discovering his villainy, we learn his red herring suspect son Roger (Chris Geere) is innocent. We also learn that Detective Pikachu can talk because Tim’s father Harry was fused with the Pikachu, in the process erasing their memories. Consequently, when Tim is restored to human form he is Ryan Reynolds, with Ryan Reynolds’ voice. So why did Tim not recognise his dad’s voice? Letterman has admittedly addressed this, but if you’re satisfied by his response, you’re definitely less rigorous about plot logic than I am.

So the ending suffers from all of that, as well as a prerequisite over-reaching fight sequence in which Pikachu must learn to use his powers (drawing on the advice of Tim, a one-time wannabe Pokémon trainer who instead decided to be an insurance adjuster). I could go with all the Pokémon lore and continuity while the movie was offering a high ratio of amusement, but the finale tips an inventive affair into exhausting dullness, as well as being devoted to making sure the anomalous abilities of our title character are explicable in-universe. There are five credited writers on this thing, including Colin Trevorrow’s pal Derek Connolly, so I’m only surprised it didn’t become a convoluted mess earlier.

Still, Letterman, who hasn’t overly impressed with his prior live-action work (Gulliver’s Travels, Goosebumps) delivers an effectively realised world of integrated goofy cartoon characters and neo-future noir, and there’s enough that works in Pokémon Detective Pikachu to make the announced follow up a not entirely unappealing prospect.