You’re a slut with a snake in your mouth. Die! 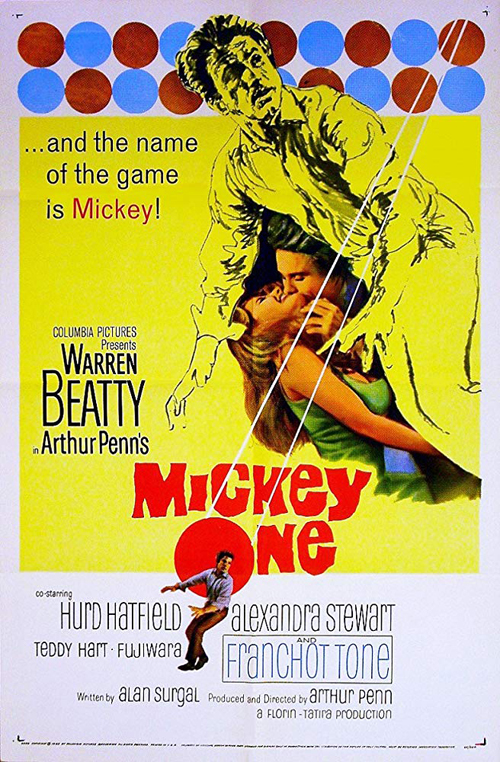 (SPOILERS) Apparently this early – as in, two years before the one that made them both highly sought-after trailblazers of “New Hollywood” – teaming between Warren Beatty and Arthur Penn has undergone a re-evaluation since its initial commercial and critical drubbing. I’m not sure about all that. Mickey One still seems fatally half-cocked to me, with Penn making a meal of imitating the stylistic qualities that came relatively naturally – or at least, Gallically – to the New Wave.

As such, one might argue that the miscasting of Beatty as a stand-up comedian who goes on the run from the Detroit mob and fetches up in Chicago, his encompassing paranoia failing to prevent him from returning to the stage (and acclaim), is intentional. I mean, what could be more French than an unfunny comedian everyone thinks is funny? Except that Jean Paul Belmondo would’ve actually been funny being unfunny. Beatty can be very funny, but not in a way that could masquerade as a profession, any more than his rapping in Bulworth is something to cherish (well, not in a legitimate way). Beatty complained Mickey’s gags weren’t amusing, which may be beside the point (there’s precious little stand-up in the movie anyway), but more of a concern is his complaint that “I didn’t know what the hell Arthur was trying to do… I’m not sure he knew himself”.

Rather than “a jazz film with an edgy style” I’d tend to agree with Pauline Kael’s ruthless assessment that Mickey One is “an art film in the worst sense of that term”, evidence of the adverse results of Penn being granted full control and working with “a poor, pretentious mess of a script”. Peter Biskind, in Star, notes Richard Sylbert’s appraisal (“Mickey One ½ as in, ‘Let’s be a foreign filmmaker, say, Fellini’”), this delivered in part by way of a McCarthyism parable.

The black and white photography is effective, courtesy of French (but of course, albeit Belgian-born) cinematographer Ghislain Cloquet, but an aggravating self-consciousness seeps from the picture’s every pore thanks to a director who sees something he likes but lacks the sensibility to really express that something himself. Visual style does not a great movie make, even if there are individual moments that are, such as the striking scenes of itineracy during the opening on-the-run section. There is an effective sense of paranoia, but Mickey’s existential turmoil also becomes wearing. And then there’s the sped-up comedy footage of a Richard Lester movie, and trampolining. Penn would admit to his failures (noting that movies can be playful with narrative, and go off at tangents, he concluded “Because my main storyline was not strong enough, the tangents became the dominant aspect of the film”).

Mickey One is at least an interesting picture from the perspective of where it comes in both Beatty’s and Penn’s careers. Beatty having been a successful romantic lead but restless to be something more than that, and Penn knocking around trying to find his groove (arguably, he never really found it). Alexandra Stewart is Beatty’s main squeeze, Hurd Hatfield (“All organic foods”) and Jeff Corey memorable as the “double act” who want to book him big, and some of Alan Surgal’s dialogue (his only big screen credit) is memorable (“I’m the king of the silent pictures. I’m hiding out til talkies blow over”; “Of what are you guilty?”: “Of not being innocent”; “He’s in with them”: How do you know?”: “Because I don’t know that he isn’t”). But you can tell when this kind of thing is forced, and if Penn hasn’t made a bland Hollywood movie, a faux New Wave one isn’t actually all that much more admirable.