Get your finger out of the end of my gun! 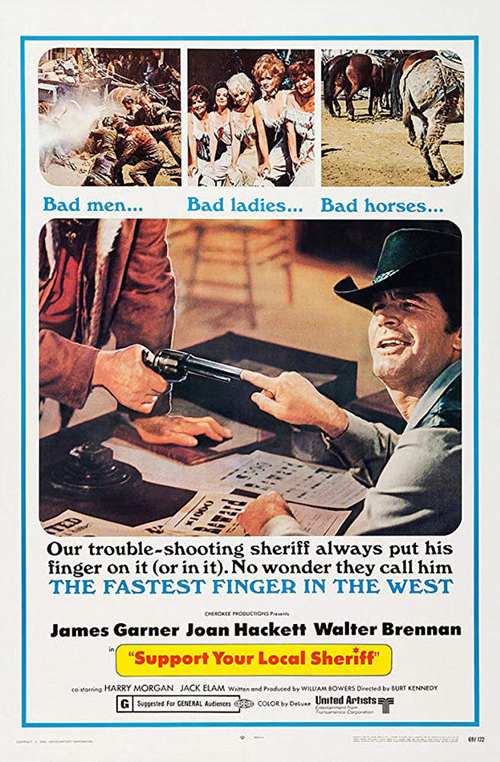 (SPOILERS) James Garner was, of course, no stranger to the western, having made his name in Maverick, which if not actually spoofing the genre, coasted along with easy-going comedic undertones. The actor’s greatest claims to fame would be on the small screen, but between his heyday bookends of that show and The Rockford Files, he delivered several memorable movie roles; he’s likely best known for the Scrounger in The Great Escape, but coming in second was this super-relaxed, super-confident Jason McCullogh in Support Your Local Sheriff.

Support Your Local Sheriff arrived in a year of revisionist westerns – Butch Cassidy and the Sundance Kid, Once Upon a Time in the West, The Wild Bunch – but largely riffed on the genre’s traditional elements, courtesy of veteran director Burt Kennedy and writer William Bowers. If Blazing Saddles would find Mel Brooks going to extremes not seen since Bob Hope in Son of Paleface, Garner’s film would largely fashion a gentler template for itself, concentrating on the absurdity of certain genre clichés rather than outrageousness or fourth-wall breaking (although, we’re treated to the latter courtesy of Jack Elam in a final monologue).

The picture reportedly came in cheap and was all-but written off by United Artists until Garner persuaded them to persevere, and it became a word-of-mouth hit (it also had to dodge a lawsuit from another of the year’s westerns, Paint Your Wagon, famous for showing off Clint crooning). It was always a favourite in my home growing up, since Garner was too (The Rockford Files was a fixture), and it’s easy to see why even now. The comedy of cool is perhaps surprisingly rare, more usually revolving around pain, mishap, embarrassment and ineptitude. In Support Your Local Sheriff, Garner can do everything, is entirely unflappable and effortlessly charismatic.

You start out doubting that he’s exactly as capable as he is, especially when he shows off his gunplay skills by announcing “Bullet went through the hole in the centre” of a washer. It may be a con, as likely of being true as his running announcement that he’s just passing through on his way to Australia (and has been for four years). But no, he really is (capable). And proceeds to illustrate this once he has taken on the poison chalice of sheriff (predecessors are dead or have run off), immediately arresting the youngest of the Danby clan (Bruce Dern) for murder. The Danbys are fleecing the Colorado goldrush town by virtue of a commission charged to everyone transporting gold, which has to pass through their territory. On top of which, they’re a law unto themselves.

Garner entirely undermines them, however. Faced with the problem of a jail lacking bars on the cells, he makes a line on the floor in chalk and sprinkles red paint over it, evidence of the bloody consequences for anyone trying to escape. When Pa Danby (Water Brennan) comes to threaten him, he sticks his finger in the end of his pistol (“You know, he strikes me as being a lonely man” he tells Elam’s "town character", now appointed as his deputy). When a pack of rowdy cowboys ride in to town, he casually trips them up with a rope tied across the main street. And when the Danbys hire guns to despatch him, and he’s frustrated at being expected to shoot them every time, he sees one of them off by chasing him out of town, throwing stones at him.

A number of the cast would return for the semi-sequel. Elam, who also appeared in Leone’s film that year (in the opening sequence), is the perfect broad foil for Garner’s ease, boggling his eyes and reacting with supreme density to any situation (“Thanks for pointing me out to him” comments Garner after an assassin fails at his task). M*A*S*H’s Harry Morgan is the mayor. Kathleen Freeman has an amusing scene discussing how mad Morgan’s daughter Joan Hackett (hiding in a tree) is with Garner.

Hackett is a bit too full-on, to be honest, such that it’s difficult to work out what Garner’s supposed to see in her (aside, to be fair, from her being very rich). Her up-to-eleven schtick is not unlike the score from Jeff Alexander in that regard, inclined to punctuate every possible moment with Komedy accompaniment.

MVP is probably Dern, though, who had already sufficiently etched out western thug roles by this point (Will Penny, Hang ‘Em High) that he could spoof them. His studied thickness is a joy to behold, and his scenes with Garner sparkle even more than the latter’s with Elam: his outrage at Garner hoodwinking him into believing his gun isn’t loaded, and announcement to his family that he knew the attempts to bust him out would fail on account of how he helped to put the bars in extra securely. Perhaps not a comedy that will have you rolling around in the aisles but that’s to advocate it’s wry, knowing humour.