I made a crazy risk, a gamble, and it’s about to pay off. 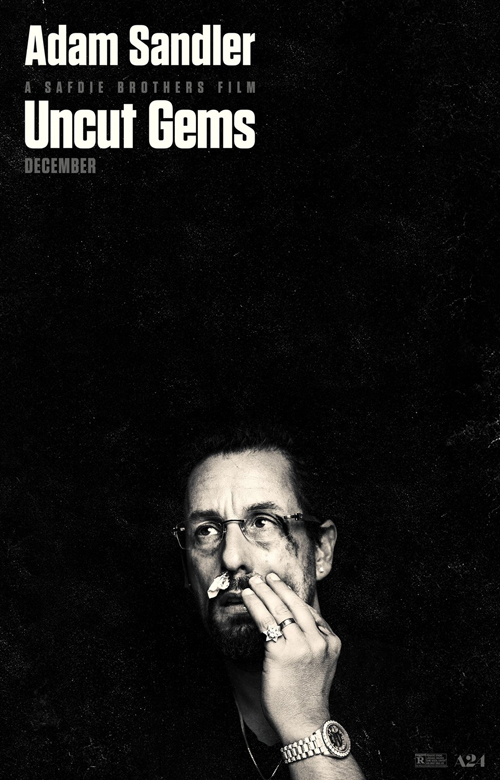 (SPOILERS) Time for another ADD-addled exercise in nihilism from the Safdie brothers. Only this time, it’s anchored not so much by a head-turning as an in-your-face, yelling, kicking, screaming, fully-committed, fully-caffeinated, dazzling but utterly exhausting performance from Adam Sandler. Uncut Gems has received many plaudits, and those for Sandler are entirely deserved – it’s a highly convincing piece of acting, one that ought to have merited an Oscar nod – but the film as a whole merely reconfirmed my takeaway from the also-acclaimed Good Time; that the Safdies’ sensibility, if you can call it that, since it suggests something with some degree of restraint or sensitivity, is probably not for me.

The desire to put viewers through two-and-a-quarter suffocating hours of Sandler’s inveterate gambler’s successive attempts to undo himself is a fairly twisted, sadistic enterprise on their part, and thus one you’re relieved to be released from, by any narrative means available. If you engage with their mission statement, then Uncut Gems undoubtedly quite an achievement, but I come down on the side of those criticisms, the few and far between ones, that the picture is all surface bluster. It’s all about the freneticism and the breathless chase, without pause for an interior view that isn’t up the lead character’s bottom – unless you call his minute of “I’m so sad. I’m so fucked up” wallowing after being beaten up introspection – or reflection enough to consider what’s under the hood of this character, and what makes him tick, what fuels his addiction. As such, Uncut Gems is rather shallow, inducing a narcotic high but a rather unpleasant one. More akin to a panic attack brought on through sniffing glue.

Sandler’s Howard Ratner is the movie’s engine, all fired up and raring to go, but that’s all the Safdies have got. At times, with Howard’s need to balance his various books as he evades or doesn’t his loan shark brother-in-law Arno (a glassy-eyed Eric Bogosian) and tries to pull himself out of whichever insane new bet or deal he has made while juggling his overloaded personal life, I was put in mind of Carlito’s Way – the ending of that film surely had some influence on this one’s – but that’s an infinitely more elegant, considered work.

The Safdies pride themselves on their grubbiness and no doubt wish they were actually living in the 70s. Even when they pull virtuoso moves – macro shots opening and closing the movie – they’re weighted towards crudity (a colon exam, passing through the bullet hole in Howard’s head) rather than the sublime (the precious uncut opal Howard has purchased, somewhat less precious than he had hoped). This circular motif also brings to mind their structure for Good Time, but the only thematic impulse one could take away from Uncut Gems would be a glib one (the picture opens extravagantly on the mining of the opal, but aside from Kevin Garnett interrogating Howard on his profit margins, the supply chain of precious gems is left unturned). As for the final “shocking” moments, the only surprise would have been if the happy ending Howard suddenly seems to be heading for had happened (particularly since this is the second time the picture has played the card of the unlikely bet paying off, following “the dumbest fucking bet I’ve ever heard”).

There are good performances throughout, from Lakeith Stanfield as an associate of Howard’s (bringing him Garnett), from Fox and Menzel, from Judd Hirsch as Howard’s father-in-law, from Bogosian, and from authentic neighbourhood flavour in the likes of Keith Williams Richard’s vicious enforcer and Wayne Diamond as a rich gambler. And there are some smart conceits; if the run around at Howard’s daughter’s school play doesn’t really distinguish the setting from the threat because everything is at the same pitch, the idea of the family Passover dinner, with Arno glowering at him on neutral ground, is neatly conceived. Daniel Lopatin’s jazz-synth score, meanwhile, manages to work on the nerves as much as the directors’ other choices, heightening rather than diminishing the antic spell, entirely indifferent to the frenzied events it accompanies.

I don’t doubt the Safdies are masters of achieving exactly their desired effect, but whether that effect is a laudable one is open to debate. At one point, during a moment of regret on Howard’s part after he has dispensed with girlfriend Julia (Julia Fox) and suggested he and soon-to-be-ex-wife Dinah (Idina Menzel) should try again, she informs him, “I think you are the most annoying person I’ve ever met. I hate being with you. I hate looking at you. If I had my way, I would never see you again”. It isn’t difficult to apply that to Uncut Gems as a whole.