It’s not a letter if it doesn’t have postage, right? 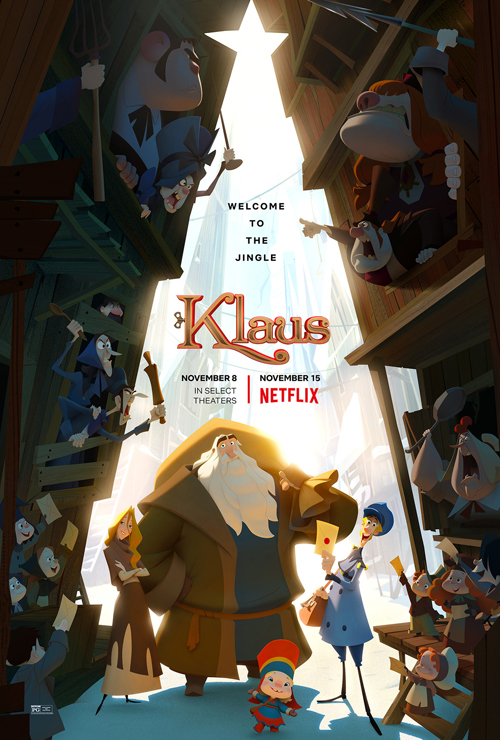 (SPOILERS) I guess Netflix’s negligible quality control, movie-wise, has to score a positive occasionally, and this Christmas – but fairly loosely so, ironically, in that the trappings are in scant supply for the most part – animation is an unlikely delight. A Santa Clause origins tale doesn’t sound like the stuff of a great movie – origins stories so rarely are – but Sergio Pablos’ feature debut Klaus is stylistically distinct, emotionally compelling, and frequently very funny.

Which is a godsend in animation arena where everything feels focus-tested to within an inch of its life, such that even the quality end of the market – the Pixars – are tonally and visually amorphous, however diverse their subject matter. Thus, we’re treated to a hand-drawn animation, the mention of which now seems to hearken to a forgotten age of antiquity (I wasn’t even sure Klaus wasn’t just faux-hand-drawn until I checked) and quirky character designs that do suggest someone who worked on the Disney renaissance (most particularly Hercules).

But these would only go so far if a strong screenplay wasn’t in place, and the one from Pablos with Jim Mahoney and Zach Lewis hits all the right notes, coming at the Christmas favourite from an entirely fresh angle. Jason Schwartman’s Jesper Johansson, an indolent waster, is sent by his despairing father, a rich Postmaster General, to the remote and desolate island outpost of Smeerensburg, with instructions to turn it around within a year or he’ll be cut off (six-thousand letters must be posted). Jesper finds an entirely unwelcoming town built on perpetual feuding, with little in the way of prospects for post (or schooling, as evidenced by Rashida Jones’ teacher turned fishmonger). It’s only when he meets the reclusive Klaus (JK Simmons), a woodsman with an arsenal of toys, that he hatches a scheme to meet his targets via the towns’ kids’ desire for playthings. While his motives are entirely mercenary, however, his plan sets off a chain reaction, from kids needing to learn to write (to send letters to Klaus) to the knock-on of their getting on with each other spreading to their parents.

The skill of the screenplay is making these twists look effortless and even inspired, as the principles of Christmas gift giving vis-à-vis Santa (the naughty list, doing good deeds, secretly smuggling presents into houses, even the soaring sleigh) are introduced and cemented on the fly. Naturally, there’s a strong moral, but it doesn’t feel chokingly forced as these things often do in family fare, and Jesper’s assumption that “Everybody’s out to get something, right?” is undermined, not least by himself (admittedly the philosophical probing of selfishness only extends so far, but it wouldn’t really do to cynically attribute every action to selfishness on some level in such fare).

Schwartzman’s performance reminded me a little of David Spade’s in Emperor’s New Groove, and he handles Jesper’s growth with lightness and verve. Simmons, meanwhile, is simply superb as Klaus, particularly in judging the depths of his loss. When it comes to his becoming the legend we know (“What happened after that, I can’t even comprehend”), the film might easily have choked with sentiment, but the emotion feels earned.

If there’s a criticism of Klaus, it’s a minor one; the principal families, the Ellingboes and the Krums, are granted insufficient time to develop as villains, so when they’re called upon to advance the plot (by implementing destructive measures towards Jesper and Klaus’s plans) it lacks the extra edge it might have had. But Klaus is undoubtedly a great movie, superbly styled (the terrifying hounds), with lovely visual gags (Alva introduced with a fish head) and a fine score (from Alfonso G Augilar). Even the cute kids (in the form of the Sami girl) aren’t irksome. Plus, it has that all-important indicator of a great animation: boggle-eyed chickens.