It's a simple story that I complicated. 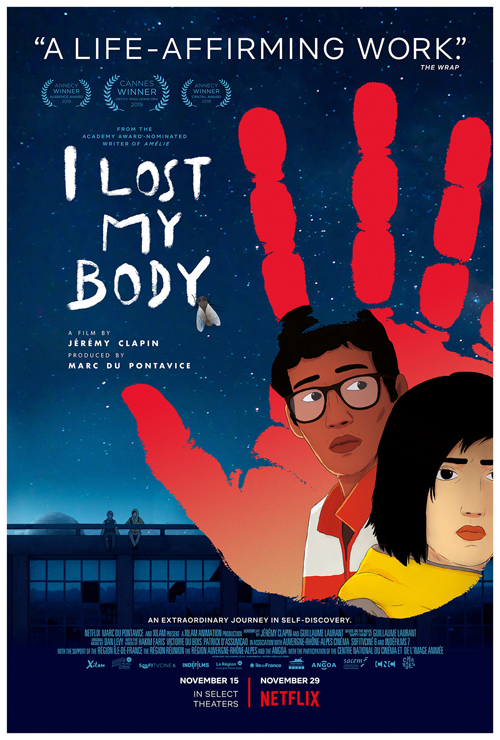 (SPOILERS) A real oddity, so nice to see it garnering Oscar attention, this animation from Jérémy Clapin might sound, on first brush with the premise, like the ghoulish offspring of Evil Dead II: Dead by Dawn and Oliver Stone “classic” The Hand. I Lost My Body concerns a severed appendage attempting to reunite with its owner, but really, it’s a low-key affair, one part fever dream of the hand’s eventful journeying, the other the tale of Naoufel (Hakim Faris, but Dev Patel in the dubbed version, which I didn’t watch), a pizza delivery boy who takes up carpentry in an attempt to get close to librarian Gabrielle (Victoire Du Bois).

It doesn’t take an excess of brainpower to work out that Naoufel will, in due course, end up minus one said appendage, even before he starts work for carpenter Gigi (Patrick d’Assumçao); the two stories have to be linked somehow, even if it’s over an hour before the fateful event with a jigsaw confirms this; as you might guess, this is not a kids’ animation, what with the travelling hand side of the equation being decidedly less whacky than Thing in The Addams Family, and the travails of Naoufel, who is, despite his innocence of intent, effectively stalking Gabrielle, and whose cousin is a crude grotesque obsessed with priapic doodles and gestures.

But I Lost My Body’s tone is most informed by the melancholy, atmospheric soundtrack from Dan Levy, which emphasises the pauses and cosmic contemplation in both Naoufel’s life and that of his hand. The hand’s journey, beginning in a lab, finds it up against a pigeon (which it strangles), a bin truck, an escalator, a subway, rats, ants, ice, a guide dog, and includes an encounter with a baby, before soaring across a motorway holding onto an umbrella as an astronaut waves to it from below. Finally, it attempts to re-bond with its former owner, but cannot. In some respects, this is the most interesting part of the picture, and one almost feels the abstraction here didn’t need grounding with an explanation (such as it is).

Naoufel’s journey is a one where Gabrielle represents a light in an otherwise discontented existence (living with his uncle, servicing a job he’s hopeless at), and while his securing the job with the ill Gigi is opportunistic, he learns that he really likes it, so the chain of events leading to his accident feel like a particularly cruel twist of fate; indeed, the climax of the movie flirts with the idea that Naoufel may have intentionally leapt to his death via a tape recording Gabrielle finds, before she and we realise he succeeded in his daredevil feat and that he will persevere rather than admit defeat. As for his ghost appendage…

Clapin’s style marries 2D hand-drawn animation with CGI and live actors, and I found it noteworthy, but varyingly effective; the matter of factness and lack of excessive stylisation works best, again, for the hand, but the overall effect, in tandem with a story of subtlety and sensitivity, is a rewarding one.

Look out the window. Eden’s not burning, it’s burnt.

February 02, 2021
Reign of Fire (2002) (SPOILERS) There was good reason to believe Rob Bowman would make a successful transition from top-notch TV director to top-notch film one. He had, after all, attracted attention and plaudits for Star Trek: The Next Generation and become such an integral part of The X-File s that he was trusted with the 1998 leap to the big screen. That movie wasn’t the hit it might have been – I suspect because, such was Chris Carter’s inability to hone a coherent arc, it continued to hedge its bets – but Bowman showed he had the goods. And then came Reign of Fire . And then Elektra . And that was it. Reign of Fire is entirely competently directed, but that doesn’t prevent it from being entirely lousy.
Post a comment
Read more