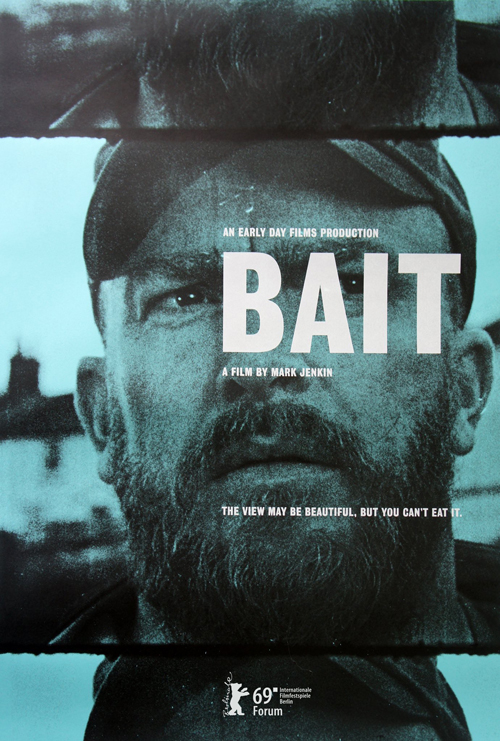 (SPOILERS) Deserving winner of the BAFTA for Outstanding Debut by a British Writer, Director or Producer – well, despite it not being Mark Jenkin’s debut feature, that is – Bait’s originality comes less from its storyline, the very recognisable subject matter of impoverished locals’ charged relationship with the affluent class descending on their Cornish fishing village, buying their properties and pints but failing to put anything of substance into the community, than the way in which Jenkin approaches the material, shooting on 16mm with a Bolex, with all the handmade imperfections that entails. Added to which, he has no compunction in experimenting in the edit, sometimes to mesmerising effect.

Martin: Been modernised... Looks a bit like a sex dungeon.

Jenkin uses a small story to create big impact, making a virtue of his very limited budget, be it through judicious choices on the (entirely) post-dubbed soundtrack (exaggerated sound effects, from dropping crates to approaching boot steps) or the close-ups that etch its characters’ thoughts across the screen – particularly lead Edward Rowe as brooding, surly fisherman without a boat Martin Ward. Peter Bradshaw snapshotted Bait as “EastEnders directed by FW Murnau”, which is something of an exaggeration but nevertheless an amusing way to sell its appeal. The imagery is that of the antique, textured with over-exposed frames, crackles, hairs and dirt, but the storyline is immediate and relevant, the old ways slowly but surely giving up the ghost to the new, as if picking up were Local Hero left off.

Martin is feuding with his brother (Giles King), who has sold out by providing cruises around the bay to pissed-up tourists. His nephew (Steven Ward) wants to work with him to get back at his dad, but Martin, trying to save for a boat, is barely scraping by, having to lay nets on the shore, hire a lobster pot and count on generous prices for his few fish from the local pub landlady Liz (Stacey Guthrie). He’s at loggerheads with the well-off suburbanites the Leighs (Simon Shepherd and Mary Woodvine), who have bought his parents’ cottage, and who provide holiday lets. For all that the presentation is key, it’s Rowe’s performance, featured in the majority of the scenes, that really sells Bait. Martin is simmering with frustration, censuring himself from letting it spill over into violence, and Jenkin ensures this tension is in the air throughout, not least through Roeg-esque flashes of potential ruction or fallout; as a consequence, it isn’t at all surprising when tragedy occurs.

Martin: You fuckers bring everything down with you and take it home again.

Some choices become visual red herrings – I could have sworn the money tin perched on the kitchen windowsill was ripe for thievery, but instead, it pays off when Woodvine’s Sandra puts money into it – while others show a spry sense of humour on Jenkin’s part. A high-noon showdown in the pub, where Martin confronts the Leighs’ son Hugo (Jowan Jacobs) with the lobster pot he broke into, looks destined for a violent altercation; instead, Martin forces the lad to mend the pot before saying “Thank you” and exiting, leaving the patrons staring in silence at the guilty party. Earlier, there’s a masterpiece of overlapping conversation, or rather intercut conversation, that would send Robert Altman into a tailspin, as Hugo’s petty argument with Wenna (Chloe Endean) over “winner stays on” pool rules contrasts with Martin’s much more pertinent one with Liz over his relationship with his brother.

Sandra: You didn’t have to sell this house.
Martin: Didn’t we?

Yes, you could make the charge that the portrait of affluent vultures feeding on the village tends to caricature, closer to the kind of cartoonishness of Mike Leigh, even if Jenkin offers the occasional olive branch (Sandra may fume at Martin, but there’s the money tin scene, and her giving short shrift to the guest complaining about Steven’s boat waking him in the morning). I don’t doubt, however, that such episodes as depicted here come from personal experience, and the picture is, anyway, an intentionally heightened affair. At times I was put slightly in mind of Hal Hartley, and the way he uses space and silence and specific framing to create atmosphere (just not usually in black and white and on a Bolex). Hopefully, Bait’s success means Jenkin will have more resources at his disposal going forward, but I don’t think he should necessarily quit using that Bolex. He’s created an inimitable style with it.