Oh no, I’m not going to follow you and get shot. If I was half-shot, I’d follow you 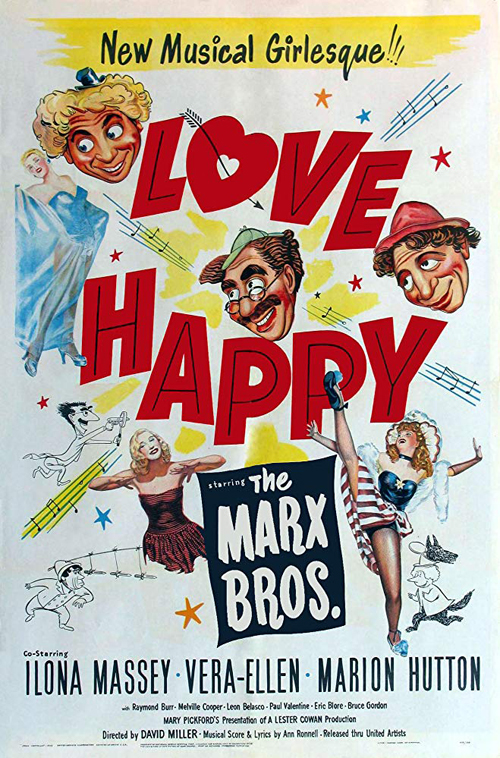 (SPOILERS) And so the Marx Brothers’ (collective) screen career ends with a decrepit whimper. It’s very obvious that Love Happy was initially developed as solo project for Harpo – he falls in love! – since he gets the lion’s share of the scenes. More surprising is that Groucho wasn’t in fact a late-stage addition; he provides the narration, but only really intrudes on the proceedings at the very end. And Chico? He mentions tootsie-frutsie ice cream.

Female Client: Some men are following me.
Grunion: Really? I can’t understand why.

There’s enough plot to be getting on with, some of it quite promising, since it revolves around the theft of the Royal Romanoff diamonds, hidden in a tin of sardines and unknowingly swiped by Harpo, who is feeding a cast of cash-strapped theatrical types attempting to put on the titular musical revue. Chico is Faustino the Great, professing to be a mind reader, while Groucho is private detective Sam Grunion, employed to find said diamonds and eye up Marilyn Monroe in her very brief film debut.

Groucho, then. He looks different – real moustache and eyebrows – and engages in some passable introductory mockery. Of lead Mike Johnston (Paul Valentine): “Interesting dance, isn’t it? He learnt it fighting off bill collectors”. And Maggie (Vera-Allen, sometime Danny Kaye co-star): “She’s a dancer too. But it’s hard to tell when she’s sitting down”. But he’s in it so little – three-ish scenes, pretty much – and his lines aren’t exactly zingers. Ilona Massey as villain Madame Egelichi ought to be the inspiration for a slew of great Groucho gags, but he’s limited to the so-so likes of “Oh no, I’m not going to follow you and get shot. If I was half-shot, I’d follow you”.

Grunion: I am the same Sam Grunion who solved the international uranium-mining swindle. Scotland Yard was baffled, the FBI was baffled. They sent for me and the case was solved immediately: I confessed.

Groucho gets one proper scene with each of Harpo and Chico (the latter not even sharing a shot). Chico naturally has a piano interlude. He also has a Hat erection gag. Groucho used to say the movie was made as a means to pay Chico’s gambling debts, although Harpo’s initiation of the project makes that seem less likely (but it’s nevertheless a good story, particularly since the movie is rubbish). He does get to play cards with a dog, however.

Mike Johnson: Could you love a heel that’s been repaired?

Accordingly, most of the proceedings hang on Harpo, and early on, the bushy-haired shoplifter has a couple of moments. The best of which is easily a protracted sequence in which Massey’s thugs (including Raymond “Perry Mason” Burr) empty his voluminous pockets, producing such choice items as several legs of a shop dummy, a welcome mat, a barber’s pole, a block of ice, a sled and a live dog. He is subsequently tortured, forced to smoke rope, put on a rack, subjected to food and water torture and has an apple placed on the top of his head to be shot at – which he eats, having snatched the gun and put it to his own head. Harpo also has a pet penguin. He is, however, at his furthest distance from the randy animal of the early films, a hapless unrequited romantic in love with Maggie (who despite a falling out with Mike, a bit of a dick, ends up with him).

Faustino: You want I should read your mind again? All right, start thinking... You’re thinking the same thing you thought about yesterday. And the day before… That’s the only thought-a you got, huh? You’re in love.

With regard to his fate, Groucho informs us that Harpo disappears with the diamonds, not realising their value (thinking they’re the fakes). And appropriately, we learn Groucho’s Grunion has got hitched to Madame Egelichi. Love Happy feels like a botch, despite Frank Tashlin’s presence as a writer (Harpo gets a story credit), and serves as an illustration of how just one element of the trio being off does for the whole thing. Chico probably serves his take-or-leave-him function most seamlessly here, but Harpo isn’t a lead, and Groucho needs his fake moustache to fly.