Once Upon A Time in Hollywood… Ain’t that the truth. 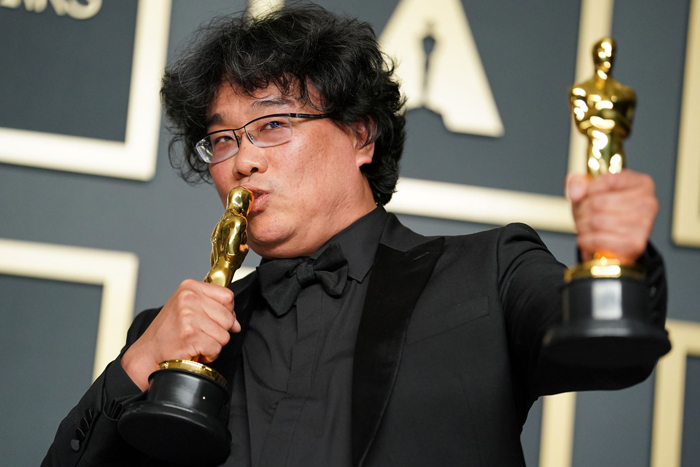 The Best Picture upset (most had it as a serious contender, but a long shot as a winner due to the dual nomination with Best International Feature and that one being in the bag) can only be a good thing for the ceremony, a further strike against predictability (whether or not it was a response to Green Book and the ongoing campaigning over representation among nominees). While some are grumbling about dual Best Picture category wins, anyone familiar with the BAFTAs is more than used to that sort of thing. Most of the rest of the biggies, director aside (although, not unexpected), were widely expected, so it also means that, in an era where the race is scrutinised to death, that it hasn’t exhausted itself long before the ceremony.

And the ceremony? I only caught the highlights, very fortunately by the look of some of those musical numbers. Some decent Chris Rock gags (“Jeff Bezos is so rich, he got divorced and he’s still the richest man in the world"; “Marty, I gotta tell you, I loved the first season of The Irishman”). Bring back the MC, though. Don’t act like you don’t want one. Be honest that no one has the cojones to brave the Twitter storm; picking the right one can mean ratings, apart from anything else.

“We never imagined this to ever happen.” Nor did 90% of the Oscar pundits. I’m relieved it wasn’t 1917, which represents Hollywood at its most unremarkable and self-satisfied (technical achievements aside).

Result! It also underlines that there was enough solidarity behind the Best Picture that it wasn’t merely a flukey result of the preferential vote (I also think Bong’s a much better director than he is a writer, but that’s true of 99% of directors who are directors first).

What kind of medications is Joaquin on? Not ones you want to take just before you go up on stage. You certainly wouldn’t want to get into a staring match with him. That said, I can’t fault most of what he had to say.

Was Renee bored of all the awards by this point? She seemed to be forgetting her speech as she delivered it. One of those acting wins (others include Jeremy Irons, Jessica Lange, Julianne Moore and Jeff Bridges) for a film no one bothered seeing.

Best Supporting Actor
Winner: Brad Pitt (Once Upon a Time in Hollywood)
I guessed: Brad Pitt

Inevitable. Brad’s speechwriters deserve an award for their work this season.

Gushing with the best of them (“Some say never meet your heroes, but I say, if you’re really blessed, you get them as your parents”), but mentioning Bruce in an acceptance speech is always a positive.

There’s discussion one whether Bong’s tally should count as equalling Walt’s (since International Feature goes to a country). I think it should. I mean, who’s taking the thing home?

I had the winner as my interesting choice, because Taika threw out the book, rather than because it’s a good screenplay (it stinks). So Waititi’s officially part of the establishment now. He didn’t even take the piss in his speech.

Outrageous that this merely decent fourquel won when at least two others were far superior. I guessed a Pixar win, only in the wrong category.

I don’t know, you go an eternity of nominations without a sniff of a win, and then the statuettes won’t stop coming.

Greta has to make do with a win in the frocks department. Very gender-stereotyped, that.

Let’s be clear: this was not for the work done on Nicole Kidman.

Can’t argue with that.

I had the 1917 sound award in the wrong category.

All women are superheroes? Yeah, lap that nonsense up. Hildur had sure been prepped too.

Wouldn’t it have been funny if hadn’t won this but still won Best Picture? No? Okay, then.

Everyone was saying American Factory, but I just wasn’t having it. Netflix got two Oscars, then.

The mistake of thinking, because you didn’t think much of something, it surely won’t win (Jojo Rabbit syndrome). Still, a flawlessly on-message speech, that one.

I should have gone with the received wisdom there too.

I wouldn’t call anything in this category an upset, but I don’t think The Neighbor’s Window was generally predicted.