The people we don’t want here are leaving! Force them to stay! 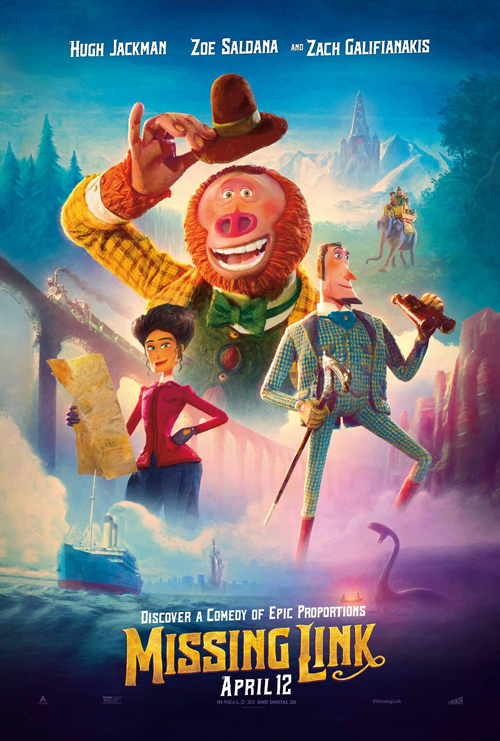 (SPOILERS) Laika’s mixed animation fortunes continue, to the extent that it’s difficult to see how they’re going to be able to sustain themselves for much longer. Kubo and the Two Strings was their best feature (closely followed by Coraline), but entirely failed to justify its budget at the box office. Now Missing Link arrives, at a significantly more expensive $100m estimate, and completely flops (a paltry $26m worldwide). The reason? It isn’t a bad movie – certainly more appealing than either ParaNorman or The Boxtrolls, both of which fared much better – so perhaps there’s an aesthetic issue above and beyond their favoured stop-motion medium. It isn’t for nothing that Pixar’s designs are of a ruthlessly audience-friendly ilk.

Of course, Aardman might be argued to have a similar problem with their human characters. Are kids really going to get behind Mr Susan Link, not exactly the cutest looking Bigfoot there is? Which isn’t to suggest Laika shouldn’t stick to their artistic guns, but if that amount of money is going into their features – and surprise, surprise, Annapurna, always with an eye out for a flop, co-financed it – they probably need to be thinking about these things.

Missing Link does feel more like the kind of fare Aardman might have made than any of Laika’s previous pictures; a story of a friendly, educated Bigfoot wishing to find others of his kind, with the help of self-regarding but likeable cryptozoologist explorer Sir Lionel Frost. The screenplay comes from director Chris Butler, who was also responsible for ParaNorman, and while it has its perks, most notably Hugh Jackman’s vocal performance as Sir Lionel (the character even looks a bit like Jackman), for much of the running time it can’t find a footing that would make it really distinctive.

The voice cast are solid picks, with the possible exception of Zach Galifianakis as Link, ensuring an already unremarkable design is given standard-issue comedy character schtick. Zoe Saldana’s Adelina seems to be modelled on Salma Hayek (and Butler remembers the memo that she must be a strong independent movie character woman right at the end when sends her off on her own adventure). Timothy Olyphant is good as the bounty hunter varmint, but underserved a villain who never becomes anything truly enjoyable. Stephen Fry, Emma Thompson, Matt Lucas and David Walliams also appear in minor parts.

The proceedings take Sir Lionel from Loch Ness to the Pacific Northwest, to California, to the Himalayas and Shangri La, and for 95% of the running time, there’s nothing that outright fails, but nothing that really hits the bull’s eye either (although, the opening with the monster suggests Missing Link will be sharper and more idiosyncratic than it is, with Sir Lionel instructing his assistant to “Break out the bagpipes” in order to attract Nessie). There are numerous amusing sight gags (during a free-for-all barfight, one of the pugilists sets upon a moose head) and there’s a chicken gag, which is essential for a self-respecting animation. It isn’t one of the best, though, with wise elder Gamu wearing one on her head (during this sequence, Link also eats some yak poo cookies, so there are additional points for requisite excrement gags). “There was a nun. We mugged her” is also the kind of irreverence that should be compulsory in a kids’ movie,

But Missing Link only truly comes into its own during a superbly executed (literal) cliffhanger climax, juggling elements of various parties dangling, dangling, attached to other parties in danger of being prevented from clinging on to a Himalayan cliff. It’s up there with the very best animated sequences ever, and on that basis alone makes it easy to see why the movie merited an Oscar nomination. Missing Link is missing something overall – inspiration goes walkabout somewhere along the line – but it’s worth it for the big finish.