You can't gunfight a man sitting on your ass. 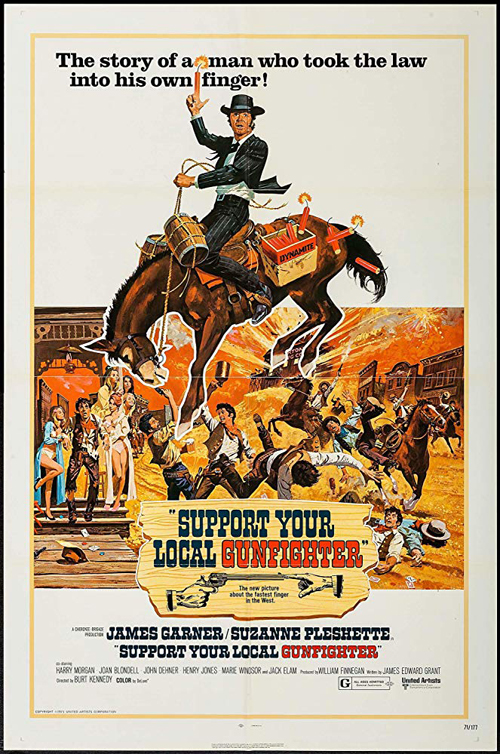 (SPOILERS) I don’t think I had it clear in my head which of the Support Your Local… films was which, as after (possibly) thirty years, they tend to blend into one. If pushed to say which was better, I’d have probably gone for the one with “Swifty” Morgan, where Garner trips the horseback cowboys up with the rope. The former character being from this film, the latter sequence from Support Your Local Sheriff. As it turns out, Support Your Local Gunfighter is the inferior movie in most respects, although kudos to it for the name Swifty Morgan, which is a keeper.

Garner’s a more traditional flawed comic creation here as Latigo Smith – a dog pees on his leg as soon as he gets off the train in Purgatory – running from an entanglement with a madam, desperate to rid himself of a troublesome tattoo, and afflicted by a financially disadvantageous gambling habit (for fans of the number 23 enigma, here he keeps putting $4,600 on 23, which only pays off in the last scene). He’s an unabashed opportunist and liar, happy to front Jack Elam’s Jug May masquerading as Swifty in order to engineer a scam profiting from the tensions between warring mining companies (one headed by the returning Harry Morgan, the other John Dehner).

Accordingly, while Garner’s still able to pull off the cool cad stuff (“I don’t like to work. Tires me out”; “You hit that fella from behind!” exclaims Elam, “Just as hard as I could” replies Garner), the picture tends to work better when the spotlight is on Elam and his impostoring; his attempts to draw like a professional gunslinger (“No, I’m slow. It’s just you’re even slower” Garner informs him) and his sense of duty and honour that requires him, and thus the reluctant Garner, to face the real Swifty (Chuck Connors) when he comes to town seeking a reckoning with the man using his name.

There are some fairly rotten subplots here, including Harry Morgan wooing The Waltons' Ellen Corby (playing Dehner’s sister) and the pugilistic behaviour of leading lady Suzanne Pleshette, officially set on returning to Miss Hunter’s College on the Hudson River, New York, For Young Ladies of Good Families. But if Pleshette’s character is on the irksome side, she’s actually very winning (so in stark contrast to Joan Hackett in Support Your Local Gunfighter).

The best part of Support Your Local Sheriff is probably the looney tunes ending, however, in which Connors, getting the deadpan exactly right, manages to shoot himself in the duel and pleads “Don’t let me die with my boots on!” while the latest mine explosion – which extraordinarily uncovers gold in the local brothel – manages to blow off Garner’s tattoo (“Oh, now we can get married and have a picnic!” exclaims Pleshette). Elam, meanwhile resumes the to-camera monologue that ended the previous movie, telling of the various characters fates: “And me? I go on to be a big star in Italian westerns”.