Demon, eh? Well, it's no more far-fetched than your gillman. 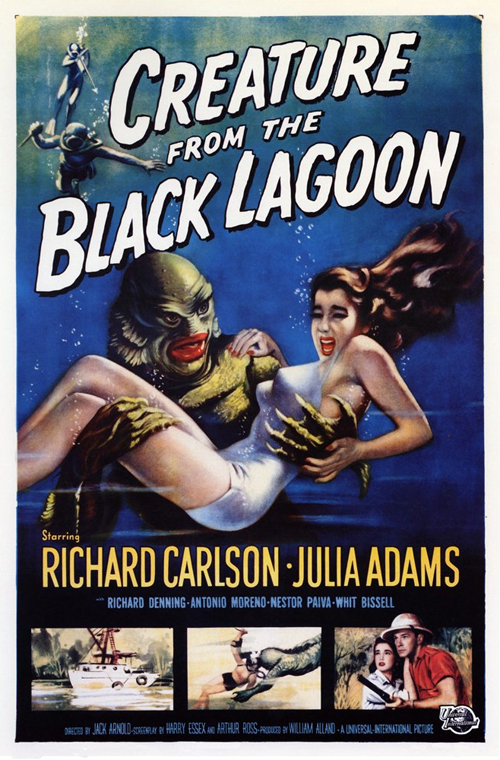 The Creature from the Black Lagoon
(1954)

(SPOILERS) Jack Arnold’s classic Universal horror isn’t especially impressive in the cold light of day (or absent the thrills, frills and gills of 3D). In terms of characterisation and atmosphere, The Creature from the Black Lagoon is a bit of a cold fish. Indeed, it’s only that cold fish (man) who evokes much of a response at all.

Arnold had already established his 3D B-movie credibility with It Came from Outer Space when that movie’s producer William Alland came up with a treatment based on a tale he’d heard a decade before about half-fish, half-human creatures living in the Amazon River. Perhaps his most inspired conceit was to give the concept a Beauty and the Beast twist, and it’s this that, just about, lends the picture its resonance. Gill Man is the Beast if the Beast had been stabbed, repeatedly shot, repeatedly poisoned, repeatedly harpooned and set alight. And all because he took offence at a bunch of landlubber interlopers on his territory. And had the hots for their woman Kay Lawrence (Julie Adams).

Adams is fairly anonymous, cast because she was on the payroll and has a robust swimming cossie. There’s some degree of entertainment value in the clashes between hero David Reed (Richard Carlson) and expedition financier Mark Williams (Richard Denning), the latter not especially concerned about the level of injury he inflicts upon the creature. However, neither are the most engaging of actors. Their guides to the Amazon are Captain Lucas (Nestor Paiva), characterised by his thickness (“Hey, what kind of fish do this?”) and his also thickly-characterised, disposable crew (“My brother was dragged into the water by a demon!” explains one). Pertaining to which, when Edwin (Whit Bissell) is so horribly wounded that his entire head needs wrapping in bandages, David throws a wobbly, exclaiming “if he dies, what a useless waste of experience and ability!” In contrast to the expendable crew, presumably.

The screenplay, from Harry Essex and Arthur A Ross (Gary’s grandad), includes some notable idiosyncrasies amid the general B-grade stodge, including an introduction that manages to take in God creating the Earth and five billion years of evolution. There’s also much mention of the Devonian period as a testament to the feasibility of Gill Man existing here undisturbed all this time. Gill Man’s design is iconic of a sort, but there’s so little visual panache to William E Snyder’s cinematography that he isn’t shown off in an especially flattering light; it’s notable that both Snyder and Arnold would spend much of their subsequent careers on TV show rotations. The latter offers multiple shots of threatening gill-man clawed hands extending into frame, which is as funny as that sounds, while the underwater photography offers a remarkably clear, sandy-bottomed Amazon river for the divers to search for Gill Man.

The Creature from the Black Lagoon is now associated with the far superior, Oscar-winning The Shape of Water, of course, which directly resulted from Guillermo Del Toro’s time developing a remake for Universal (they didn’t like his ideas, quelle surprise); that was just one in a slew of potential updates, including John Landis’ (bizarrely positing Arnold returning as director, as if that would have been a good idea), John Carpenter’s (probably just as well, he wasn’t on such a hot streak by 1992, and what we ended up with was the forgettable Village of the Damned remake), Ivan Reitman, Gary Ross, Breck Eisner and Carl Rinsch. Post-Shape, I don’t expect Universal will be reviving the project any time soon, although you can never be certain, given they’re in a throw-anything-at-the-wall-and-see-what-sticks phase following the failure of Dark Universe, much akin to Warner and their DCU collapse.

The legendary qualities of The Creature from the Black Lagoon are buoyed by the generation who saw it first (most of the names associated with the first few planned remakes), but it just isn’t on a par with the main cycle of Universal classic monsters of twenty years prior. The movie has much more in common with the bug-eyed monster and alien invasion flicks of the surrounding period, although like the earlier Universal monsters flicks, it succeeded in spawning several sequels (one featuring Clint’s movie debut).