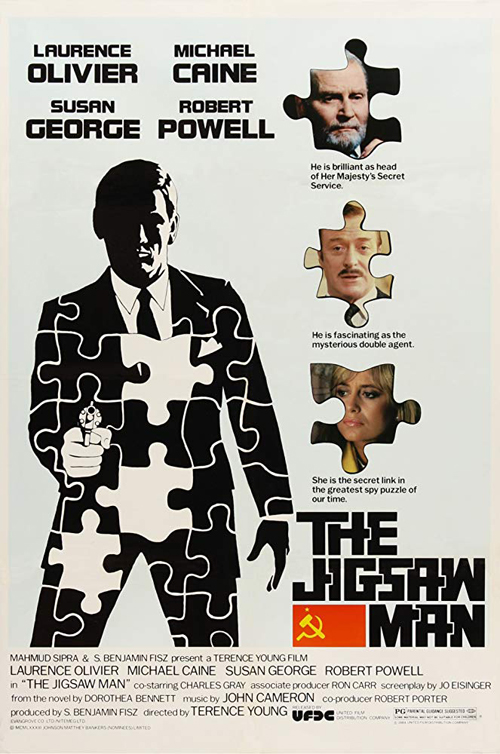 (SPOILERS) Michael Caine’s 80s career increasingly looks much more respectable when set against the “really will do any old shit” latter-day approaches of John Travolta, Nicolas Cage, Bruce Willis and John Cusack. In particular, his recourse to Cold War thrillers when all else failed and he was at a loose end for more than five minutes is now surrounded by a rather nostalgic, muggy grey hue. That doesn’t make The Jigsaw Man remotely any good, occupying as it does the bargain bin of even that spy thriller sub-genre, but it does have its incidental pleasures.

The prospect of Caine working with the first Bond director on a spy movie doesn’t so much seem tantalising as inevitable, but the stock of both industry professionals had, at this point in their careers, plummeted somewhat. Terence Young was unenviably able to boast having made one of the all-time biggest box office bombs in Inchon (during the production of which, Laurence Olivier, who can be seen here, admitted cheerfully “Nothing is beneath me if it pays well”: also Caine’s mantra). Caine had scored with Educating Rita, but also in quite recent memory hadn’t with Beyond the Poseidon Adventure, Ashanti, The Hand and Escape to Victory. The Jigsaw Man production proved beleaguered and was shut down due to funding issues, with both stars deserting the set until they were paid. So if the whole thing looks rather threadbare – you wouldn’t figure Freddie Francis shot it – that’s at least partly the reason.

Based on the 1976 novel of the same name by Dorothea Bennett (also Young’s wife, though lest you fear nepotism, Mike Hodges had apparently been trying to get it made a few years prior), Caine is former MI6 man and defector Philip Kimberly – geddit? – who is plastic surgerised, against his will, trained up in martial arts (hilariously illustrated with a “training montage” and a dead ringer for Austin Powers’ “judo chop”) and sent back to blighty to secure a MacGuffin documents naming all the KGB operatives in the country (how useful this would be twenty years on is surely debatable). Despite the obvious allusion in name, Kim Philby is also mentioned several times during the movie, somewhat undermining the conceit. Richard Aylen, dubbed, plays the pre-op Kimberly, a man in his sixties, who once turned into Caine looks 42(!) and can leap around and off buildings to prove it.

With the KGB intent on killing him once he has done his job – rather than, as promised, set him up in Switzerland – Kimberly requests asylum as soon as he reaches London and attempts to play his own game, contacting the new MI6 head Admiral Sir Gerald Scaith (Olivier) and his daughter Penelope (Susan George). Meanwhile, her boyfriend Fraser (Robert Powell), not in fact working for the UN but also an MI6 man, is put on the case by Sir James Chorley (Charles Gray, magnificently dissolute).

That Chorley turns out to be a Russian agent wasn’t something I expected, particularly, but on the other hand, no one here seems to be very up in arms about betraying one’s country. Scaith doesn’t even attempt to conceal his admiration for Kimberly, and somehow, despite beating hoteliers’ heads in, Phil warrants appreciation as a likeable bounder, surviving the fireworks of the finale and offering Scaith a plan that will secure a nest egg for his dotage.

Caine is always quite watchable, but he really isn’t trying here. George is stuck with a dim-watt character (“You stupid cow, the phone is tapped!” she harangues herself at one point, rightly). Powell has the nominal hero part, but not much to do with it, aside from a scene in which he has to contend with Grey in a bald cap and a dressing gown telling how his dome looks “like a prick”; there’s much talk of how the sexual strictures of the period were responsible for defections, but it seems like much too serious a subject for a film that’s otherwise so frivolously pulpy and unfussed.

It’s Olivier who takes the honours, attacking his every scene with humour and cantankerous gusto: “Go on, take a little wine with your turbot and be damned” he explodes at Gray, while relishing a whisky. And, once Gray has expired, ever attentive to appearances, he instructs an orderly, “Just see that his wig’s on straight, won’t you?”. If you want an 80s Caine spy thriller that has slightly more semblance of reality to it, you could do worse than check out the patchy The Whistle Blower. And if you want a suitably far-fetched one, The Fourth Protocol. The Jigsaw Man is, unfortunately, just rather anaemic.

The protocol actually says that most Tersies will say this has to be a dream.

August 20, 2015
Jupiter Ascending (2015)
(SPOILERS) The Wachowski siblings’ wildly patchy career continues apace. They bespoiled a great thing with The Matrix sequels (I liked the first, not the second), misfired with Speed Racer (bubble-gum visuals aside, hijinks and comedy ain’t their forte) and recently delivered the Marmite Sense8 for Netflix (I was somewhere in between on it). Their only slam-dunk since The Matrix put them on the movie map is Cloud Atlas, and even that’s a case of rising above its limitations (mostly prosthetic-based). Jupiter Ascending, their latest cinema outing and first stab at space opera, elevates their lesser works by default, however. It manages to be tone deaf in all the areas that count, and sadly fetches up at the bottom of their filmography pile.

This is a case where the roundly damning verdicts have sadly been largely on the ball. What’s most baffling about the picture is that, after a reasonably engaging set-up, it determinedly bores the pants off you. I haven’t enco…
Post a comment
Read more