I got poodles comin' out of my ass. 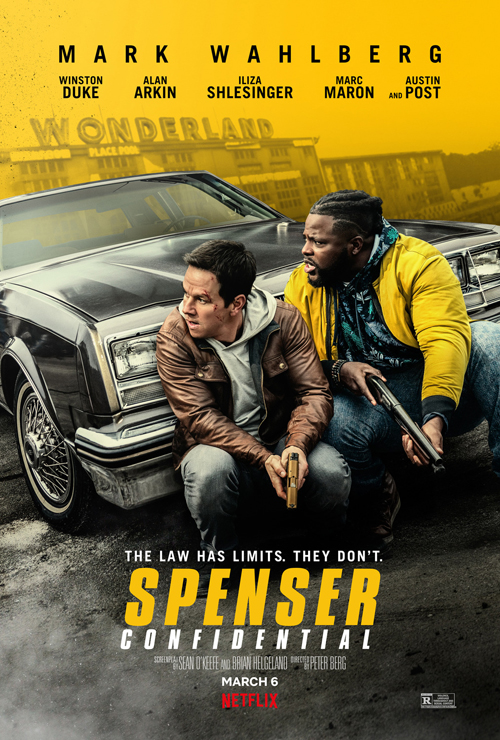 (SPOILERS) I’ve expressly avoided the previous string of jingoistic Peter Berg/ Mark Wahlberg collaborations, and probably would have skipped Spenser Confidential too, if not for the possibility that, besides it going straight to Netflix, it was offering a worthwhile take on Robert B Parker’s private eye – also the source of 1980s series Spenser: For Hire – and an entertaining role for Wahlberg, always better when he isn’t playing the straight-edge hero. It does neither.

The screenplay by Brian Helgeland and Sean O’Keefe seems only marginally concerned with fidelity to Parker’s PI, as in taking the name and throwing anything else out that doesn’t suit the makers. It’s based on Ace Atkins’ novel Wonderland, a continuation of the Spenser brand, but this version is all about police corruption and this Spenser, in his origins story, remains a former cop but served five years in the slammer for beating up a commanding officer.

Spenser Confidential is a chance for Berg and Wahlberg to engage in a standard “rebel hero righting wrongs” narrative, most of which involves the protagonist having repeated set-tos rather than engaging in any actual detective work (who would have guessed that Spenser’s former partner would turn out to be in on it? The movie’s that predictable). The appeal of the Boston PI to Bostonian Wahlberg is understandable, but that only makes turning it into such an utterly generic vehicle the more egregious. Even the rock soundtrack is tediously inevitable, striking up every time a fight begins.

There are a few bright spots. Alan Arkin, competing with Michael Caine for the sharpest octogenarian still working constantly, is on good form as Spenser’s old friend and landlord. Winston Duke can’t do a whole lot with the sidekick role of Hawk, but he’s a likeable presence. Bokeem Woodbine is also dependable, turning on first the charm, then the – naturally, he’s hardly going to be playing a good guy – villainy as the ex-partner. The standout is Iliza Schlesinger as Spenser’s ex, many of her lines exuding the air of someone who knows their improv.

Marky Mark? He’s forgettable, never given anything funny enough to make an impact and a bit of a bore when he’s doing sincere outrage. There’s a running gag of the poundings Spenser takes (“Man, you get beaten up a lot!”) and Berg handles the action serviceably. Although, there are moments (notably the editing of the “You smashed the Riviera through a restaurant” and the big truck climax) where you’d be forgiven for thinking they were using clunky outtakes from the TV show. I’d suggest Spenser Confidential is unlikely to enter the ranks of Netflix’s most viewed, but one can never assume anything with these things.