I hated it, but I wasn’t interested enough to listen to it again to find out why. 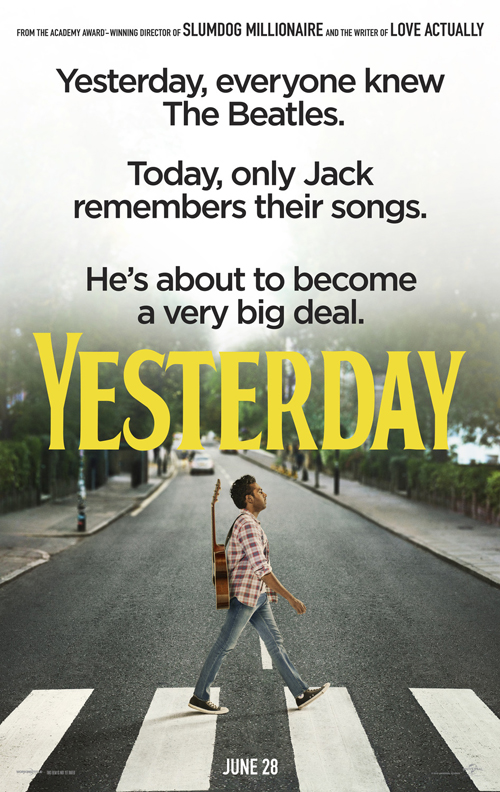 (SPOILERS) Danny Boyle’s paean to The Beatles via a scenario where they – as a band, rather than the individuals themselves – have been winked out of existence during a power surge is a cute enough Mandela Effect conceit; only Himesh Patel, and eventually two others, have any recall of their existence. But the result, scripted by self-professed muso Richard Curtis – see The Boat That Rocked, or rather don’t – from a story by Jack Barth, is weak swill. Apparently $10m of Yesterday's $26m budget was spent securing rights to use the Fab Four’s songs, but you have to ask, was it really worth it to hear a bunch of bad covers?

That’s a bit harsh maybe – they’re entirely serviceable – but Patel so much inhabits the unexceptional everyman, right down to his musicianship skills, that there’s never any lustre to his appropriation of their output. I thought the movie might have been onto something early on when Patel’s Jack Malick recognises this, with fame proving elusive even armed with their back catalogue (give or take), but then Ed Sheeran pops up in the kind of self-serving cameo Extras was partial to – he makes himself out to be a bit of a twat, so emphasising what a really great guy he must actually be – and Jack is soon on the road to fame and glory.

The picture has a number of problems, not least that Curtis has nowhere interesting or insightful to take the conceit once he has set it up. Sure, there are some amusing gags about the other alterations to this universe – no Coke, no Harry Potter, most bizarrely no cigarettes – the best of which is the complete absence of Oasis (“That figures”), even if Curtis, as About Time proved, is much too lazy/not anal enough to engage in the full Butterfly Effect ramifications of one piece going awry (Bowie somehow emerges exactly the same, although we didn’t get to see the Young Americans album, which would surely have taken a significant hit). But we know how this is going to scan, that Jack will eventually admit to his deceit and get the girl back (Lily James as his devoted manager). There are no surprises, except maybe that the world doesn’t revert to its natural order at the end, but by then, you hardly care.

Curtis makes a big deal of the focus-group marketing that swarms Jack, perhaps suggesting there’s no way those iconic album titles and covers would be repeated now (or just that Jack’s a pushover?) Katie McKinnon shows up as a merciless agent, and has a few good lines (“I’ve never heard you say anything interesting before. I don’t know why tonight would be special” about sums up the lead), but Yesterday isn’t making the best use of her. Robert Carlyle makes a decent stab at elder John Lennon, but it’s also an annoyingly glib gesture (“It all turned out just… fab”); wittier might have been having Ringo turn out to be a world-famous solo artist. Crucially, there’s never any “high” as Jack eventually finds his success, such that the picture is somewhat stranded in internal unease once the switch has taken place. What follows is too predictable to invest in.

Added to which, Curtis stuffs Yesterday full of his usual romcom tropes – everyone is incredibly middleclass, regardless of their cultural identity; Joel Fry’s stoner buddy is essentially Rhys Ifans reincarnated – but the actual rom of it entirely fizzles. There’s no chemistry between Patel and James (there wasn’t between Hugh Grant and Andie McDowell either, but there was enough else going on to keep Four Weddings and a Funeral fun), so there’s nothing hanging on their eventual reunion.

I’m guessing “It’s not bloody Fix You, Carol! It’s a great, great work of art” came about after Chris Martin turned down the role Sheeran took. He in turn receives a “No, leave it to the brothers” regarding his rapping and the blame for Jack changing Hey Jude to Hey Dude. James Corden appears, virtually guaranteeing the picture’s mediocrity. Yesterday, like so much of Curtis’ latter-day output is nothing if not that, content to coast on its likeably tepid averageness.

The protocol actually says that most Tersies will say this has to be a dream.

August 20, 2015
Jupiter Ascending (2015)
(SPOILERS) The Wachowski siblings’ wildly patchy career continues apace. They bespoiled a great thing with The Matrix sequels (I liked the first, not the second), misfired with Speed Racer (bubble-gum visuals aside, hijinks and comedy ain’t their forte) and recently delivered the Marmite Sense8 for Netflix (I was somewhere in between on it). Their only slam-dunk since The Matrix put them on the movie map is Cloud Atlas, and even that’s a case of rising above its limitations (mostly prosthetic-based). Jupiter Ascending, their latest cinema outing and first stab at space opera, elevates their lesser works by default, however. It manages to be tone deaf in all the areas that count, and sadly fetches up at the bottom of their filmography pile.

This is a case where the roundly damning verdicts have sadly been largely on the ball. What’s most baffling about the picture is that, after a reasonably engaging set-up, it determinedly bores the pants off you. I haven’t enco…
Post a comment
Read more

I don’t think you will see President Pierce again.

November 17, 2018
The Ballad of Buster Scruggs (2018)
(SPOILERS) The Ballad of Buster Scruggs and other tall tales of the American frontier is the title of "the book" from which the Coen brothers' latest derives, and so announces itself as fiction up front as heavily as Fargo purported to be based on a true story. In the world of the portmanteau western – has there even been one before? – theme and content aren't really all that distinct from the more familiar horror collection, and as such, these six tales rely on sudden twists or reveals, most of them revolving around death. And inevitably with the anthology, some tall tales are stronger than other tall tales, the former dutifully taking up the slack.